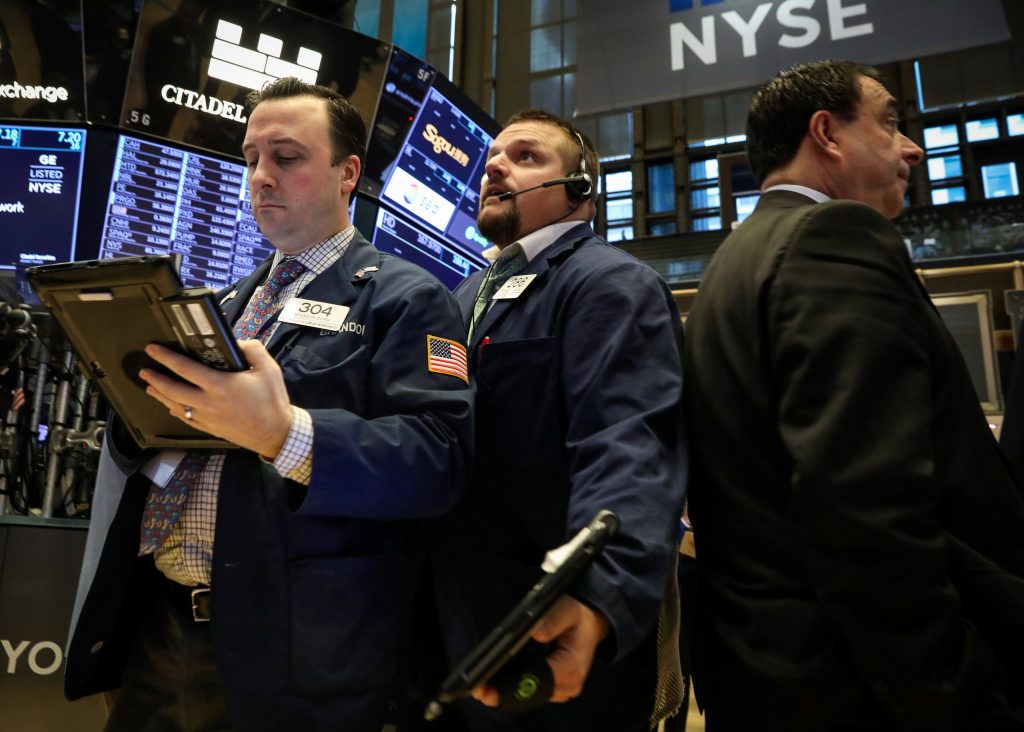 U.S. stocks are broadly higher at midday Tuesday, putting at least a temporary halt to the steep market losses that circled the globe in prior days. Asian markets sank sharply earlier in the day and European markets continued to slip. The Dow Jones Industrial Average is up about 300 points after falling 1,004 points over the past two days.

Investors are waiting to hear from the Federal Reserve, which begins a two-day meeting on interest rates. Most economists expect it to raise short-term rates by another quarter of a percentage point, but investors hope that it will signal a slower pace of increases ahead.

KEEPING SCORE: The S&P 500 index gained 24 points, or 1 percent, to 2,570 as of 12:25 p.m. Eastern time. On Monday it closed at its lowest since October 2017 amid worries about slowing economic growth, higher interest and global trade tensions.

The Russell 2000 index of smaller companies added 13 points, or 1 percent, to 1,391. The index is still 20 percent below the peak it set in August, meaning it’s in what Wall Street calls a “bear market.”

TAKING OFF: Aerospace company Boeing surged to one of the market’s biggest gains after it raised its dividend 20 percent and increased its stock buyback program by $2 billion to $20 billion. Boeing’s stock has struggled recently on worries that the global trade war will hit its profits particularly hard.

Boeing rose 4.3 percent to $329.85, which contributed to large gains for industrial stocks. The stock is down 16 percent since early October.

Several other companies that have recently suffered big losses also said they will buy back more stock. Health care products giant Johnson & Johnson said it will buy back $5 billion in shares, and it rose 2.3 percent to $132.10. It plunged 13 percent over Friday and Monday following a Reuters report that it was aware that trace amounts of carcinogenic asbestos sometimes contaminated its Baby Powder and other talc products. The company denies that report.

Insurer Allstate said it will buy back $1 billion in stock, and it gained 2.7 percent to $82.34. It’s fallen about 16 percent since the end of September.

DELUXE APARTMENT IN THE SKY: The Commerce Department said developers broke ground on more apartments in November. That made up for a decrease in construction of single-family homes. Homebuilders climbed. Lennar gained 4.1 percent to $41.66 and NVR added 2.4 percent to $2,511. The companies have taken huge losses this year as rising mortgage rates and prices have reduced home sales.

CRUDE AWAKENING: The price of oil continued to tumble and is at its lowest since September 2017. It has plunged by more than one-third as traders worried about a slowdown in the global economy and an increase in supply. Both would hurt prices. While OPEC and several other countries recently agreed to cut production of oil in 2019, it’s unclear if the cut is large enough to balance supply and demand.

On Tuesday, the Energy Information Administration said U.S. shale oil production will keep climbing in January, and the Wall Street Journal reported that oil production in Russia reached a record high in December.

MORE BREADSTICKS: Darden Restaurants, the company behind Olive Garden and LongHorn Steakhouse, jumped 5.2 percent to $104.04 after it raised its forecast for earnings this fiscal year.

It and other companies in the S&P 500 that sell non-essentials to consumers jumped a collective 1.6 percent rise for one of the market’s bigger gains.

FED MEETING: Most economists expect the Fed to raise its short-term interest rate to a range of 2.25 percent to 2.5 percent. The rate helps set borrowing costs for several types of loans, and higher rates can slow economic growth and make stocks look relatively less attractive.

Many investors hope that Fed Chairman Jerome Powell will signal a pause in rate increases at his press conference Wednesday afternoon.