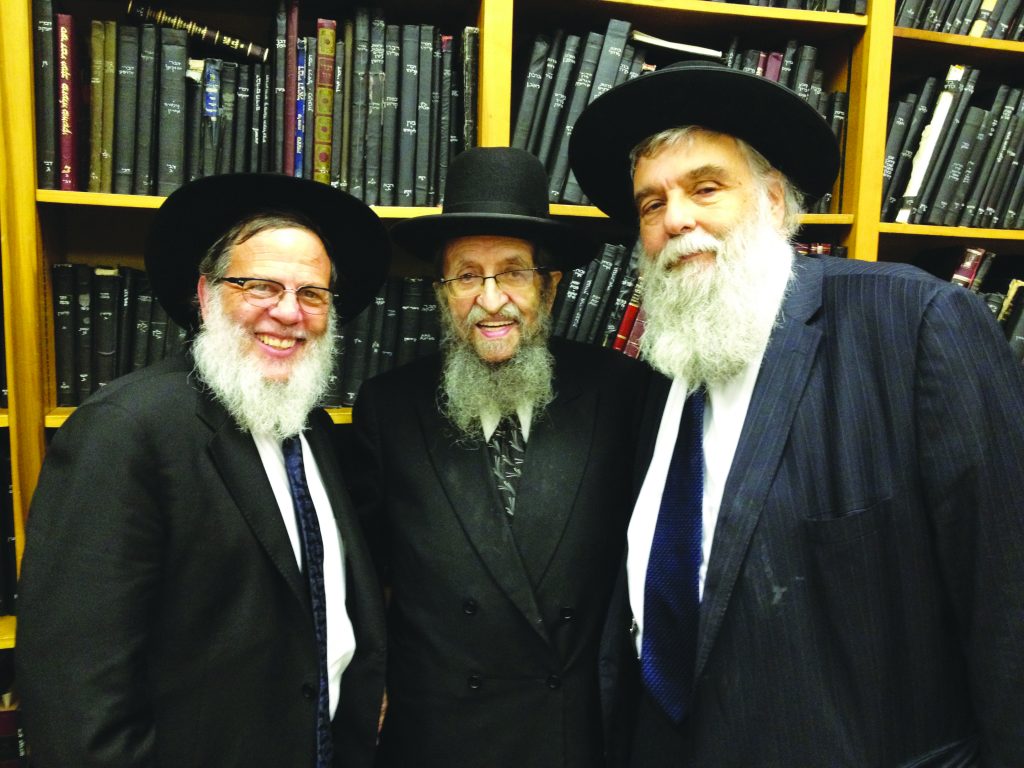 Yeshiva Toras Chaim Bais Binyamin, together with the entire Five Towns and Far Rockaway community and beyond, suffered a tremendous loss Motzoei Shabbos with the petirah of Rabbi Chanina Herzberg, Menahel of the yeshivah for nearly 40 years.

Rabbi Herzberg guided the yeshivah through many generations of talmidim, working hand in hand with the Rosh Yeshivah, Harav Binyamin Kamenetzky, zt”l, with extreme devotion and care. He always kept the talmidim foremost in his mind, and he would often repeat to the Rebbeim, “Remember, you work for the talmid! Not for the board of directors, and not for the parents!”

Growing up in the East New York section of Brooklyn, young Chanina, then known as “Charlie,” attended Yeshiva Toras Chaim of East New York. His future at the time did not seem to be in the direction of chinuch. When he was ready for high school, his Menahel, Rabbi Yitzchok Schmidman, took him to Harav Yitzchok Hutner, zt”l, with the hope that he would be accepted to Mesivta Yeshiva Rabbeinu Chaim Berlin. Rav Hutner farhered young Chanina but, as Reb Chanina admitted many times, he did not do well.

Rav Hutner asked him one final question, “Do you want to learn?”

“Well, then, you’re in!” Rav Hutner said with a smile. This encounter changed his life. He often repeated that question to boys old enough to understand that having the will to learn is the key to success in learning.

He enrolled in Yeshivas Rabbeinu Chaim Berlin, where he developed a close relationship with the Menahel, Harav Shlomo Freifeld, zt”l. When Rav Freifeld opened Yeshiva Sh’or Yoshuv in Far Rockaway, Rav Chanina was one of the original talmidim who joined him. From that moment on, he never left his Rebbi.

Just a few years ago, with only two weeks left to the school year, a boy was acting out of line. When his Rebbi reprimanded him, the boy shot back, “You’re not my Rebbi anymore anyway!” The Rebbi brought the boy to Rabbi Herzberg, who asked the talmid, “How much longer will your Rebbi be your Rebbi?”

Rabbi Herzberg paused, then banged on his desk, and looked into the talmid’s eyes before teaching him a lifelong lesson, “Your Rebbi is your Rebbi for the rest of your life!”

As a talmid muvhak of Reb Shlomo, Rabbi Herzberg did not make a move without him. Any talmid who learned in Yeshiva of South Shore (YOSS) heard many stories about Reb Shlomo. Harav Mordechai Kamenetzky, Rosh Yeshivah of YOSS, noted that there was hardly a serious conversation with Rabbi Herzberg in which he did not “shtel tzu” an idea from his Rebbi, Reb Shlomo Freifeld.

In the early years of Mesivta Ateres Yaakov, which began as the high school division of YOSS, Rabbi Herzberg would accompany the high school boys on their visits to Reb Shlomo. Despite Reb Shlomo’s illness, he would spend hours discussing hashkafah with the talmidim of the mesivta.

As a Menahel, there were many times when he had to discipline a child, yet he did it in the most loving way. He would peer at a talmid with a penetrating look, yet there was much love in that stare. Even before he gave his rebuke, the talmid understood that it came along with a genuine love.

Once, one of his children noticed that he was not himself for a few days. He was not eating and was spending a lot of time pacing the floor. After inquiring what the matter was, Rabbi Herzberg responded, “There is a boy in yeshivah who, for various reasons, had to be asked to leave. It pains me greatly, and it’s not a simple matter, but I had to do it. This week I received a phone call from a Rav berating me for my decision! Does he know that I spent three days agonizing over it? Does he know that I secured a place in another yeshivah for this boy? Does he know that I fasted on the day I asked the boy to leave?”

Rabbi Herzberg began his career teaching seventh grade in Yeshiva Tiferes Moshe in Queens. His first year was not an easy one, as the yeshiva split a class and Rabbi herzberg was assigned a group of boisterous boys who were academically on the weak side. Yet despite the challenges, he persevered and grew into an exemplary Rebbi. In fact, during the levayah, a talmid of Rabbi Herzberg from that first class in Tiferes Moshe some 40 years ago requested to say divrei hesped. He got up and spoke about how close he still feels to his Rebbi, and how he still feels hakaras hatov to him after all these years.

Rabbi Herzberg was promoted to assistant Menahel and, a few years later, Rav Binyamin Kamenetzky asked him to join Yeshiva of South Shore as Menahel. He was excited at the thought of rejoining Yeshiva of South Shore which had merged with his alma mater, Yeshiva Toras Chaim of East New York, but was a bit apprehensive, since he was younger than most of the Rebbeim in YOSS. He asked his Rebbi, who assured him that in no time he would earn their respect and admiration. The tears in the eyes of many of the older Rebbeim still in the yeshivah, as well as those who returned for the levayah, attest to that.

At home, he was an amazing father to his children. His sons all repeated that their father did not preach, but he led by example. As his son Rabbi Eli Herzberg said at the levayah, one Purim he handed him $500 and told him to distribute it to poor people in Far Rockaway. Rabbi Herzberg would also purchase hundreds of dollars of gift cards with his own money and give them to almanos before Chanukah, allowing them, in their dire financial states, to give gifts to their children.

His devotion to talmidim was amazing. He would go to every bar mitzvah, even if it meant walking to Woodmere or Hewlett from his Far Rockaway home. He once left his own son’s vort to speak at a weeknight bar mitzvah of a talmid in Brooklyn.

During the last two years, despite his progressing illness, he would come to yeshivah as often as he could. Due to his weakened state, his wife and children would try to dissuade him from going, telling him to relax and take it easy, but he would reply, “The yeshivah is my life! They need me there! The talmidim are waiting for me!”