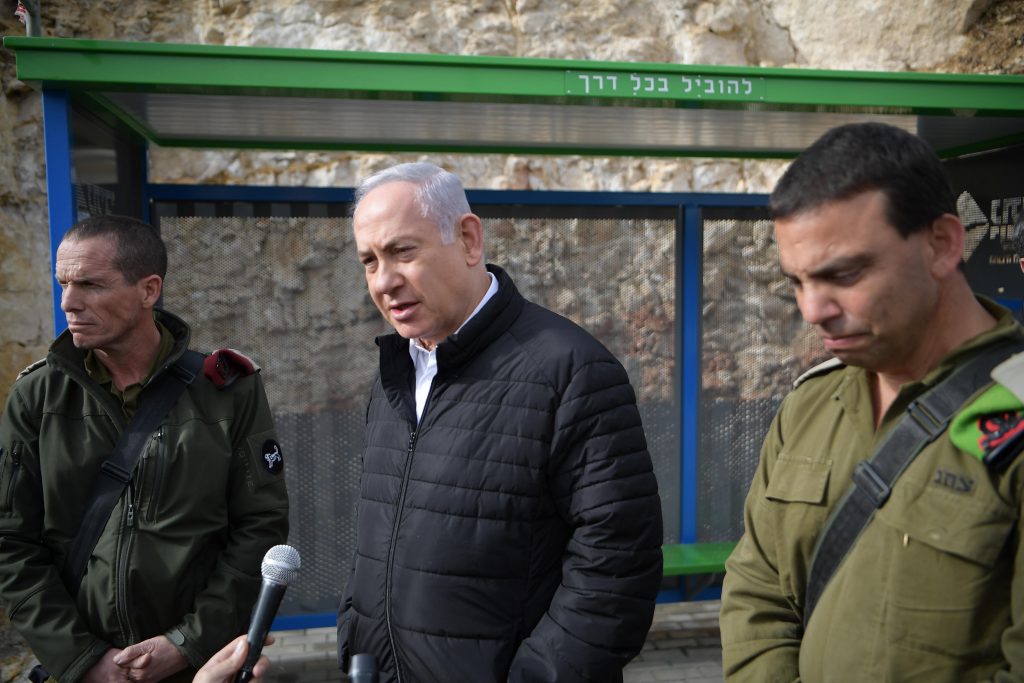 “As you have heard, the manhunt is in full force,” Netanyahu began. “Over the weekend there were 100 arrests and yesterday there were 36. It is only a matter of time until we also find this murderer, as we found the others, and we will settle accounts with him as we did with the others. Palestinian terrorism will not uproot us from here. This place is the heart of our homeland.

“I would like to commend here the public for showing resilience and steadfastness in the face of this murderous terrorism, and praise the IDF commanders and soldiers who are guarding every citizen, around the clock, seven days a week.”

The prime minister was confronted by Shai Alon, the chairman of the nearby Beit El local council, who urged him to close a northern entrance to the Palestinian village of al-Bireh, which he said had been used by terrorists to flee toward Ramallah after carrying out attacks on Route 60, the region’s main north-south artery, The Times of Israel reported.

Following the Second Intifada, the al-Bireh entrance, called Focus Block, was sealed except for official Palestinian convoys. Palestinians from Ramallah who wished to reach Route 60 had to take a roundabout route through Kafr Aqab or Birzeit.

However, two years ago, the entrance was reopened for use by all Palestinians.

On Sunday — three days after the Givat Assaf Junction attack — the entrance was reopened. Alon immediately requested that the IDF reclose it, which it did.

Alon then released a statement publicly repeating the warning he made to IDF officials: “If Focus Block is opened, we will close it with our bodies.”

Netanyahu did not immediately respond to Alon’s request on Tuesday, but promised he would look into it.