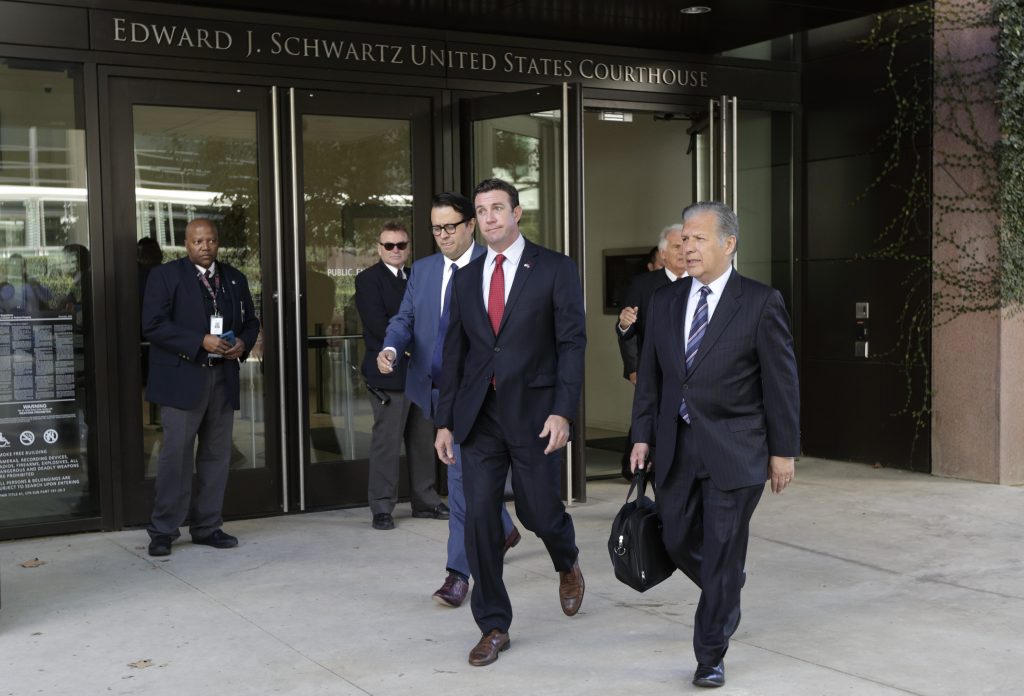 New Republican Party rules adopted last month for the incoming Congress are expected to block indicted members from committee work, sharply limiting the ability of Rep. Duncan Hunter to deliver specific benefits to his district — at least until his trial, experts say.

Hunter (R-Calif.), was re-elected to the 50th District’s seat in Congress last month despite being under federal indictment with his wife since August for their alleged theft of more than $250,000 in campaign funds.

The couple denies the charges. Hunter has said he looks forward to clearing his name at trial, which is scheduled to begin Sept. 10.

After the midterm elections, the House Republican Conference revised its internal party rules for the 116th Congress, which starts in January. The changes require any member who is indicted “for a felony for which a sentence of two or more years imprisonment may be imposed” to “promptly” submit their resignations from all committees.

Previously, there were no House or party rules that gave Republican leadership authority to strip indicted rank-and-file members of assignments to standing committees, according to the Congressional Research Service.

Political science experts said the new rules are a strong signal that party leaders do not want members who are charged with breaking the law to have a seat at lawmaking tables — especially since Republicans will become the minority party in the new Congress.

Hunter is not the only returning congressman who is under indictment. Rep. Chris Collins (R-N.Y.), was also re-elected in November despite facing criminal charges related to an alleged insider-trading scheme.

Members have yet to receive committee assignments for the 116th Congress. Hunter stepped down from his committees in the fall under pressure from Speaker Paul Ryan to do so.

Hunter spokesman Michael Harrison said the congressman is actively working to keep his committee assignments for Education and the Workforce, Armed Services and Transportation and Infrastructure. Hunter also chaired an important subcommittee on the U.S. Coast Guard and Maritime Transportation.

Hunter will still be able to introduce legislation, speak on the House floor, vote on legislation and provide constituent services even if he cannot serve on committees and subcommittees.

But while floor speeches and votes are the most visible work performed by members of Congress, historically they find their best opportunities to secure jobs, infrastructure projects or other tax dollars for their districts in committee rooms, where legislation introduced in the House is divided up by subject matter for consideration.

Committees receive far more pieces of legislation than they can work through in a two-year legislative cycle, so it’s up to committee chairs from the majority party to determine which bills are developed and moved forward.

During the process known as mark-up, the committees hash out details in spending bills and other legislation. Committees also hold hearings and give policy guidance and work to govern agencies under their jurisdiction.

As a member of the Armed Services and Transportation and Infrastructure committees, Hunter was able to steer benefits to his East County district by influencing funding bills and policies, said Charles H. Stewart III, a Massachusetts Institute of Technology political scientist who researches congressional committees.

“The largest authorization bills come through armed services,” Stewart said. “Infrastructure can also be among the largest spending bills that come through Congress.

“Those bills involve large employment contracts, large contracts in general and big projects and things people can see,” he said. “In San Diego, you can’t swing a dead cat without seeing the benefits of the Armed Services Committee.”

Optics alone could threaten the party’s reputation and the credibility of any legislation the embattled lawmakers touch, Stewart said. One reason it’s illegal for members of Congress to spend campaign contributions for personal expenses, as Hunter is accused of doing, is that it could give undue influence to donors such as defense contractors.

“It just gives ammunition in this case to Democrats and enterprising reporters,” Stewart said. “It just looks bad.”

On the House floor and in committees, Hunter and all Republicans will have a much tougher time getting legislation passed when Democrats are in the majority, said Marian Currinder, a senior fellow with the R Street Institute, a public policy think tank based in Washington, D.C.

“If Hunter were to sponsor legislation, the only way he would get anything to the floor is to be co-sponsored with a Democrat and it’s hard to imagine that being the case right now,” she said. “Especially with Democrats’ focus on campaign finance reform, ethics and good government, the idea that a Democrat is going to extend a hand to him to say, ‘Let’s co-sponsor legislation,’ seems kind of unrealistic.

“It’s going to be hard for any Republican, especially one who is under indictment,” Currinder said.

Another roadblock to Hunter’s effectiveness as a lawmaker is his reported defiance of party leadership in the days after his indictment, experts said.

When Hunter was indicted Aug. 21, Ryan released a statement calling the charges “deeply serious” and announcing that Hunter would be removed from committees until his legal troubles were resolved.

But Ryan had no specific authority to force Hunter to resign from committees at the time, and multiple news outlets reported that the Alpine congressman initially refused to step down.

Days later, facing a wave of political pressure and the threat of convening a special panel to force him off panels, Hunter requested that he be temporarily removed from his assignments.

Harrison, the spokesman for Hunter’s office, said the congressman does not believe his legal woes have impacted his professional relationship with colleagues or that it will limit his ability to pursue legislation in the coming Congress.

“He believes that he will be acquitted and that he has a good case to make and he has been very upfront with any of his colleagues or constituents that ask about the situation,” Harrison said. “He doesn’t believe it will impact his ability to serve in anyway.”

Hunter was among the first members of Congress to endorse Donald Trump’s successful candidacy for president and remains a steadfast supporter of Trump’s political agenda. He voted in step with Trump 94.6 percent of the time since January 2017, according to FiveThirtyEight, a political analysis website.

Hunter and his wife face a 60-count indictment for alleged fraud and misuse of campaign funds for personal expenses such as groceries, family vacations and private school tuition.

If Hunter is convicted, there is no explicit law or rule that would require him to leave the House, legal scholars have said. Even if he receives a prison sentence, House rules recommend but do not necessarily require that he step down from committees or refrain from voting.

If Hunter ultimately resigns or is removed from office, it would likely trigger a special election to fill the seat.