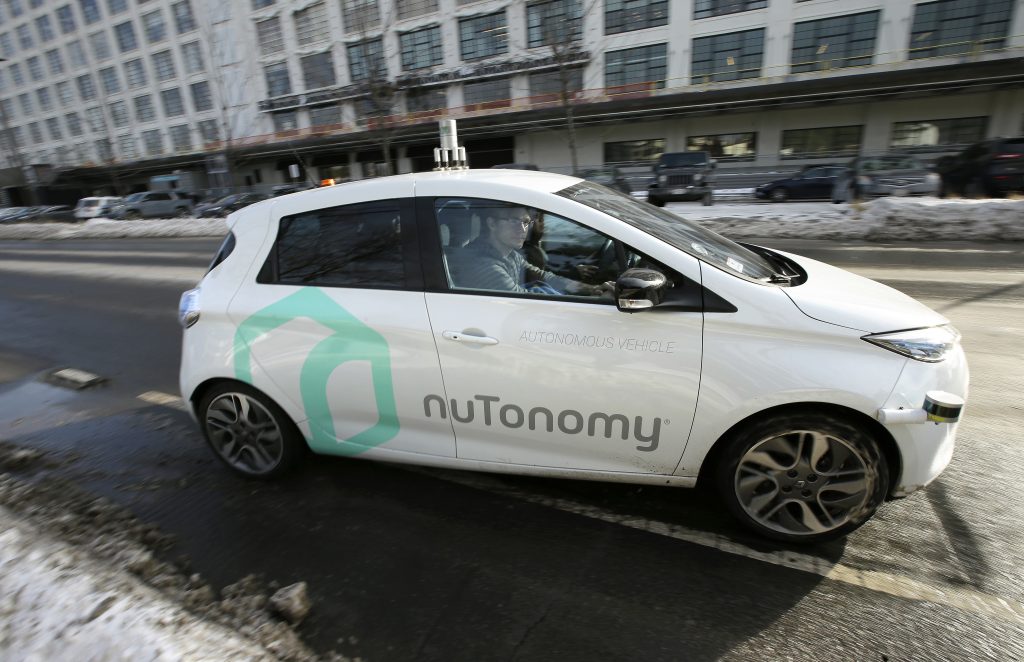 Sen. John Thune was test-driving a car of the future when he ran into a very 20th century problem: traffic.

In 2016, Washington’s local laws forced Thune’s autonomous-capable Chrysler sedan to motor into neighboring Virginia before it could show off the no-hands navigation. That’s where the South Dakota Republican got stuck in a tide of commuters.

“Evidently driverless cars are not going to help our traffic jams,” he said. Thune was an early advocate for autonomous vehicles, but his experience among a fleet giving Congress test rides that day is a good example of why Capitol Hill needs to set uniform standards for driverless cars before the technology becomes more widespread, he said.

Two years later, Thune and other lawmakers are working to address the patchwork of state regulations that could hamper the commercial introduction of driverless transport and make it difficult for them to ferry passengers over state borders.

The bipartisan bill, called the AV START Act and co-sponsored by Michigan Democrat Gary Peters, has been the subject of a flurry of recent negotiations among lawmakers and outside groups hoping for a vote on the Senate floor.

But with just weeks to go before the end of the Congress, Senate lawmakers and their staffs are racing to address lingering concerns — including safety questions raised after two fatal crashes involving autonomous vehicles earlier this year.

“I would say at this point it’s a long shot,” Thune said last week. “Every time we whack a mole, another one pops up.”

Manufacturers predict they will introduce the first driverless cars to the commercial market in the next several years, an event that could have reverberating and transformative effects on everything from the way American cities are designed to the mobility of the elderly and disabled.

The bill would start the process of creating uniform federal safety and design standards, which could take up to 10 years.

In the meantime, it attempts to set interim safety standards and clear regulatory hurdles, such as rules written with the assumption that a motor vehicle would have a human driver and equipment such as a steering wheel or a brake pedal.

The goal is to create short-term rules that will help get vehicles on the road in as many environments as possible, allowing manufacturers to collect the data they need to improve the technology.

The bill passed the Senate Commerce, Science and Transportation Committee by a voice vote in October, and a companion bill sailed through the House last year. But progress stalled until early this month, when the Senate committee produced a draft that attempted to pave the way for a floor vote.

Staff members on both sides of the aisle said part of the issue is so many different industries and interest groups have a stake in the outcome.

Opponents include a group of Democratic senators led by Dianne Feinstein of California, who wrote in a March letter that they were concerned the bill would overrule state safety laws without ensuring new federal regulations would take their place. The latest draft did not address all of Feinstein’s concerns, she said last week.

“We still need stronger protections for state and local traffic safety laws and a firm timetable for setting federal safety standards,” she said.

Another last-minute objection came from the American Association for Justice. The group represents trial lawyers and wants to ensure people injured by autonomous vehicles will be able to file legal claims under existing state laws and not be forced into arbitration.

“We believe several of the new sections added will negatively impact consumer, passenger and roadway user rights if enacted,” read a statement the organization sent to the Senate this month.

The hope is automated vehicles could save thousands of lives a year. The National Highway Traffic Safety Administration estimates that 37,000 people died in motor vehicle crashes in 2016, and as many as 94 percent of crashes are attributed to human driver error.

There is general recognition that the federal government will eventually need to set national standards for this new industry, just like aviation or nonautonomous vehicles.

The question is how quickly Congress should act.

With manufacturers across the country already pouring billions of dollars into testing and developing the technology, advocates say failing to pass legislation could hamper innovation and put the United States at a competitive disadvantage.

“If you are trying to create a car with 50 different safety standards, that’s a real bottleneck in terms of when it can come to the marketplace, and testing and development,” said Scott Hall, a spokesman for the Alliance of Automobile Manufacturers, a strong supporter of the bill.

New York laws, for example, require operators to keep their hands on the wheel at all times — a stipulation that would become tricky in a car without a steering wheel. California requires autonomous vehicles to contain a different type of event data recorder than other states, a black box-type device that can be used to retrieve information after a crash. And until recently, Utah required passengers in autonomous vehicles to switch license plates at the state’s border.

Fifteen states have enacted laws governing self-driving vehicles this year, and dozens of bills are currently under consideration in state legislatures, according to the Senate Commerce Committee’s report on the bill.

Guidance from the National Highway Transportation and Safety Administration issued in 2017 and from the Department of Transportation in October provided voluntary safety guidelines for manufacturers.

In the meantime, companies continue to announce new projects to test the technology on public roads, especially in states with less restrictive rules. That includes Washington, D.C., which has relaxed its restrictions since Thune’s traffic jam. Ford Autonomous Vehicles announced it would begin road-testing self-driving vehicles in the district starting in 2019, a project designed in part to attract the attention of lawmakers and their staffs. It plans to launch a self-driving taxi and delivery service in the district in 2021.

Critics point to such projects as proof there is nothing in current laws to stop manufacturers from conducting research. But they say creating new regulations too soon could backfire.

“There is an artificial urgency to rush this bill through so that autonomous vehicle manufacturers can start selling” the technology, said Cathy Chase, president of Advocates for Highway and Auto Safety, which represents consumer, medical, public health, safety groups and insurance companies. “They are not ready for prime time. Our concern is that there will be even more of these driverless cars on the road, to the detriment of public safety.”

Experts say that even if the bill does not pass this Congress, lawmakers will have other chances to get it right.

There is no need for a national law until the vehicles are commercially deployed, said Paul Lewis, vice president of policy and finance at the Eno Center for Transportation, a D.C. think tank that focuses on the transportation industry. But that time is coming, putting lawmakers in a unique position to act, he said.

“Here we have an opportunity to see the future.”