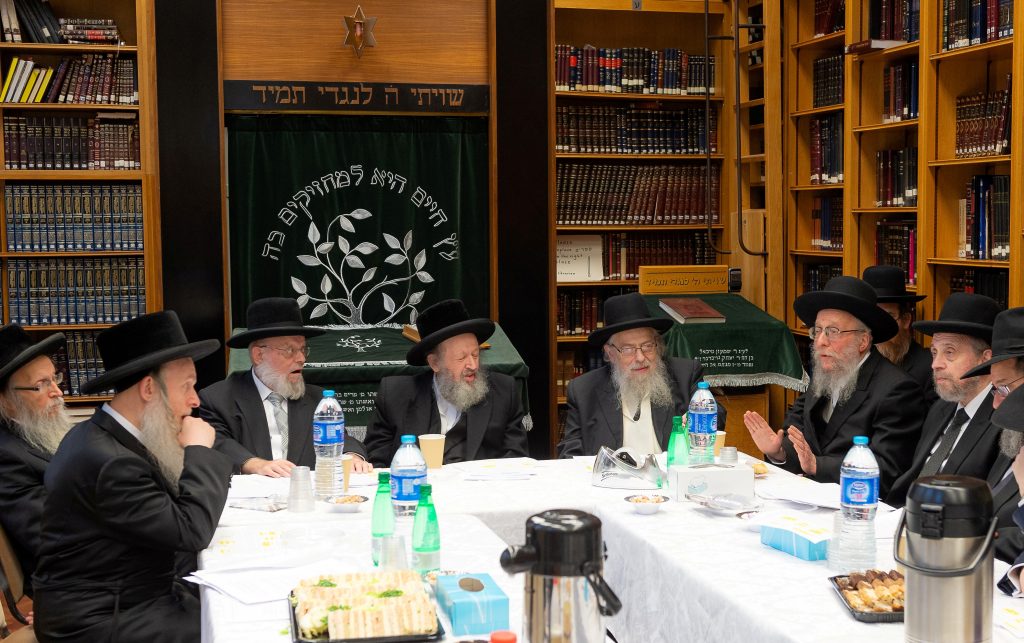 The Council of Rabbonim of Chinuch UK (CUK) convened in London last week to review the position of mosdos haTorah under U.K. government jurisdiction.

The meeting was held at Golders Green Beth Hamedrash in London, and brought together the Vaad’s nine Rabbanim from across the country, representing each of the U.K.’s chareidi kehillos.

Together, the Rabbanim considered the collective communal response to the challenges arising from government education policy. After many hours of deliberation, the Rabbanim gave direction to the askanim of Chinuch UK about how to approach discussions with government, and to schools about how to respond when regulations clash with the ethos of chareidi mosdos.

The meeting commenced with opening words from the Gaavad Harav Efraim Padwa of London. Rav Padwa put the meeting into historic perspective, recalling that in previous generations whenever Klal Yisrael was in a tzarah, Rabbanim and askanim came together to represent the klal and intercede with the government on their behalf.

Rav Padwa gave a lengthy brachah for success with CUK’s mission and, on the day after Chanukah, added a message that, come what may, ehrliche Yidden will not give way even minimally when pressured to depart from our mesorah, as in the times of the Yevanim. This position was unanimously adopted by the Rabbanim, who were also clear that schools may not give the impression upon inspection that they teach in contradiction to our mesorah, in order to satisfy regulations.

The Rabbanim were briefed in detail with an up-to-date analysis of the issues, including how Chinuch UK has engaged with the different parts of government bodies that interface with education policy. The message has now been conveyed across government that the chareidi community is comprised of responsible and law-abiding British citizens. They are parents, who after years of peaceful existence in Britain have now found their freedom to practice their religion, and to raise the next generation of Klal Yisrael, fundamentally challenged.

There is a very high awareness within the government, from the Prime Minister’s Office down to local education authorities, of the seriousness of the issue, and the askanim firmly believe the government desire to deal with it, iy”H.

Notwithstanding the deep-rooted and persistent policy problems for mosdos haTorah, the Rabbanim also heard that on the ground the situation appears to be easing somewhat. Fewer schools are being graded as ‘inadequate,’ and more schools are getting better grades. Restrictions and penalties on schools have been lifted. The experience of inspections is reportedly improving. Notably, in her recently released annual report, the Chief Inspector of Schools, Ms. Amanda Spielman, struck a conciliatory note, identifying one of her priorities for the year ahead to be focusing on “what it can look like when schools with a declared faith successfully navigate potential conflicts between equality legislation and how they teach their beliefs and express them in their ethos and practices.”

This is an unusually positive message from Ms. Spielman, who in the past has made thinly veiled references to chareidi schools that ‘isolate their children’ and expressed determination to bring them into line with modern Britain.

As well as considering CUK’s approach to negotiating with government, the Rabbanim considered an extensive list of she’eilos that mosdos have encountered. Based on the directives of Rabbanim, CUK will issue guidance on a range of issues to CUK menahalim and schools.