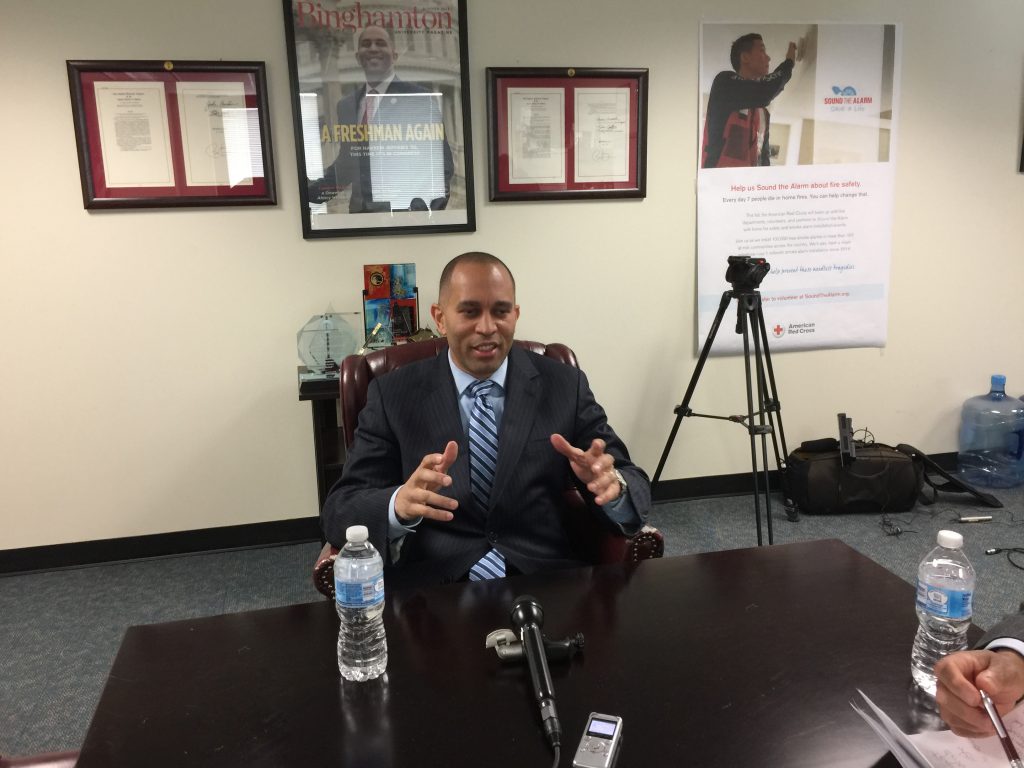 House Democrats will have to include both its progressives and centrists in a “big tent” to govern with its new majority in the 116th Congress, according to the new chair of the House Democratic Caucus.

Rep. Hakeem Jeffries (D-N.Y.), who represents portions of Brooklyn and Queens, said that with the election of some far-left candidates there is a “misconception that the most recent election represented the emergence of just one particular bloc of Democrats in the House of Representatives, when the reality is that the majority of … candidates who defeated Republicans in Trump-leaning districts are more centrist and moderate.”

Speaking Monday to local media in his Brooklyn office about Democratic efforts at “principled resistance” in the 115th Congress and attempts to pass a legislative agenda in the upcoming 116th, the man who will serve as the fifth-highest-ranking Democrat said that it is these new, centrist Democrats that gave the party its new House majority.

“The most important thing that I can do [as chair of the caucus] is to allow for a meaningful huddle to take place each and every week where Democrats across the ideological spectrum can come together, hash out issues and then figure out what plays we’re going to execute on behalf of the American people.”

Among the highest Democratic priorities is health care.

“The most important principle that Democrats can rally around is the notion that the American people deserve universal access to high-quality, affordable health care,” said Jeffries.

In the past, Jeffries has supported “Medicare for all” proposals for single-payer health care. On Monday he struck a more cautious tone, saying that there can be a debate over the precise way to implement the ideal of what he calls “universiality of coverage,” but he’d like to begin by protecting and strengthening the Affordable Care Act, which Republicans have repeatedly tried to overturn or weaken since its 2010 passage.

Though there may be an impending clash between Democrats who will push for Medicare for all and those who take a less aggressive approach, Jeffries believes that “nothing unites House Democrats like having Donald Trump on the other side, and as a result of that, we’ll figure out a way to come together.”

Jeffries, who serves on the House Judiciary Committee, sponsored the FIRST STEP Act, a bipartisan prison-reform bill that President Trump has expressed support for, and is expected to pass Congress this week. Some progressives oppose the bill because — in order to garner Republican support — it mostly deals with allowing prisoners to reduce their sentences via prison-based rehab programs, and includes only limited reforms to sentencing laws. But Jeffries said it was “always our view that it would take more than a single legislative magic wand to unravel” what he calls the “mass incarceration epidemic.”

“In order to meaningfully address overcriminalization in America, we needed a strong first step, and that’s what the criminal-justice-reform bill … represents.”

The bill may be significant for another reason, Jeffries believes, by providing a template for bipartisan legislation.

“If we can do meaningful criminal justice reform by bringing Democrats and Republicans … together, in partnership with the Trump administration, it seems to me that we can tackle almost any problem confronting the American people.”

Asked whether he would support expanding religious freedoms to protect owners of private businesses who refuse to provide goods or services for events that violate their religious beliefs, Jeffries declined to state a position before his caucus holds a discussion on the topic.

Noting that he is both a civil libertarian and a churchgoer, and one who represents a diverse constituency, Jeffries described the First Amendment’s Establishment and Free Exercise Clauses as “intersecting but perhaps competing … As society changes we have to continue to make sure that we strike the right balance moving forward.”

“As someone who will be serving as the fifth-highest-ranking Democrat in the new House, it will be irresponsible for me to jump out ahead of the caucus without allowing for a robust discussion on the different perspectives, on something that would be so meaningful from a legislative standpoint.”

Turning to local issues, Jeffries said that a federal infrastructure bill should include funds to fix the MTA.

“There are crumbling bridges, roads and tunnels throughout this country, and there’s a crumbling mass transportation system in New York City. A real infrastructure plan is win-win for everyone, because it will benefit inner-city New York as well as suburban communities and rural America. Because everyone is suffering in different ways.”

House Democrats also insist that any infrastructure bill include $70 billion to repair and modernize public housing developments and revitalize communities around these developments. The largest beneficiary of such a program would likely be the scandal-plagued New York City Housing Authority, noted Jeffries, whose district includes some of the highest numbers of public-housing residents in the country.

Affordable housing is the “most significant issue” for his constituents, said Jeffries. “We need an all-hands-on-deck approach that will involve additional engagement at the federal level, including by reforming the low income housing tax credit program in a way that incentivizes the creation of more affordable housing in high-cost cities like New York — as well as reviving Section 202 of the [HUD] senior housing program, because there are many seniors throughout the 8th congressional district and beyond that are struggling to afford to live in the communities that they helped to revive.”

Jeffries slammed Trump for his stances on immigration, and said he hopes the House will pass immigration reform “starting with providing a pathway toward citizenship for the Dreamers of this country, that are American in every aspect of their life with the exception of the citizenship papers that we will work to make sure they will soon hold.”

Finally, many believe that House Democrats, with the ability, as majority party, to issue subpoenas, will be eager to hold hearings on possible improper behavior by the Trump campaign and/or administration. But Jeffries said he believes special counsel Robert Mueller and the Justice Department should be allowed “to complete their work, present their findings to the American people and to Congress, and then we can decide where to go from there.”