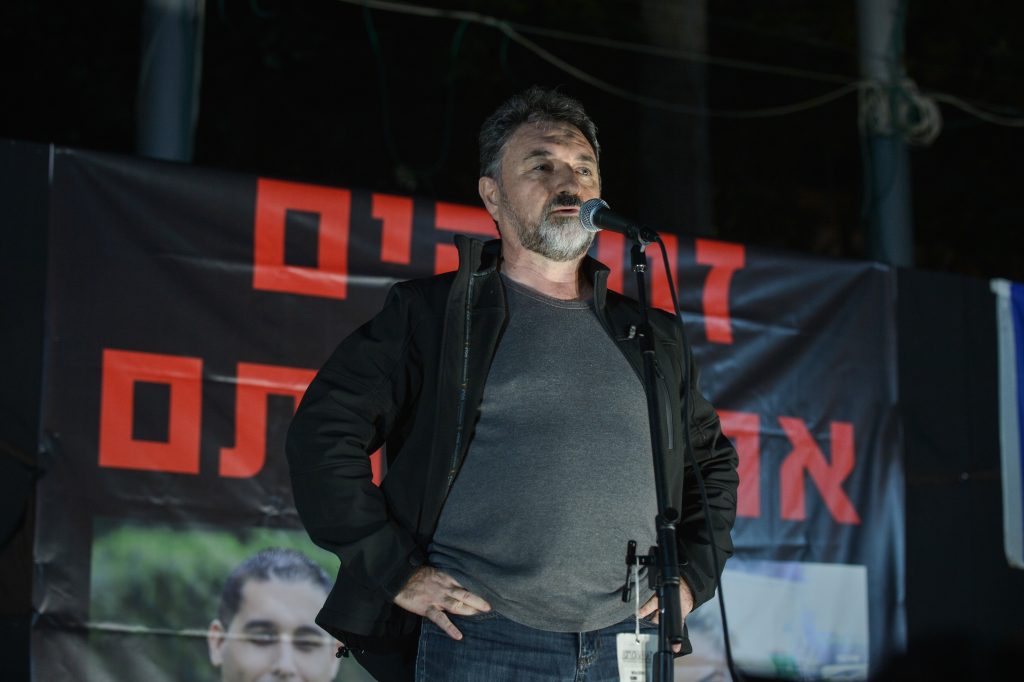 Mayors of communities in Yehudah and Shomron will protest in front of the Knesset, following up on a mass demonstration in Tel Aviv’s Rabin Square Motzoei Shabbos. In both protests, residents and community heads demanded that the IDF step up its efforts to prevent terrorism, including limiting access by Arabs to main roads in the region.

Local authorities and municipalities in Yehuda and Shomron will be on strike Sunday. Binyamin Regional Council head Yisrael Gantz said that the strike “is a wake-up call to the government. Our workers cannot get their jobs done when in recent days their main activity is planning funerals and sending out social workers to deal with the trauma felt by many over their precarious safety situation. I call on the government and ministers to stem terror, restore targeted killings of terror leaders, restore the roadblocks around Arab towns, and prevent Palestinians from having free access to roads.”

Featured speakers at the protest included members of families of victims of recent terror attacks, among them members of the families of Ziv Hajabi, Hy”d, and Kim Levengard Yechezkel, Hy”d, victims of the October terror attack in the Barkan industrial zone. Ashraf Nalaweh, the terrorist who perpetrated the attack and had successfully eluded Israeli forces for nine weeks, was finally tracked down and eliminated Wednesday night.

Iris Hajabi, the mother of Ziv, called on Binyamin Netanyahu to act in his capacity as defense minister and “give your backing to the death penalty for terrorists, to demolish their homes, to exile their families, and to deny them money. We cannot have a situation where we will be insecure and the terrorists will laugh at us. Just today the IDF demolished the home of the ,murderer of Ronen Lobarsky, Hy”d, and PA chief Mahmoud Abbas is already calling for it to be rebuilt. There is no deterrence here.”

Vladmir Lubarsky, the father of Ronen, said that the demolition of the home of the family of Islam Abu-Hamid, the murderer of his son, was a “small comfort, but I see it as the beginning of a new path. I urge the prime minister – stop acting in a defensive manner. We must attack them. They see our weakness and they are not deterred. The terrorist who carried out the attack in Beit El turned himself in Motzoei Shabbos, and that was due to the activities of the IDF in recent days. We must remove the gloves when fighting terror.”