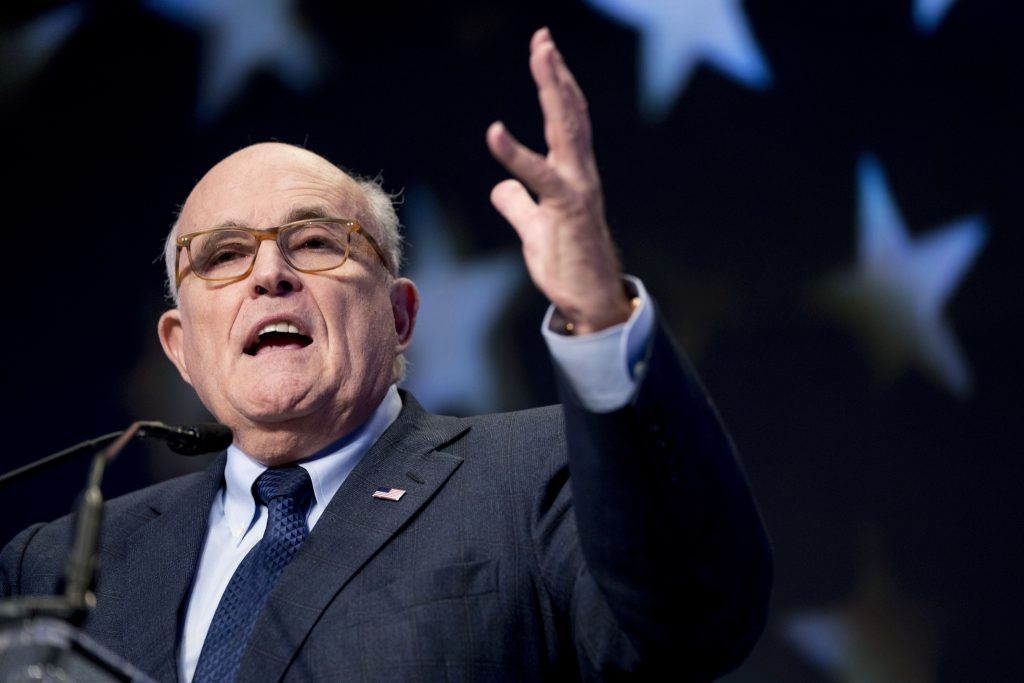 With a number of probes moving closer to the Oval Office, President Donald Trump and his attorney unleased a fresh series of attacks Sunday on the investigators, questioning their integrity while categorically ruling out the possibility of a presidential interview with the special counsel.

President Trump and Rudy Giuliani used Twitter and media interviews to deliver a series of broadsides against special counsel Robert Mueller and federal prosecutors in New York. Giuliani said he was “disgusted” by the tactics used by Mueller in his probe into Russian election interference, including in securing guilty pleas from the president’s former national security adviser Michael Flynn on a charge of lying to federal investigators.

Trump, Giuliani said, would not submit to an interview by Mueller’s team.

“They’re a joke,” Giuliani told Fox News. ”Over my dead body, but, you know, I could be dead.”

Giuliani sarcastically said that the only thing left to ask the president was about “several unpaid parking tickets that night, back in 1986, ’87 that haven’t been explained.”

The special counsel’s investigation has spun out charges and strong-armed guilty pleas from Trump underlings while keeping in suspense whether the president — “Individual-1,” in Mueller’s coded legalese — will end up accused of criminal behavior himself. This past week, his legal exposure grew as his former personal attorney, Michael Cohen, was sentenced to three years in prison after admitting he issued hush-money payments. Prosecutors and Cohen say he acted at the president’s direction, which Trump and Giuliani deny.

Trump and Giuliani have repeatedly tried to paint Cohen as untrustworthy, with the former New York City mayor calling him a “pathological liar.”

Trump and Giuliani have also accused prosecutors of intimidating the president’s associates into making false claims.

“Remember, Michael Cohen only became a ‘Rat’ after the FBI did something which was absolutely unthinkable & unheard of until the Witch Hunt was illegally started,” President Trump tweeted. “They BROKE INTO AN ATTORNEY’S OFFICE!”

The FBI had executed a search warrant obtained from a judge in conducting a raid in April on Cohen’s home, office and hotel room and seizing records on a variety of matters, among them a $130,000 hush-money payment. The application for the warrant was approved high in the Justice Department.

In response to Trump’s tweet, former FBI Director James Comey tweeted, “This is from the President of our country, lying about the lawful execution of a search warrant issued by a federal judge. Shame on Republicans who don’t speak up at this moment — for the FBI, the rule of law, and the truth.”

Prosecutors have said Trump directed Cohen to arrange the payments to buy the silence of people with potentially damaging information, in the run-up to the 2016 campaign. Federal prosecutors in New York say the payments amounted to illegal campaign contributions because they were made at the height of election season.

The hush money wasn’t initially reported on campaign finance documents and, in any case, far exceeded the legally acceptable amount for in-kind contributions. The federal limit on individual contributions is $2,700.

Rep. Elijah Cummings, the top Democrat on the House oversight committee and the likely chairman come January, said he wanted Cohen to testify before Congress about what he told prosecutors. Meanwhile, President Trump’s fellow Republican, Sen. Susan Collins of Maine, acknowledged on CNN that “it was not a good week for President Trump” and urged “that the special counsel be allowed to complete his investigation unimpeded.”

Trump compared his situation to one involving President Barack Obama’s 2008 campaign. The Federal Election Commission, which typically handles smaller campaign finance violations when the actions aren’t willful and with civil penalties that are typically fines, docked the Obama campaign $375,000 for regulatory civil violations. The fines stemmed from the campaign’s failure to report a batch of contributions, totaling nearly $1.9 million, on time in the final days of the campaign.

But legal analysts said the accusations against Trump could amount to a felony because they revolve around an alleged conspiracy to conceal payments from campaign contribution reports — and from voters. It’s unclear what federal prosecutors in New York will decide to do if they conclude that there is evidence that Trump himself committed a crime.

President Trump has not yet laid out a detailed defense, though he could conceivably argue that the payments were made not for the purposes of advancing his campaign but rather to prevent stories from emerging that would be personally humiliating to him.

That argument was advanced by former Sen. John Edwards, a North Carolina Democrat, in a similar campaign finance case that went to trial. But that may be tougher for Trump than it was for Edwards given the proximity of the president’s payment to the election — timing that, on its face, suggests a link between the money and his political ambitions.

Still, the cases aren’t always easy, as proved by the 2012 trial of Edwards. Jurors acquitted Edwards on one charge of accepting illegal campaign contributions but couldn’t reach a verdict on the five remaining counts, including conspiracy and making false statements. Prosecutors elected not to retry Edwards, the 2004 Democratic vice presidential nominee.