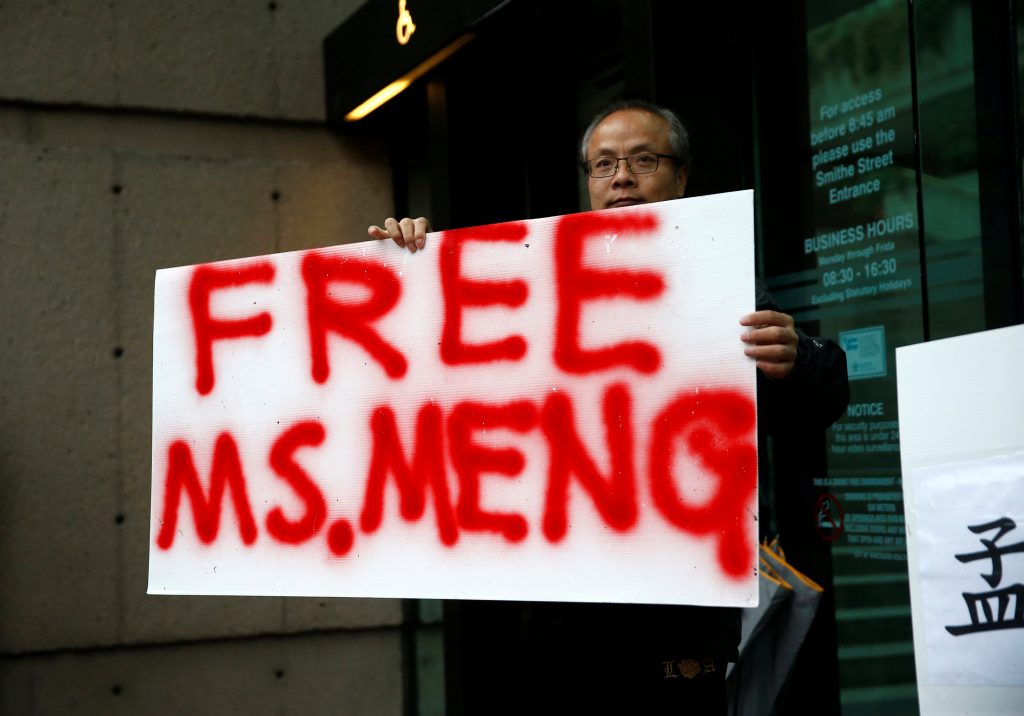 The United States and China have taken pains this week to emphasize that their trade talks are entirely separate from the U.S. case against a top Chinese technology executive. But in the space of a few words, President Donald Trump obliterated the distinction.

Trump said Tuesday he’d wade into the case against Meng Wanzhou, the chief financial officer of telecommunications giant Huawei, if it would help produce a trade agreement with China.

“If I think it’s good for what will be certainly the largest trade deal ever made — which is a very important thing — what’s good for national security. I would certainly intervene if I thought it was necessary,” Trump told Reuters in an interview.

The comment suggests Meng could be a political pawn in negotiations and makes things more awkward for Canada, which arrested her on America’s behalf during a Dec. 1 layover at the Vancouver airport.

Responding to Trump’s comment, Canadian Prime Minister Justin Trudeau said Wednesday: “Regardless of what goes on in other countries, Canada is, and will always remain, a country of the rule of law.”

“Are we now saying, ‘You violated U.S. law but if you’re willing to buy more U.S. soybeans, we can look the other way?'” asked Wendy Cutler, a former U.S. trade negotiator who is now vice president at the Asia Society Policy Institute.

A Canadian court on Tuesday released Meng on bail, confining her to Vancouver and its suburbs while she awaits possible extradition to the United States. The U.S. accuses Huawei, the biggest global supplier of network gear for phone and internet companies, of using a Hong Kong shell company to do business with Iran in violation of U.S. sanctions.

In what appears to be retaliation against Canada for arresting Meng, Chinese authorities on Monday detained former Canadian diplomat Michael Kovrig in Beijing.

“Trump’s comments were very unfortunate and probably did not reflect a great deal of thought,” said Roland Paris, a former foreign policy adviser to Trudeau. “We have a judicial process under way and it will take its course. … Canada is paying a significant price for doing the right thing by upholding the rule of law and discharging its treaty obligations. President Trump should be aware of that.”

Meng’s arrest came the same day that Trump and Chinese President Xi Jinping agreed over dinner in Buenos Aires to a 90-day ceasefire in a trade war that has shaken global financial markets and raised worries about the impact on the world economy.

The truce was meant to buy time for more substantive talks over U.S. allegations that China steals U.S. technology and forces American companies to hand over trade secrets in exchange for access to the Chinese market.

U.S. officials have insisted the sanctions case against Meng had nothing to do with the ongoing trade talks. Top White House economic adviser Larry Kudlow told Fox News that “there’s a trade lane … and there is the law enforcement lane. They are different.”

Still, there is precedent for Trump intervening on behalf of a Chinese company accused of violating U.S. sanctions.

Trump drew fire from Capitol Hill in June when he reached a deal that spared another Chinese telecommunications company, ZTE, from U.S. sanctions that probably would have put it out of business after it was accused of selling equipment to Iran and North Korea. U.S. regulators planned to bar it from receiving U.S. components that it depended on, effectively a corporate death sentence.

But Trump issued a reprieve, perhaps partly because U.S. tech companies, major suppliers to ZTE, would also have been scorched. ZTE agreed to pay a $1 billion fine, change its board and management, and let American regulators monitor its operations.

Speaking outside the White House Wednesday, Commerce Secretary Wilbur Ross urged reporters not to jump to the conclusion that Trump will actually intervene in Meng’s case.

Philip Levy, senior fellow at the Chicago Council on Global Affairs and an economic adviser in President George W. Bush’s White House, noted that “there’s a real value to keeping these things separate.”

“Do we want China to seize an (American) executive when they want to get a concession on trade talks in the future?” he asked.