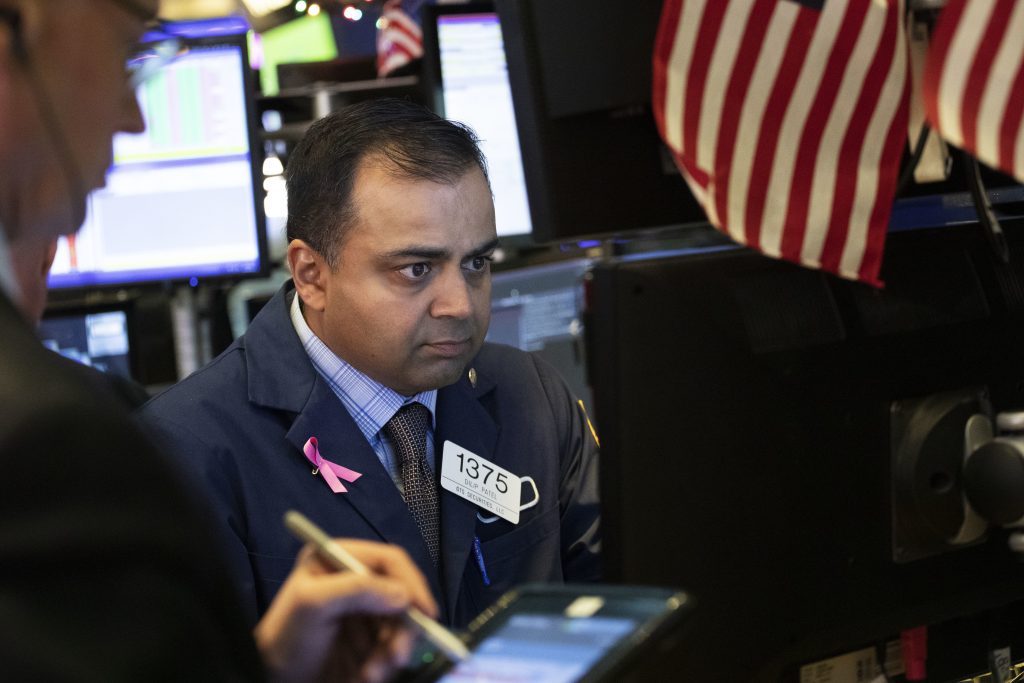 Stocks around the world are falling Monday, and U.S. indexes are mostly lower after flirting with sharp losses. Energy and financial companies are faring the worst.

The benchmark S&P 500 is on track for its fourth loss in a row, and the Dow Jones Industrial Average lost as much as 507 points before recovering somewhat.

The British pound is dropping to its lowest level in more 18 months after the U.K. prime minister postponed a vote on its departure from the European Union, and oil has resumed its sharp slide.

U.S. indexes have been lurching up and down since October, mostly down, and the S&P 500 plunged 4.6 percent last week for its biggest loss in more than eight months, as investors felt the U.S. and China are still nowhere close to ending their trade dispute.

Volatility has been high not only week to week but also minute to minute. The S&P 500 zoomed from a gain of 0.2 percent to a loss of 1.8 percent Monday morning before reversing course again.

BREXIT PAUSE: British Prime Minister Theresa May postponed a vote on her deal for Britain to exit the European Union, which had been scheduled for Tuesday. She acknowledged that she would have lost the vote by a significant margin.

The pound sank to $1.2569, down from $1.2751 late Friday. The FTSE 100 stock index fell 0.8 percent. Other European indexes fared worse, but the falling pound helped British exporters.

It’s a resumption of the steep decline for crude’s price that began in October. Last week, crude steadied after OPEC and other major oil producers said they will reduce production by 1.2 million barrels a day starting from January. The cuts will last for six months.

Asian stocks were hurt by weak economic data from Japan and China. Revised data showed the Japanese economy shrank by 2.5 percent in the third quarter, a larger decline than analysts expected. Chinese imports and exports climbed at a much slower pace in November than they had in October.

BONDS: The yield on the 10-year Treasury note wobbled and turned higher. It rose to 2.86 percent from 2.85 percent late Friday. After spiking above 3.20 percent in early November, the 10-year yield is trading around at its lowest since late August.

HUAWEI ARREST: China raised the pressure over the weekend on the United States and Canada following the detention of Huawei Chief Financial Officer Meng Wanzhou. She is suspected of trying to evade U.S. trade curbs on Iran, and she was detained while changing planes in Canada.

China summoned both the U.S. and Canadian ambassadors to meetings over the weekend, where it protested the detention and called it “extremely egregious.”

Meng’s arrest has jolted the stock market, and investors fear it is adding to the tensions between the world’s two largest economies.

BAD REVIEWS: One of Yelp’s biggest shareholders said it wants online reviews company Yelp to add new directors to its board. SQN Investors said the board hasn’t held itself responsible for strategic mistakes and weak quarterly reports, and should add representatives for shareholders.