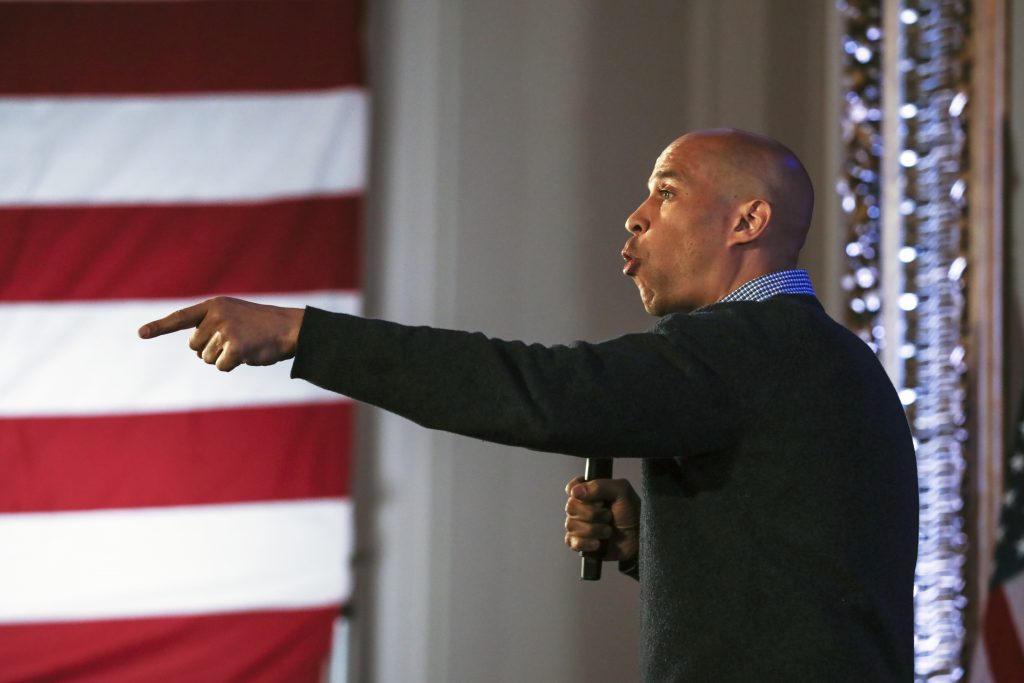 Sen. Cory Booker, returning to the first-in-the-nation primary state Saturday for a two-day trip that could turn out to be a tuneup for the New Jersey Democrat’s potential presidential campaign, said the visit leaves him “a lot more confident in making decisions going forward.”

Booker headlined the New Hampshire Democratic Party’s post-midterm victory celebration in Manchester. The event at the New Hampshire Institute of Art was jam-packed, with fire marshals directing latecomers to a separate overflow room.

Booker, who headlined two rallies in the state a week before the midterm election and who contributed more money to the New Hampshire Democratic Party and various candidates than any other potential White House hopeful during the 2018 cycle, was described by state party chairman Ray Buckley as a “best friend” to New Hampshire Democrats.

Booker didn’t discuss any 2020 ambitions in his speech, which some in the crowd described as a sermon.

He spotlighted the importance of love and emphasized that “this country has enough hate, enough bigotry, enough anti-Semitism. What we need now are courageous actors who call to the conscience of our country. A higher moral imagination, who call for a revival of civic grace.”

The likely presidential contender was also the main attraction at a gathering with activists in Nashua, at the home of longtime former state Sen. Bette Lasky. He’ll also be the guest of honor at house gatherings in Concord on Saturday night and Sunday in Keene.

Booker, who’s said in recent weeks that he’ll take the end of year season to assess whether to run for the White House in 2020, told The Associated Press that the trip is “really helpful to me in understanding what a potential presidential campaign would be about.”

He added that coming to New Hampshire makes “me feel a lot more centered, a lot more grounded, and a lot more confident in making decisions going forward.”

Booker said he had “no specific timeline” to make a presidential campaign announcement. He said he first wants to get through the lame duck congressional session, in which he’s one of the leaders trying to pass bipartisan justice reform legislation.

After that, he said, “I really need to sit down, take a deep breath, and really focus on my sense of purpose.”

Booker spoke with the AP at the Riverwalk Café in Nashua, his first stop in New Hampshire this weekend. He huddled for nearly an hour with two top local Democrats — longtime Mayor Jim Donchess and state Sen.-elect Cindy Rosenwald.

“I was impressed by how much he knew about New Hampshire, some of our situations like our mental health crisis, the drug crisis. As a former mayor, he really understands these issues,” Rosenwald said.

Also accompanying Booker at the café and throughout the weekend is Jim Demers, a leading New Hampshire-based Democratic strategist who’s backing the senator if he runs and who helped plan the trip’s itinerary. Demers was co-chair of then-Sen. Barack Obama’s 2008 campaign in New Hampshire, guiding the future president through the state.

Booker also mingled with the breakfast crowd at the cafe, speaking with customers at every table and taking selfies with patrons.