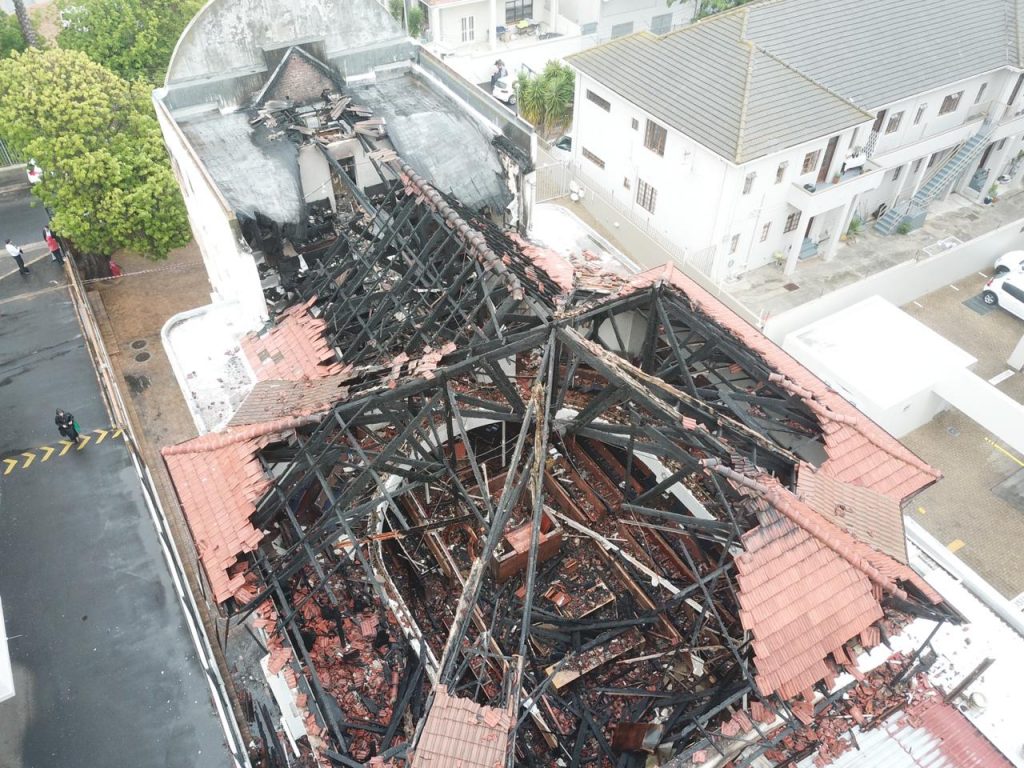 A devastating fire ravaged Beit Midrash Morasha in Cape Town, South Africa, overnight Tuesday. B’chasdei Shamayim, no one was hurt, but the shul was badly damaged and the shul’s seven sifrei Torah were unfortunately destroyed.

Theo Lane, a spokesperson for the City of Cape Town Fire and Rescue Services, said, “Just before 23:00 [on Tuesday] Fire and Rescue responded to a synagogue that was alight in Arthur’s Road, Sea Point. Twenty-two firefighters, four fire engines, one aerial appliance and a rescue vehicle responded to the incident. No injuries were reported. The cause of the fire at this stage is undetermined.”

Sea Point is a heavily Jewish area in northwest Cape Town. The modern Orthodox shul, which is known for its friendly atmosphere, has been on the site in Arthur’s Road since the 1950s. As news of the fire spread, members and friends came to the shul to see if they could be of any assistance. Firefighters bravely carried piles of sefarim out of the shul, and they were passed hand to hand by weeping members to a safe place. Tragically, it was not possible to save the sifrei Torah, and when this became known, the Shul’s Rav, Rabbi Sam Thurgood, recited Kaddish.

The South African Jewish Board of Deputies issued a statement, expressing their solidarity with Rabbi Thurgood and the kehillah. Rael Kaimowitz, chairman of the Cape Town SAJBD. said, “The SAJBD (Cape Council) can confirm on behalf of the synagogue that there are no injuries. Investigators report no signs of foul play at this stage and await the outcome of a full investigation.

“The City of Cape Town Fire and Rescue Services need to be thanked for their bravery as they battle this blaze. We know that every effort is being made to save any holy books and religious articles.”

On Wednesday morning, a minyan for Shacharis took place outside the shul. The SAJBD publicized this and encouraged people to participate, saying, “Let’s stand together as a community. May the light of Chanukah illuminate this terrible darkness.”

“Dear community, you may have heard the terrible news of the fire in the shul tonight. Everyone is okay and although the damage is substantial, whatever is lost can be rebuilt. At this point we need prayers and mitzvot, but there will be a great deal needed in the days and months ahead. We will update you on the way forward as we have a clearer idea of the path to be charted. Rabbi Sam Thurgood.”

South African Chief Rabbi Warren Goldstein sent a message of support, saying the kehillah was “heartbroken” at the “devastating news.” Chief Rabbi Goldstein mourned the loss of the sifrei Torah, while giving thanks to Hashem that no one was hurt. He urged everyone to stand together and offer their support to the kehillah.