Community Bereft of Its Magnificence, Splendor and Grandeur
Community 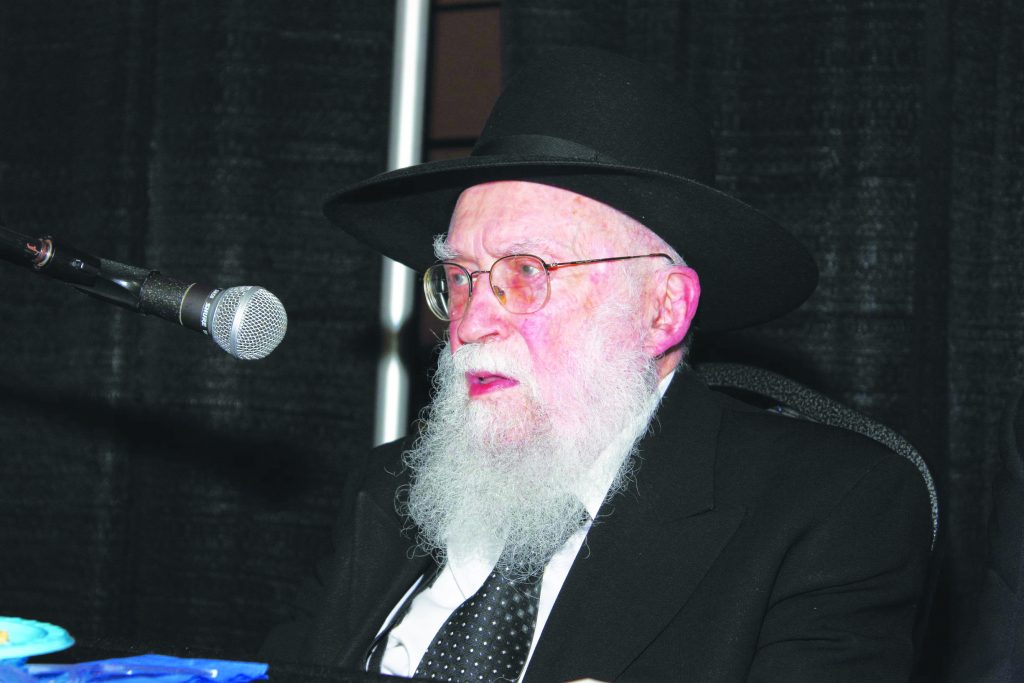 Upon Hagaon Harav Avrohom Chaim Levin’s arrival in The Windy City more than half a century ago, Chicago was already well established with shuls, Rabbanim and other organizations to service the community. Like in many other cities of that era, the establishment of a yeshivah gedolah, where talmidim would be engrossed in limud haTorah on an exalted level, was not at the top of the lay leaders’ agenda. Yet Rav Levin, zt”l, then but a relatively young talmid of Telshe Yeshiva in Cleveland, took the city by storm. He was on a mission to establish a citadel of Torah for a new generation, and he managed to reconfigure the city. Fifty years later, Chicago has been transformed into a bastion of Torah, where yeshivos, kollelim, and a vast array of Torah learning abounds.

“Rav Levin was involved in every aspect of the city,” Harav Zev Cohen, the prestigious Rav of Congregation Adas Yeshurun of Chicago, told Hamodia. “He took achrayus for the community and for the Rabbanim, and I communicated with him weekly. He understood the needs of a Rav, since his father, Harav Lezer Levin, zt”l, was a Rav in Detroit for over half a century. I arrived at a time when the new Rabbanim in the city were of a more yeshivishe bent. He held our hands and helped us carry out our duties.”

As a talmid of the Mesivta of Long Beach, Rav Cohen recalled a discussion he had with his Rosh Yeshivah, Harav Yitzchok Feigelstock, shlita, when he assumed his position 39 years ago. “In the entire yeshivah velt, there is no one else like Rav Levin,” said Rav Cohen, “and my Rebbi told me that I should bring all she’eilos to him. He showed no shtoltz; he had no airs about him. He would listen to our queries, and took an active role in all areas, whether it was the day camps and overnight camps or other issues. His word was final, but it was always done with shalom. He showed dignity and respect for those many years his junior and commanded respect from all circles.”

In a discussion with Rabbi Nosson Moller, Menahel of Yeshiva Tiferes Tzvi, a new dimension of Rav Levin’s leadership came to light. “I arrived in Chicago several years ago and Rav Levin was warm and welcoming, in line with everything we all know about him. Yet I discovered something surprising, which really amazed me. As a Menahel, I became involved in the local Pirchei, where young boys gather on Shabbos afternoon to spend time in a Torah atmosphere. From my experience elsewhere, I was worried about the quality of the group leaders. Yet, to my astonishment, I discovered that Rav Levin would instruct his best talmidim, the masmidim who would otherwise be learning in the beis medrash, to become Pirchei leaders. He told them that bachurim have to learn achrayus, and he felt that giving of their time to be Pirchei leaders would grant them the opportunity to develop their sense of achrayus.”

Rabbi Muller shared another remarkable story, which only came to light inadvertently. “When I began as Menahel in Yeshiva Ateres Tzvi, the yeshivah was in the process of moving. I happened to open a random drawer and found an old letter written by Rav Levin decades ago to the Menahel of that era. The lessons I learned from that three-page letter are priceless.”

It seems that Rav Levin had decided to send one of his children to Detroit for the coming year, since he felt the child would be able to gain much from spending time with his zeide, Rabbi Lezer Levin. In his letter, Harav Avrohom Chaim Levin wrote that he felt that parents have the ultimate responsibility to raise their child as they see fit, since they have the best understanding of what the child needs for his or her growth and development. Nevertheless, he wrote, he felt mentchlichkeit requires him to explain the motivation for his decision, and he went on to provide four reasons for it.

Reb Tzvi Feiner, who has lived in Chicago for the past 20 years, describes Rav Levin as the true manhig of the city to whom all Torah leadership looked up to. “He was respected by all types, and his hadrachah and guidance was sought across the board. He only looked to increase kvod Shamayim and to increase the glory of the Torah.”

Mrs. Tzivia Fishbane, a longtime Chicago resident, told Hamodia of the time decades ago when there was little choice of social groups for the youngsters. Her father, Rabbi Sholom Yehudah Romanovski, wished to establish a Bnos branch, and Rav Levin, who fashioned the city in an Agudah mold, greatly encouraged him in forming Bnos groups for the girls. Rabbi Romanovski’s granddaughter, Mrs. Suri Aron (nee Katz), is today the head of Chicago’s Bnos branches.

Rabbi Sholom Yehudah Fishbane, another grandchild of Rabbi Romanovski, was raised in Chicago and is a devoted talmid of Rav Levin. Several years ago, when Rabbi Fishbane assumed the position of kashruth administrator for the Chicago Rabbinical Council, he consulted with his Rosh Yeshivah, who encouraged him in his work. “The Rosh Yeshivah took great pride that his talmidim, who are bnei Torah, are undertaking responsibilities for the sake of the klal. Indeed, the Rosh Yeshivah encourages and is proud of the accomplishments of all bnei Torah, whether or not they are his talmidim. When my father released the first of his three volumes of his sefarim, he wrote him a warm michtav brachah, which my father cherishes to this day.”

Today, the city of Chicago boasts hundreds of families and dozens of mosdos that carry on the legacy of the prince they had in their midst. Bereft as they may be of their magnificence, splendor and grandeur, the foundations of Torah that Harav Avrohom Chaim Levin established in Chicago will endure for generations to come.