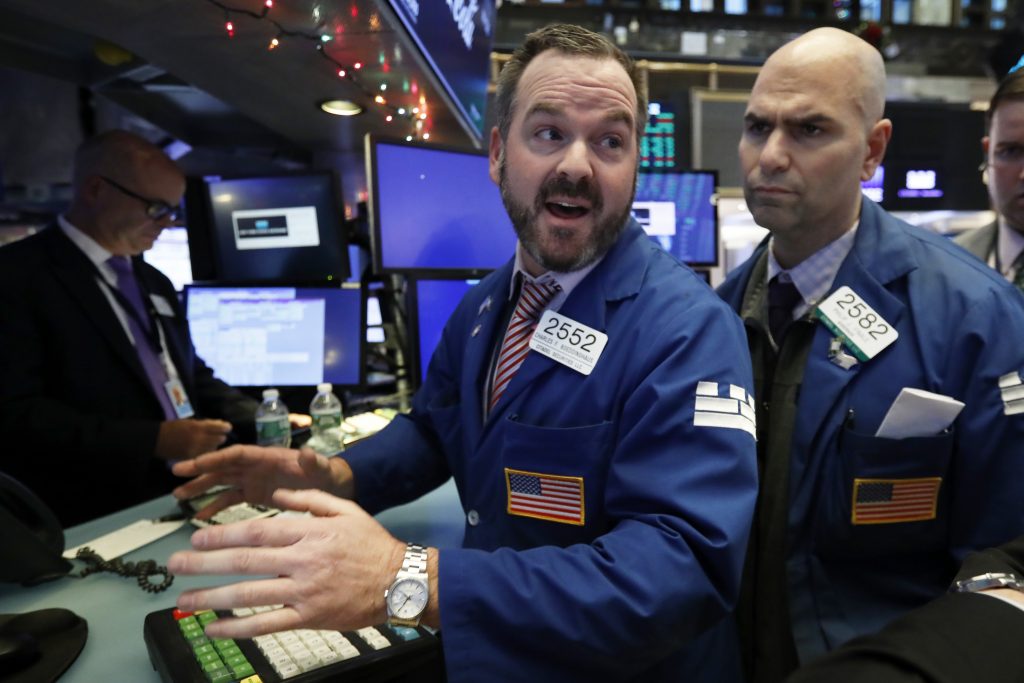 The wave of selling erased the market’s gains from a day earlier, when stocks rallied on news that the U.S. and China had agreed to a temporary truce in their trade dispute. Investors’ confidence in that truce appeared to falter Tuesday, contributing to renewed fears about a slowing global economy.

Technology companies, banks and industrial stocks accounted for much of the sell-off as traders moved assets into the relative safety of U.S. government bonds, driving yields sharply lower. Utilities stocks rose. Smaller-company stocks fell more than the rest of the market.

“You have the drop in bond yields and the implications on growth going forward,” said Willie Delwiche, investment strategist at Baird. “The bigger issue is you have this unwind from yesterday’s rally.”

The sell-off came ahead of Wednesday’s closure of U.S. stock and bond markets in observance of a national day of mourning for former President George H.W. Bush.

The sharp turn in the markets followed a strong rally on Monday fueled by optimism over the news that President Donald Trump and his Chinese counterpart Xi Jinping had agreed at the G-20 summit over the weekend to a temporary 90-day stand-down in the two nations’ escalating trade dispute.

But the market’s optimism faded Tuesday amid published reports questioning the scant details out of the Trump-Xi talks and growing skepticism that Beijing will yield to U.S. demands anytime soon.

“The actual amount of concrete progress made at this meeting appears to have been quite limited,” Alec Phillips and other economists at Goldman Sachs wrote in a research note.

“The sense is that there’s less and less agreement between the two sides about what actually took place,” Delwiche said. “There was a rally in the expectation that something had happened, the problem is that something turned out to be nothing.”

The trade dispute has rattled markets in recent months as signs emerged that it has begun affecting corporate profits. That’s stoked traders’ fears that if it drags much longer it could further weigh on global economic growth.

The jitters helped drive demand for government bonds Tuesday, pushing prices higher. The yield on the 10-year Treasury note fell to 2.91 percent from 2.99 percent late Monday, a large move. The slide in bond yields, which affect interest rates on mortgages and other consumer loans, weighed on bank stocks. Citigroup fell 5.4 percent to $61.63.

Chipmakers were among the biggest decliners in a technology sector slide. Advanced Micro Devices dropped 9.4 percent to $21.49, while Micron Technology lost 6.4 percent to $37.47.

Apple lost 3.7 percent to $177.99 after the consumer electronics giant was downgraded by HSBC analysts, citing the possibility that iPhone volume and value growth may moderate due to a saturated mobile phone market.

Oil prices headed higher ahead of an OPEC meeting on Thursday, where members are expected to agree to cut output in 2019. Benchmark U.S. crude rose 0.6 percent to $53.27 per barrel in New York. Brent crude, the international standard, added 0.9 percent to $62.22 per barrel in London.