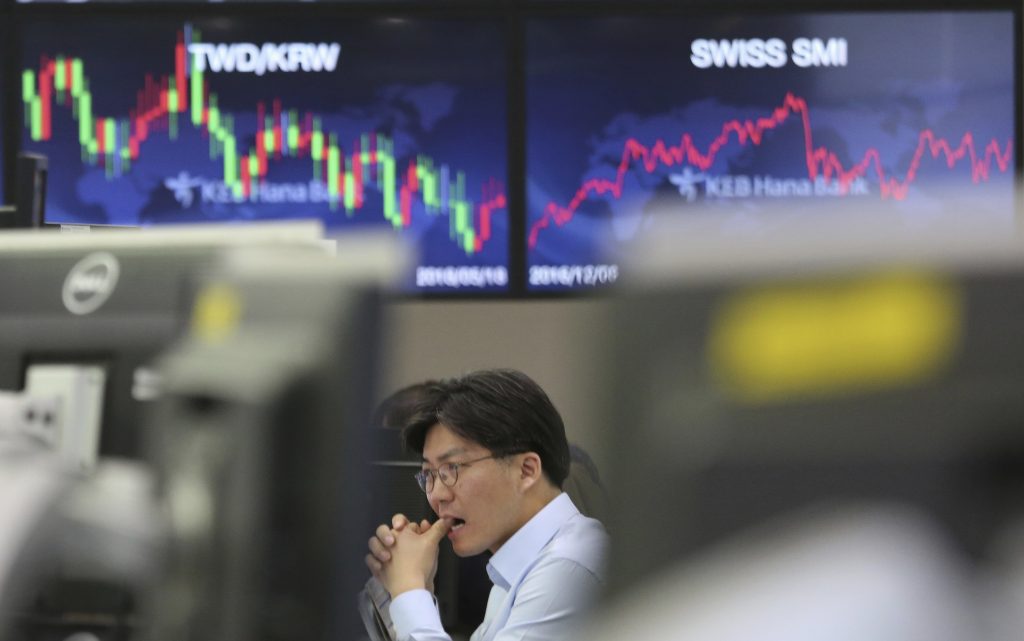 Asian shares fell on Tuesday as relief over a pause in escalation of the trade war between the U.S. and China gave way to doubt over the two countries’ ability to resolve differences.

Adding to market worries, an inversion at the short end of the U.S. yield curve raised the specter of a possible U.S. recession.

The sell-off appeared likely to extend into European trading, with spread-betters expecting London’s FTSE 100 to fall 0.2 percent at the open, and both Frankfurt’s DAX and Paris’ CAC 40 to fall 0.4 percent.

But Chinese blue-chip shares in Shenzhen and Shanghai added 0.2 percent after struggling to break into positive territory for much of the day.

The temporary freeze on further hostilities in the trade war between the United States and China had sparked a global rally in equity markets on Monday, pushing MSCI’s all-country world index up 1.3 percent.

But even before the trading day ended, major U.S. indexes pulled back from intraday highs on skepticism that Washington and Beijing can resolve their deep-seated differences in the three-month negotiating window that was agreed, after which tariffs could escalate again.

“It seems that more details and signs of progress will be needed if the initial trade truce warm fuzzy feeling is to be sustained,” National Australia Bank analysts said in a note to clients.

Already, there was confusion over when the 90-day period would start. A White House official said it started on Dec. 1, while earlier, White House economic adviser Larry Kudlow told reporters it would start on Jan. 1.

Moreover, none of the commitments that U.S. officials said had been given by China, including reducing its 40-percent tariffs on autos, were agreed to in writing and specifics had yet to be hammered out.

“The fear across global markets is that this is just a short-term relief rally and we will find ourselves back where we were a few weeks ago and staring down the barrel of a long-term global growth slow down,” Nick Twidale, Sydney-based analyst at Rakuten Securities Australia said in a note.

Analysts expect an inversion of the two-year, 10-year yield curve – seen as a predictor of a U.S. recession – to follow suit.

On Tuesday, the yield on benchmark 10-year Treasury notes was at 2.9515 percent compared with its U.S. close of 2.991 percent on Monday.

The two-year yield also fell, but by a narrower margin, touching 2.8109 percent compared with a U.S. close of 2.833 percent.

That put the spread between 10-year and two-year Treasuries around 14 basis points. Earlier in the day, the spread hits its narrowest level since July 2007.

“The market pricing evident in the yield curve inversion from three to five segment of the curve, as well as the dip in the 10-year yield below 3 percent yesterday, goes to reinforce these concerns” about the U.S. economy potentially heading into a recession, said Prakash Sakpal, an economist at ING in Singapore.

However, he added that solid U.S. manufacturing data released Monday pointed to a stronger economic outlook, with new orders a “key driver” in boosting activity.

In contrast to faltering Asian equity markets, oil prices continued to rise after surging 4 percent the day before on the U.S.-China trade truce, and ahead of a key OPEC meeting expected to lead to supply cuts.

In the currency market, the dollar index, which tracks the greenback against a basket of peers, softened 0.3 percent to 96.718.

As the dollar weakened, China’s yuan continued to surge, and was trading at 6.8419 to the dollar around 0700 GMT. Since Friday, it has added more than 1,000 pips against the greenback.

“The gain in the yuan is no surprise given the ceasefire and the yuan’s weakness over the course of this year as the trade tensions escalated,” said Khoon Goh, head of Asia research for ANZ Banking Group in Singapore.

Goh said that comments from U.S. Trade Secretary Steven Mnuchin that the yuan had been discussed during dinner between the Chinese and U.S. presidents “suggests that perhaps there is an intention for the Chinese side to ensure that the currency doesn’t weaken further,” providing a further boost to the yuan.

Federal Reserve Chairman Jerome Powell was scheduled to testify on Wednesday to a congressional Joint Economic Committee, but the hearing was postponed because of a national day of mourning for U.S. President George H.W. Bush, who died on Friday.

The dollar came under pressure last week on Powell’s comments that rates were nearing neutral levels, which markets widely interpreted as signalling a slowdown in the Fed’s rate-hike cycle.