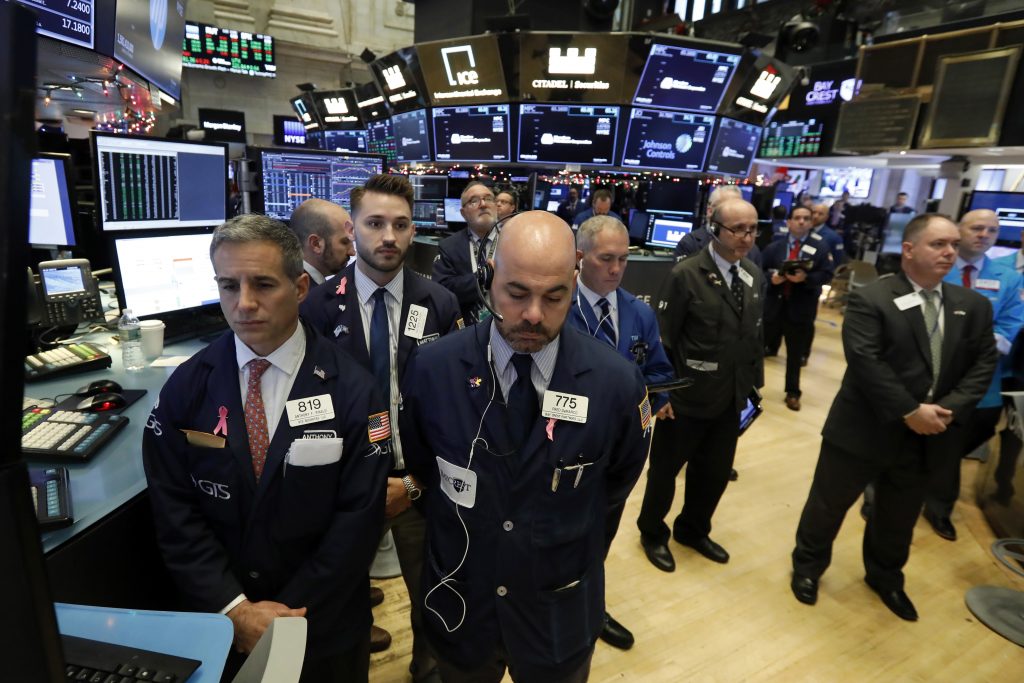 Stocks moved broadly higher in afternoon trading on Wall Street Monday after the U.S. and China agreed to a 90-day truce in their escalating trade dispute.

The rally, which lost some of its early morning momentum, followed gains in overseas markets as investors welcomed news of the temporary stand-down, which was agreed to over dinner between President Donald Trump and his Chinese counterpart Xi Jinping at the G-20 summit over the weekend.

The long-running dispute between the world’s two largest economies has rattled investors for months, stoking traders’ fears that it could begin dragging down corporate profits and weighing on global economic growth.

The development helped extend a swift turnaround for the market, which notched its biggest weekly gain in nearly seven years last week after Fed Chairman Jerome Powell indicated the central bank might consider a pause in rate hikes next year while it gauges the impact of its credit tightening program.

U.S. traders observed a moment of silence before markets opened Monday in honor of former President George H.W. Bush, who died Friday at 94. The New York Stock Exchange and Nasdaq said they will close trading Wednesday in observance of a national day of mourning for Bush. The federal government will also be closed.

After a steep decline in October, stocks steadied in early November. But the selling picked up again as investors abandoned high-flying technology stocks amid concerns over the U.S.-China trade tussle and slowing global economic growth and bailed on energy stocks as the price of oil plummeted.

Presidents Trump and Xi of China met at the G-20 summit over the weekend and agreed to a ceasefire lasting for at least 90 days, to allow time to smooth out a dispute over Chinese technology policies that the U.S. and other trading partners consider predatory.

President Trump agreed to hold off on plans to raise tariffs on $200 billion in Chinese goods, which were supposed to kick in on Jan. 1. In return, Xi agreed to buy a “very substantial amount” of agricultural, energy and industrial products from the U.S. to reduce its large trade deficit with China, the White House said.

The U.S. had announced tariffs on $250 billion in Chinese imports this year, with the tax rate on many products set to rise Jan. 1, while China put new taxes on $110 billion in U.S. goods.

While the truce has the potential to steady markets through the end of the year, the countries still need to hammer out a lasting trade deal.

“Three months is not a very long time to achieve this so there are naturally plenty of skeptics out there but this is a rare piece of good news in a conflict that has yet to produce any,” said Craig Erlam, senior market analyst at OANDA.

The trade truce was one of several factors helping push oil prices higher Monday. Crude prices also jumped on news that Qatar will withdraw from OPEC in January. The move, which marks the first time a Mideast nation has exited the cartel since its founding in 1960, came ahead of an OPEC meeting on Thursday.

In addition, the government of the Canadian province of Alberta announced a large cut in oil production Monday.

“We expect OPEC to follow suit and agree to a production cut in Vienna this coming Thursday,” analysts with Goldman Sachs wrote in a published note Monday.

Oil prices had been falling in recent weeks as supplies built up, partly because the U.S. agreed to hold off on sanctions for countries that import oil from Iran. Traders have also been worried that a slowdown in global economic growth will reduce demand for fuels.

Auto manufacturers also rose after Trump said on Twitter late Sunday that Beijing agreed to cut import duties on U.S. autos. There was no Chinese confirmation of the move, which would have little impact on trade because most American vehicles sold in China are made there.

Tribune Media jumped 10.3 percent to $44.40 after the TV station owner agreed to be acquired by Nexstar Media Group, four months after a bid from Sinclair Broadcast Group collapsed. Nextar shares rose 2.6 percent to $84.75.

GlaxoSmithKline PLC slumped 7.5 percent to $38.73 after the drugmaker agreed to acquire Tesaro, which makes the cancer treatment Zejula. Shares in Tesaro soared 58.6 percent to $73.56.

Meanwhile, Wynn Resorts gained 9.6 percent to $119.89 after the gambling revenue in Macau rose last month at a higher rate than analysts expected.