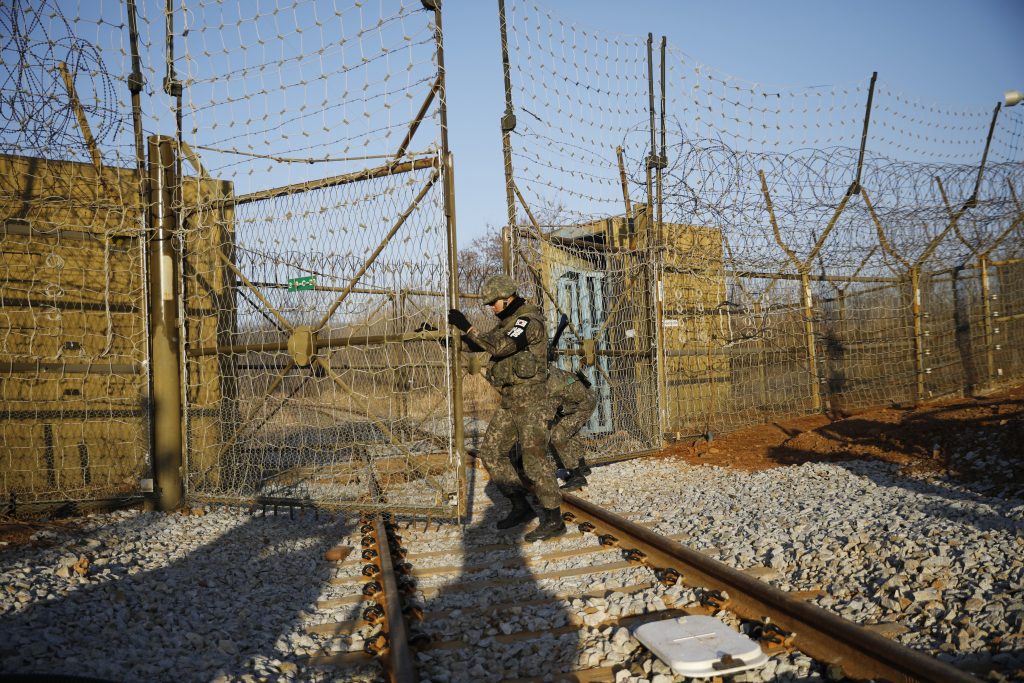 A South Korean train rolled into North Korea for the first time in a decade on Friday as the countries began joint surveys on Northern railway sections they hope someday to connect with the South.

The weeks-long inspections represent one of the most significant goodwill gestures between the Koreas in past months as they push ahead with engagement amid a stalemate in larger negotiations between Washington and Pyongyang to resolve the nuclear standoff.

Also on Friday, an official from Seoul’s Defense Ministry said the North and South Korean military completed removing 20 front-line guard posts and land mines from a border area where they plan to start their first-ever joint search for remains of soldiers killed during the 1950-53 Korean War. The official spoke on condition of anonymity, citing office rules.

The two Koreas plan to hold a groundbreaking ceremony by the end of the year on an ambitious project to connect their railways and roads as agreed by their leaders. But beyond surveys and tape-cuttings, the Koreas cannot move much further along without the removal of U.S.-led sanctions against the North, which isn’t likely before it takes firmer steps toward relinquishing its nuclear weapons and missiles.

“Through the railways that will be connected in one, the South and North will prosper together and peace in the Korean Peninsula will become firmer,” South Korean Unification Minister Cho Myoung-gyon said during a ceremony at Dorasan Station near the border. “We will maintain close consultation with related nations so that the project to connect the South and North’s railways could proceed with international support.”

The plan to modernize North Korea’s outdated railways and roads and connect them with the South was among many agreements reached between North Korean leader Kim Jong Un and South Korean President Moon Jae-in, who met three times this year as part of a diplomatic push that eased tensions over the North’s nuclear program.

In their most recent summit in Pyongyang in September, Kim and Moon committed to reviving economic cooperation when possible, voicing optimism that international sanctions could end to allow such activity. They also announced measures to reduce conventional military threats, such as creating buffer zones along their land and sea boundaries and a no-fly zone above the border and also removing a number of guard posts and destroying mines in border areas.

After whistling twice, a South Korean train engine pulling six rail cars slowly departed toward North Korea’s Panmun Station, near the town of Kaesong, where the cars were to be reconnected to a North Korean engine.

According to plans outlined by Cho’s ministry, Korean officials will begin by surveying a 400-kilometer (248-mile) railroad section between Kaesong and Sinuiju that cuts through the North’s central region and northeastern coast. From Dec. 8 to 17, the Koreas will inspect an 800-kilometer (497-mile) railway section along the country’s eastern coast, stretching from an area near the scenic Diamond Mountain to a riverside station near the North’s border with Russia.

During the surveys, a North Korean train engine will pull six South Korean cars — including passenger and sleeping cars, a power-generator car and a fuel tanker — to test operability.

The Unification Ministry said the North will attach its own cars to the engine, but it was unclear how many. Fifty-six South Korean officials will participate in the surveys, 28 each for the inspections on the western and eastern sections, the ministry said.

The Koreas in December 2007 began freight services between South Korea’s Munsan Station in Paju and the North’s Panmun Station to support operations at a now-shuttered joint factory park in Kaesong.

The South used the trains to move construction materials north, while clothing and shoes made at the factory park were sent south. The line was cut in November 2008 due to political tensions over North Korea’s nuclear program and the hard-line policies of a new conservative government in Seoul.

The Kaesong factory park was shut down under the South’s previous conservative government in February 2016 following a North Korean nuclear test and long-range rocket launch.

The joint railway surveys were on hold before the U.N. Security Council on Saturday granted an exemption to sanctions that allowed them to proceed. Seoul initially said the joint surveys wouldn’t violate U.N. sanctions but later said that Washington had different views and the two sides had discussed the matter.