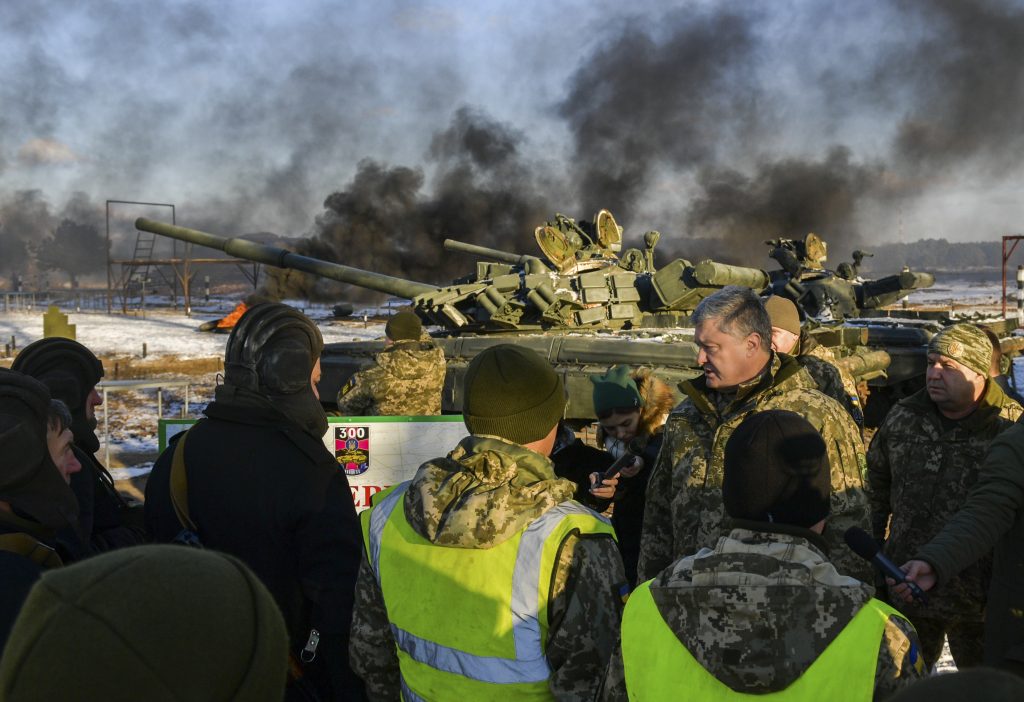 The Ukrainian president has urged NATO to deploy naval ships to the Sea of Azov, a proposal that has been sharply criticized by Russia as a provocation that could further inflame tensions between the two countries.

In an interview in the German daily Bild, published Thursday, President Petro Poroshenko laid out his hope that NATO would “relocate naval ships to the Sea of Azov in order to assist Ukraine and provide security” against the expansionist ambitions of Russian President Vladimir Putin.

His call follows the weekend incident in which the Russian coast guard fired on and seized three Ukrainian vessels and their crews. Russia charged that the Ukrainian vessels had failed to obtain permission to pass from the Black Sea into the Sea of Azov through the Kerch Strait between Russia’s mainland and the Crimean Peninsula it annexed from Ukraine in 2014. Ukraine insisted that its vessels were operating in line with international maritime rules.

The Ukrainian government said Thursday that Russia has blocked commercial traffic to and from Ukrainian ports on the Sea of Azov, a claim Russia quickly denied.

“Putin wants nothing less but to occupy the sea,” Poroshenko said. “The only language he understands is the unity of the Western world.”

Putin, for his part, criticized the West for what he described as connivance with Ukraine’s “provocation.”

“The authorities in Kiev are successfully selling anti-Russian sentiments as they have nothing else left to sell,” he said. “They can get away with whatever they do. If they want to eat babies for breakfast today, they will likely get served too.”

German Chancellor Angela Merkel said she plans to press Putin at this weekend’s G-20 summit in Argentina to urge the release of the ships and crews.

“We can only resolve this in talks with one another because there is no military solution to all of these conflicts,” she said.

NATO said it already has a strong presence in the Black Sea region. The alliance’s spokeswoman Oana Lungescu said NATO ships routinely patrol and exercise in the Black Sea, and that they have spent 120 days there this year compared to 80 in 2017.

She noted that several NATO allies conduct air policing and reconnaissance flights in the region, adding that members Bulgaria, Romania, and Turkey border the Black Sea and have their own military equipment deployed.

“There is already a lot of NATO in the Black Sea, and we will continue to assess our presence in the region,” Lungescu said.

While NATO condemned the Russian action, the alliance is not expected to send ships into the Sea of Azov, a deployment that could trigger a confrontation with Russia. A 2003 treaty between Russia and Ukraine stipulates that permission from both countries is required for warships from others to enter the internal sea.

In response to Sunday’s events, Poroshenko has imposed martial law in much of the country, a move that won parliamentary backing. Putin accused his Ukrainian counterpart of provoking the naval incident in a bid to impose martial law to shore up his sagging popularity and sideline competitors ahead of March’s presidential election.

Kremlin spokesman Dmitry Peskov said Poroshenko’s request for NATO to send warships into the Sea of Azov is “clearly aimed at provoking further tensions,” adding that it was driven by the Ukrainian leader’s “electoral and domestic policy motives.”

Ukraine’s Ministry of Infrastructure says Russia has blocked 35 merchant ships from leaving or entering the Sea of Azov since Wednesday.

The ministry said Thursday 18 ships have been stuck in the Black Sea, waiting to pass through the Kerch Strait into the Sea of Azov. Another 17 vessels were unable to sail out of Ukrainian ports of Mariupol and Berdyansk on the Sea of Azov, it said.

Peskov insisted that Russian authorities haven’t imposed any restrictions on the ships’ passage, adding that a possible logjam could have been linked to poor weather.

Ukraine and Russia have been in a tug-of-war since Moscow’s annexation of the Crimean peninsula from Ukraine in 2014. Russia has also supported separatists in Ukraine’s east with clandestine dispatches of troops and weapons. The fighting there has killed at least 10,000 people since 2014 but eased somewhat after a 2015 truce.

The naval incident marked the first overt collision between Russian and Ukrainian militaries since the 1991 collapse of the Soviet Union. It has fueled fears of a wider conflict and has drawn strong criticism of Russia from the U.S. and its allies.

Amid the tensions, the Russian military said it had deployed another batch of the long-range, S-400 air defense missile systems to Crimea.

Turkish President Recep Tayyip Erdogan said he discussed the possibility of a Turkish mediation to resolve tensions and held separate telephone conversations with Putin and Poroshenko on Thursday.

Asked about the Turkish offer, Peskov responded that “Moscow is grateful to all those willing to help de-escalate the tensions provoked by the Ukrainian side, but doesn’t see any need for mediation efforts.”

“Those who have such opportunities could help by exerting influence on the Ukrainian authorities,” Peskov said.