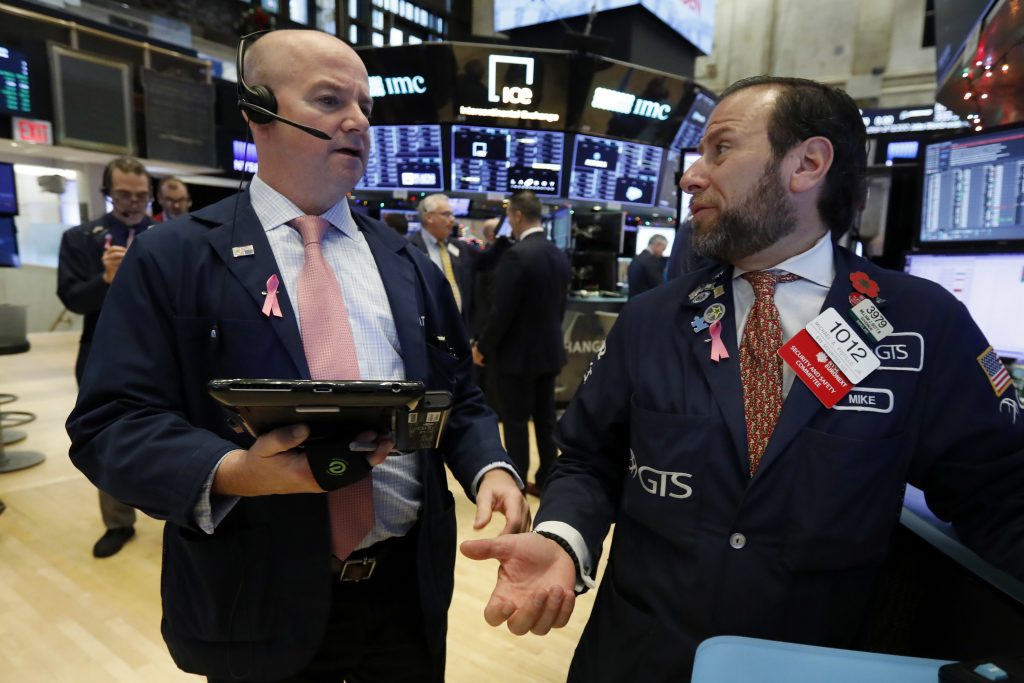 U.S. stocks are slightly lower Thursday after huge gains the day before. Technology companies are taking some of the largest losses and banks are down with interest rates, but energy companies are rising as oil prices turn higher. Health-care companies, which have done far better than the rest of the stock market recently, continued to rise.

The S&P 500 index is coming off its largest rally in eight months and has climbed 4 percent this week.

Stocks surged after Federal Reserve Chairman Jerome Powell suggested in a speech that the Fed might be almost done raising interest rates and is willing to stop raising rates at least temporarily so it can assess the effects of the last few years of increases. Investors were happy to hear that, as they’ve been nervous that climbing interest rates will contribute to a damaging slowdown in economic growth. That fear is one of the major reasons behind the stock market’s recent slide.

BONDS: Bond prices edged higher. The yield on the 10-year Treasury note fell to 3.03 percent from 3.04 percent as investors expected slower increases in interest rates. That hurt banks, which make less money from mortgages and other types of loans when rates fall. Bank of America shed 1.2 percent to $28.08 and Citigroup slid 0.9 percent to $65.

SEARCHED BANK: German authorities suspect that Deutsche Bank employees helped clients set up offshore companies in tax havens to launder hundreds of millions of euros. A prosecutor in Frankfurt said the investigation focuses on two employees and possibly other suspects. Deutsche Bank stock lost 5 percent to $9.40. It’s down 51 percent so far this year.

CALL YOUR DOCTOR: Medical lab operator Quest Diagnostics sank 8.9 percent to $88.31 after it cut its annual profit and revenue forecasts. The company cited a host of problems including larger reserves and reduced testing volumes. Rival LabCorp fell 3 percent to $160.18.

CHIP CHIP, HOORAY: Qualcomm stock jumped 3.8 percent to $58.80 after Qualcomm CEO Steve Mollenkopf said the company is close to resolving its long and costly dispute with Apple. Apple stopped making licensing fee payments to Qualcomm following a legal dispute between the companies, and later decided to stop using Qualcomm parts in some of its products.

Health care stocks, meanwhile, have jumped 7 percent in the last month, about double the gains in the broader market. That rally continued Thursday. Insurer UnitedHealth picked up 1.5 percent to $285.20 and medical device maker Medtronic added 1.6 percent to $96.86.

CONSUMER SPENDING: Consumer spending and incomes both climbed in October. The Commerce Department said both figures grew much faster than they did in September. Those are both good signs for future economic growth.