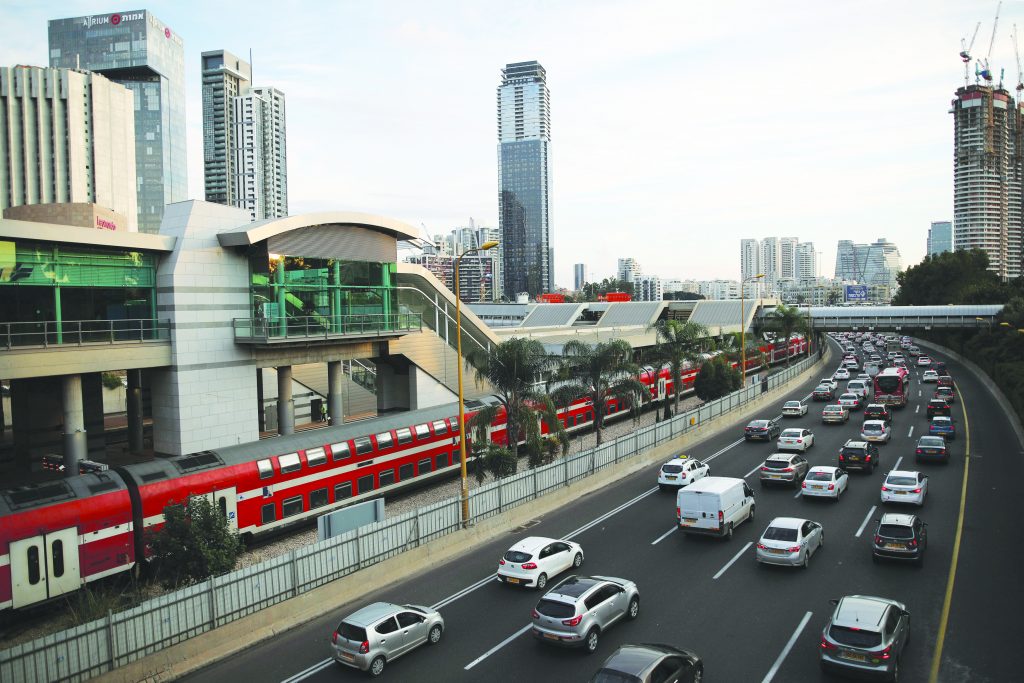 The government is unrolling a major pipeline of investments to get rid of persistent traffic jams that are hampering economic growth.

To unclog the developed world’s most congested roads, the government will partner with private contractors and banks, both Israeli and foreign, marking a shift in policy after a series of transport projects were criticized for delays and mismanagement.

Projects like a Tel Aviv subway, expanding Yerushalayim’s light rail system and construction of highways and toll roads are drawing interest from banks and global contractors.

“These are companies that were never before interested in Israel. The moment you create this certainty, they are here,” said Chizkiyahu, who declined to name the firms he has met.

Israel is a high-tech powerhouse, but years of underinvestment and bungled state management have left its transport network lagging.

Road traffic density, measured by the number of vehicles per kilometer of road, is three times the average among the 36 industrialized countries of the OECD.

Road users lose on average an hour a day in traffic congestion, a hit to productivity that costs the economy about 1.5 percent of annual gross domestic product, according to the International Monetary Fund. That comes out to about $5 billion.

Until a few months ago, the only train connecting Tel Aviv and Yerushalayim still used a track built during the Ottoman Empire and the 57-kilometer journey between Israel’s two largest cities took nearly two hours.

A replacement has cost $2 billion to build and still isn’t finished after 17 years. The 125-year-old Ottoman line was completed in around two years.

Prime Minister Binyamin Netanyahu cut the ribbon in late September, rushing to meet a promise to inaugurate the fast train by the chagim. But for now it runs only as far as Ben Gurion Airport.

Commuters elsewhere in the country have meanwhile complained they have to cram into crowded trains after the government borrowed carriages for the intercity trains from other lines.

Most commuters still choose to drive or take the bus, causing major jams in and out of the cities. A designated fast lane on the final stretch of the Yerushalayim-Tel Aviv highway costs $30 to use in rush hour.

The new strategy, officials said, relies on the private sector to deliver efficiency.

Bids for the $2.7 billion expansion of the Yerushalayim light rail will be taken in the first quarter of 2019. The Finance Ministry has already screened groups that include Canada’s Bombardier and Greece’s GEK Terna.

Until now the government has preferred to finance most projects through the state budget, giving it more control and access to cheaper financing than the private sector.

But that strategy has often backfired, said Lior Mentser, head of project finance and infrastructure at the country’s biggest bank, Hapoalim.

“It’s double the time and money if the government does the project,” he said.

With the $4.6 billion first line of the Tel Aviv metro delayed and over budget, the next two lines, a combined investment of $7.6 billion, will be built in partnership with the private sector. Bidding is open until the end of January.

Israel says it will now consider Public Private Partnerships (PPP) for all projects over NIS 250 million.

Mentser said foreign banks are learning the market, with many willing to participate in a syndicate of lenders but not yet as arrangers.

“Israel is an interesting market. The economy is strong and the government provides a higher safety net than in the rest of the world,” he said, citing guarantees offered for schemes such as toll roads where car numbers might fall short of projections.

With only a limited number of Israeli institutional investors able to handle big projects, the sector is seeing growing interest from banks in Germany, Italy and Japan, said Ido Gonen, a director at Deutsche Bank.

“Israel’s rail projects certainly have the right attributes and will attract international attention. Tel Aviv definitely will be attractive,” he said.

Deutsche Bank tested the waters a few years ago when it helped finance some of the cross-Israel toll highway.

But even the planned jump in investment may not help Israel catch up with other OECD members whose transport networks are more established and only require maintenance.

“Looking forward at the plans for the next 10 to 15 years, it doesn’t seem that the scope of investment will manage to close the gap,” said Bank of Israel economist Shay Tsur.