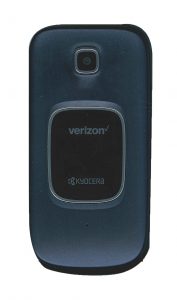 At a time when many in the community are making the switch from 3G to 4G basic phones, experts and consumers are warning that contrary to what is being assumed by many, the internet usage of a popular Kyocera brand of 4G devices cannot be properly blocked.

One Boro Park yungerman, who related his story on condition of anonymity, told how, after purchasing a Kyocera 4G basic phone with Verizon service, he took it to a reputable filtering organization to block both the internet and text messages.

“They warned me that they can’t properly filter it, and that the filter can come off, but I didn’t take them all that seriously,” he told Hamodia. “I thought I had a talk-only phone.”

When he showed his new phone to an acquaintance of his, the latter insisted that the so-called filter is worthless, and claimed that he could prove it.

“He took the phone for a few seconds and pressed a few buttons, and then gave it back to me. I was shocked. The high-speed internet was fully open — and totally unfiltered. Suddenly I was seeing things that no Yid should ever see.”

The yungerman was so horrified by what had happened that he proceeded to break the Kyocera phone in half, and went out to purchase a LG Exalt VN-220 model, which can be properly blocked.

“People have to realize that even after putting on a so-called block, these phones still pose a real danger. In my case, the filter was removed by someone who knew what he was doing — but that information is readily available. It was also obvious to me that it could also come off by accidentally pressing the wrong buttons,” the yungerman stressed.

In response to a query by Hamodia, TAG of Boro Park said in a statement that, after reviewing the pros and cons, they decided to offer a service for the Kyocera 4G phones that would “block the dangerous parts of the device for people, with the best possible measures currently available,” along with a clear disclaimer to make customers aware that it is not considered “kosher” — nor is it safe, especially for teens and children.

“Although every person bringing in this device to block is being advised to instead consider other, safer devices, it looks like some people do not take it seriously and consider it to be identical to the old basic phones. It isn’t.

“Since the phone is capable of having high-speed internet, it is considered a smartphone in certain aspects, and therefore TAG was instructed by its Rabbanim not to service the device for bachurim and girls at all, and parents must be aware not to buy these phones for children at all, nor to buy it as a family phone, even though it was blocked by TAG.”

While Verizon gives consumers the option of blocking the internet service they provide for these devices from their end, according to TAG, this doesn’t solve the issue at all.

“When it is blocked by Verizon, the phone can still freely connect to the internet through Wi-Fi. There is no shortage of areas of open Wi-Fi throughout our community and beyond, which means that for all practical purposes, such a phone has open internet with no filter.”

While the LG Exalt VN-220 model can be properly blocked by TAG, some prefer the features of the Kyocera models.

One Brooklyn resident, who asked to be identified only as Shia, says that so far he is still holding on to his 3G model.

“Verizon came under a lot of pressure for the way they are treating customers who still have 3G phones, and I see a definite improvement in service in the past couple of months. Though I still struggle with service and lose some calls when I am in the area of 16th and 17th avenues in Boro Park, my phone is baruch Hashem working very well almost everywhere else.”

Shia says that he knows it is a matter of time until 3G service will come to an end, but he feels it is worth the wait.

“It is possible that in a few more months, there will be better options available. But if not, I have no doubt that I will get the LG Exalt model. We have no inkling of the mesirus nefesh of past generations for Torah and mitzvos. The least we can do is be mevater on a few features and get a spiritually safe phone.”