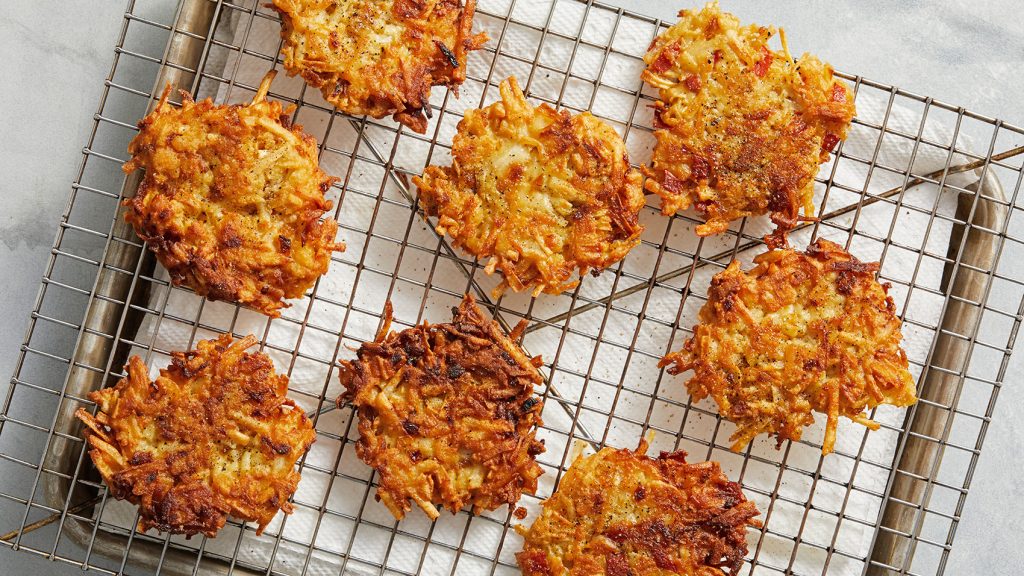 Food writers bestow “hack” or “genius” upon techniques and recipes that are novel and simplified, but I offer another subgenre that is worth your consideration: The “why not?”

As in, when making the delightful potato pancakes called latkes, start with shredded hash brown potatoes. Why not? Clever Chanukah cooks have been using the frozen product for years. Their options before that were:

I am almost sure the graying is why sweet potato latkes, parsnip latkes, turnip latkes, beet latkes and leek latkes rose to prominence. Because it is hard to top freshly made, golden brown, deliciously crispy potato latkes – unless we are talking a slice of smoked salmon, a dollop of sour cream and a sprig of dill.

You might counter the “why not” with: Because those frozen potatoes have additives such as disodium dihydrogen (sodium acid) pyrophosphate. Well, as those things go, this one works in a latke-maker’s favor. The chemical helps keep the raw potato from discoloring, and the scientific community’s verdict indicates this type of additive is acceptable in small amounts, on occasion.

Although the package may indicate “keep frozen,” I’m here to say that if you do go with the “why not” approach, refrigerate the appropriate amount of frozen shredded hash brown potatoes in a towel-lined bowl overnight. This will wick away moisture – and there will be more moisture to wring out. Even so, I find these potatoes become drier, and therefore better for latke-making, than the hand-shredded/wrung out ones I typically do.

The best part of the accompanying recipe might not even be the use of pre-shredded spuds, but rather the onion component. A worthy latke contains onion in some form; it’s not worth arguing in the comments field or via email. I will simply not engage.

Rather than mincing and grating and crying lots of oniony tears, I have chosen to caramelize a pot’s worth. This takes about an hour, including the slicing (okay, a few tears there) and you’ll have plenty left over to grace a sandwich or omelet or what have you. Caramelized onion will bind the potato mixture and infuse it with oniony goodness, not to mention nice color.

Make ahead: The frozen hash browns need to defrost in a towel-lined bowl overnight in the refrigerator.

Place the frozen shredded potatoes in a bowl lined with a clean kitchen towel or layers of cheesecloth. Gather the cloth together and squeeze out as much moisture as possible, over the sink.

Open the cloth over a mixing bowl, letting the shredded potatoes fall in there. Add the caramelized onions, flour, egg, baking powder, pepper and the salt (to taste), if using, stirring to incorporate.

Pour enough of the oil into a large nonstick skillet to fill 1/4 inch. Heat over medium heat. Add 4 or 5 large spoonfuls of the potato mixture to the pan, flattening them slightly. Cook for 3 minutes or until browned on the edges, then use 2 spatulas to turn them over, gently, away from you in the pan. Cook for about 2 minutes, then transfer to the wire rack to drain. Repeat to use all the potato mixture.

Season the latkes lightly with pepper, as needed. Serve warm.

NOTE: To caramelize onions, combine 4 peeled, thinly sliced yellow onions, 1/3 cup water and a pinch each of kosher salt and sugar in a Dutch oven or large pot over medium heat. Cook for 6 to 8 minutes, stirring once or twice, until just softened and a little steamy, then reduce the heat to medium-low and cook for about 40 minutes, until the onions have turned a rich amber-brown and taste slightly sweet. You’ll have more than you need for this recipe; the leftovers can be refrigerated for up to 1 week, or frozen for up to 6 months.

Adapted from a recipe at KosherEveryday.com.