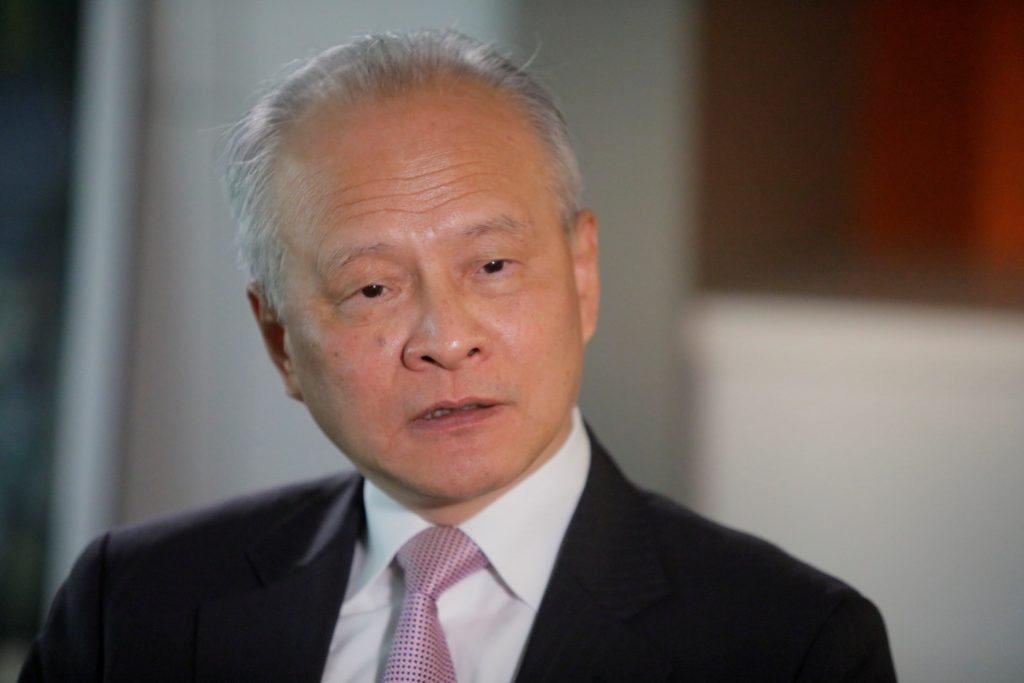 China is going to this week’s G-20 summit hoping for a deal to ease a damaging trade war with the United States, Beijing’s ambassador to Washington said on Tuesday while warning of dire consequences if U.S. hardliners try to separate the world’s two largest economies.

Speaking to Reuters before heading to join Chinese President Xi Jinping’s delegation at the Group of 20 summit in Buenos Aires, Cui Tiankai said China and the United States had a shared responsibility to cooperate in the interests of the global economy.

Asked whether he thought hardliners in the White House were seeking to separate the closely linked U.S. and Chinese economies, Cui said he did not think it was possible or helpful to do so, adding “I don’t know if people really realize the possible consequences – the impact, the negative impact – if there is such a decoupling.”

He drew parallels to the tariff wars of the 1930s among industrial countries, which contributed to a collapse of global trade and heightened tensions in the years before World War Two.

“The lessons of history are still there. In the last century, we had two world wars, and in between them, the Great Depression. I don’t think anybody should really try to have a repetition of history. These things should never happen again, so people have to act in a responsible way.”

Asked whether he thought the current tensions, which have seen the two sides impose tit-for-tat tariffs on hundreds of billions of dollars of goods, could degenerate into all-out conflict, Cui called the outcome “unimaginable” and that the two countries should do everything to prevent it.

Cui said China did not want to have a trade war and sought a negotiated solution to the current impasse stemming from President Donald Trump’s demands for far-reaching Chinese concessions to correct a massive trade imbalance.

“We believe that the key to a negotiated solution to the trade issues is a balanced approach to the concerns of both sides and honestly, so far I have not seen sufficient response from the U.S. side to our concerns,” Cui said.

“We cannot accept that one side would put forward a number of demands and the other side just has to satisfy all these things.”

He said the two leaders had “a very good working relationship and personal friendship” formed in three previous face-to-face meetings, including two formal summits, and this had been shown by a long phone conversation in early November.

White House insiders say there remain substantial differences within the Trump administration over how far to push China.

This division groups on one side anti-China hardliner and trade adviser Peter Navarro, U.S. Trade Representative Robert Lighthizer and those who favor a complete reevaluation of the relationship.

On the other side are pragmatists led by White House chief economist Larry Kudlow and Treasury Secretary Steven Mnuchin, concerned about the harm deepening friction could do to the U.S. economy and markets.

Kudlow said on Tuesday that Trump is open to a trade deal with China but is prepared to hike tariffs on Chinese imports if there is no breakthrough on longstanding trade irritants during a planned dinner on Saturday in Buenos Aires with Xi.