Politics Trump Rallies for Embattled US Senator in Mississippi
Politics 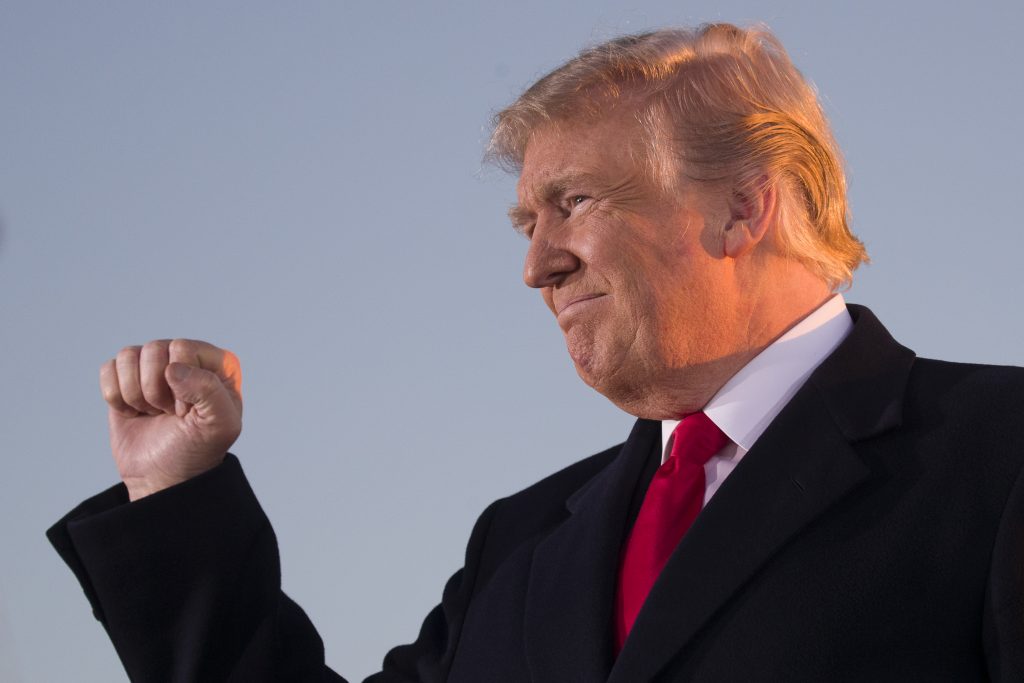 President Donald Trump stumped in Mississippi on Monday for a Republican Senate appointee who wants voters to focus on her unwavering support for him, and not the racial questions that have made Tuesday’s runoff election a much closer contest than anyone expected.

“She votes for us and she votes for ‘Make America Great Again,'” Trump said at a rally in Tupelo, where he was accompanied by Sen. Cindy Hyde-Smith.

“She stood up to the Democrat smear machine,” Trump said, praising her for voting to confirm Brett Kavanaugh to the Supreme Court.

Hyde-Smith told the crowd in Tupelo: “I worked very, very hard for you. I have stood up for you and you know I will continue to stand up for the conservative values of Mississippi.”

She has made the Trump rallies a highlight of her runoff campaign against Democrat Mike Espy, and the president thanked her on Twitter for voting for “our Agenda in the Senate 100% of the time.”

But race has become a dominant issue as Hyde-Smith faces Espy, a former congressman and U.S. agriculture secretary who would become Mississippi’s first black senator since Reconstruction.

Hyde-Smith has drawn fire for a photo showing her wearing a replica hat of a Confederate soldier, and a video showing her praising a supporter by saying, “If he invited me to a public hanging, I’d be on the front row.”

Mississippi has a history of racially motivated lynchings and violence against people who sought voting rights for black citizens. About 38 percent of the state’s residents are black. Espy is trying to boost their turnout and pick up support from white voters who are uneasy with Trump or the racially tinged stories about Hyde-Smith.

Authorities discovered seven nooses and six handwritten signs on Capitol grounds Monday morning. It was not immediately known who put them there.

The signs referred to the state’s history of lynchings and the Senate race, according to photos the state Department of Public Safety posted to social media. One sign said Mississippi needs a senator “who respects the lives of lynch victims.”

Tuesday’s runoff winner will serve the final two years of a term begun by Republican Sen. Thad Cochran, who resigned in April amid health concerns.

It’s the last U.S. Senate race to be decided in 2018 and will determine whether Republicans pad their slim majority.

“If we win tomorrow, we’ll be at 53-47 which is substantially more than we had,” Trump said. He said of Espy, “Oh, he’s far left, he’s out there. How does he fit in in Mississippi?”

Hyde-Smith’s support of Trump is unmistakable. She used both her opening and closing statements of the only debate of the runoff campaign to promote Monday’s presidential rallies, citing the online address to get tickets. Even on trade and tariffs, where Trump’s decisions could hurt Mississippi farmers, Hyde-Smith praised the president.

Hyde-Smith and Trump appeared together at a late Monday afternoon event in Tupelo. Then, they were to fly to the Gulf Coast for a larger evening rally in Biloxi.

During a last-minute campaign stop in suburban Ridgeland on Monday, Espy said he was running his own race and wouldn’t be thrown off by Trump’s appearance. He has emphasized that he’s a moderate seeking the votes of everyone and willing to work across party lines. On Monday, he noted that he had crossed the “party chasm” to endorse the re-election of Republican Gov. Haley Barbour in Mississippi in 2007.

Democrats also have used some star power. Former Vice President Joe Biden endorsed Espy, and three Democrats who could run for president in 2020 — Sens. Kamala Harris of California and Cory Booker of New Jersey and former Massachusetts Gov. Deval Patrick — have been to Mississippi to campaign for the former congressman who served as agriculture secretary in 1993 and 1994 under Democratic President Bill Clinton.

For Espy, turnout is key. He must close the gap in a state where Trump received 58 percent in 2016. Mississippi hasn’t elected a Democrat to the U.S. Senate since 1982.

“I know I can’t win only with black votes,” Espy said Monday. “That’s never been where we are. We’ve got to get votes from everybody. I tell everyone. I need Republicans, I need independents, I need those who have never voted before to come out tomorrow and vote for me.”

Hyde-Smith has apologized to “anyone that was offended” by the hanging comment, saying she meant no ill will. She and her campaign have refused to discuss the Confederate hat and have called the school issue a personal attack on her family meant to draw attention away from issues.

Walmart asked Hyde-Smith to return a $2,000 campaign contribution because of the hanging remark.