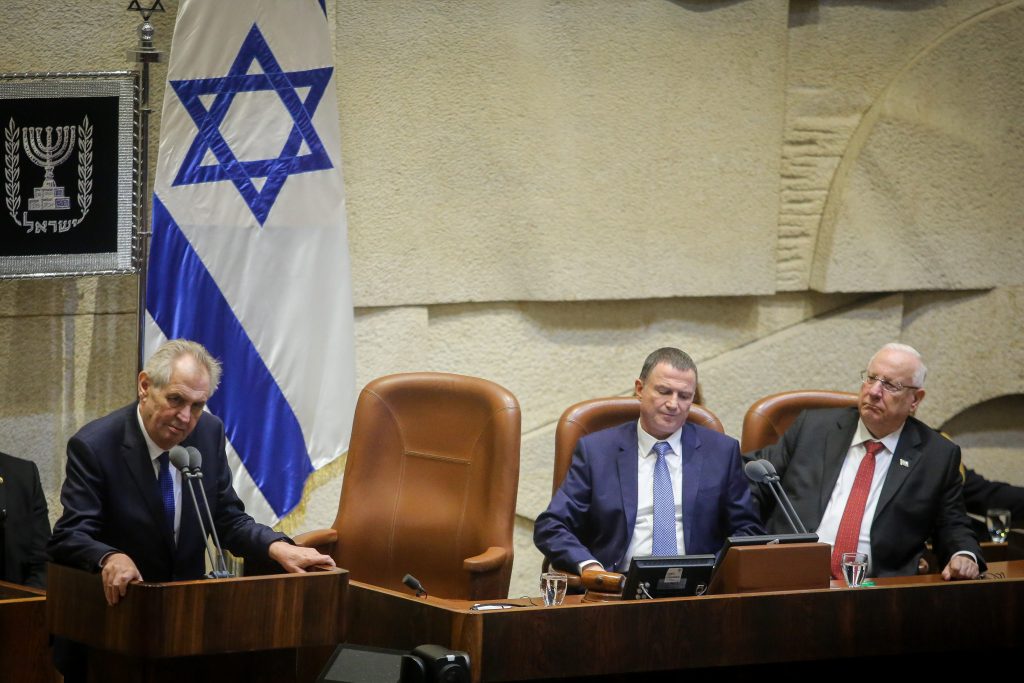 Czech President Miloš Zeman proclaimed his friendship with the state of Israel in a speech at the Knesset on Monday.

“Prime Minister Netanyahu said the Czech Republic is Israel’s best friend in Europe. I wonder, why only Europe?” Zeman quipped in English. “Anyway, I am the best friend of Israel in my whole country.”

Zeman noted the historic Czech support for Israel and the Jewish people, and denounced the European Parliament’s “support for Palestinian terrorists” as shameful.

“If we betray Israel, we betray ourselves,” he said, to applause from MKs.

In a meeting with Israel’s president Reuven Rivlin, The Czech president said that he did not believe in a two-state solution. “I do not see how an independent state can be created in Gaza because Hamas promotes a state of terror,” he said. “Hamas is a terrorist organization, not a state.”

Regarding his desire to move the Czech embassy to Yerushalayim, Zeman candidly admitted that he could make no ironclad promise.

“I am no dictator, unfortunately, but I promise I will do my best,” he said.

He expressed hope that Tuesday’s dedication of a Czech House, promoting Czech-Israel tourism and trade, will pave the way to an embassy move.

PM Netanyahu and Knesset Speaker Yuli Edelstein also praised the country’s support for Israel, including that of its first president Tomasz Masaryk, who opposed anti-Semitism and supported Zionism.

They also thanked the Czech people for their support of Israel’s Independence, including supplying military weapons and providing training for Israeli pilots during that period.

“The Czech Republic and Israel are small but great democracies,” PM Netanyahu said, “Israel raises the torch of freedom. You also sought freedom.”

The Joint List boycotted Zeman’s speech because of his recognition of Yerushalayim as Israel’s capital and his comment earlier in the day about the possibility of a two-state solution.

She said it would lead to prolonged conflict and bloodshed.

“We believe in a state that’s both Jewish and democratic, and therefore we want to separate from the Palestinians, preferably through a Palestinian state,” she said.

However, she welcomed the Czech leader’s visit.

“I represent the opposition, but the relationship with the Czech Republic is important to all citizens of Israel,” she said.

“Your comment at AIPAC, ‘I am a Jew,’ will remain in our hearts, especially coming from a European,” Livni added.