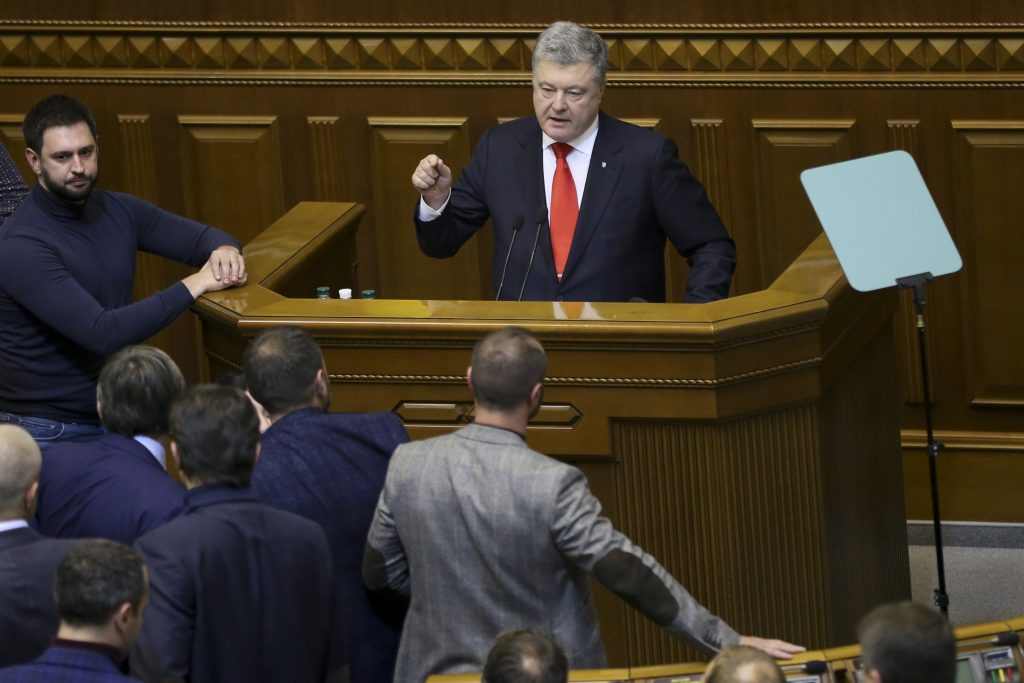 Ukraine’s parliament voted Monday to impose martial law in the country to fight what its president called “growing aggression” from Moscow after a weekend naval confrontation off the disputed Crimean Peninsula in which Russia fired on and seized three Ukrainian vessels amid renewed tensions between the neighbors.

Western leaders and diplomats urged both sides to de-escalate the conflict, and the U.S. blamed Russia for what it called “unlawful conduct” over Sunday’s incident in the Black Sea.

Russia and Ukraine blamed each other in the dispute that further ratcheted up tensions ever since Moscow annexed Crimea in 2014 and threw its weight behind separatists in eastern Ukraine with clandestine support, including troops and weapons.

Ukrainian President Petro Poroshenko asked lawmakers in Kiev to institute martial law, something the country has not done even during the worst of the fighting in the east that killed about 10,000 people.

After a five-hour debate, parliament overwhelmingly approved his proposal, voting to impose martial law for 30 days.

Poroshenko said it was necessary because of intelligence about “a highly serious threat of a ground operation against Ukraine.” He did not elaborate.

“Martial law doesn’t mean declaring a war,” he said. “It is introduced with the sole purpose of boosting Ukraine’s defense in the light of a growing aggression from Russia.”

Ukraine’s Defense Ministry had already announced earlier in the day that its troops were on full combat alert in the country.

The approved measures included a partial mobilization and strengthening the country’s air defense. It also contained vaguely worded steps such as “strengthening” anti-terrorism measures and “information security” that could curtail certain rights and freedoms.

Poroshenko’s critics reacted to his call for martial law with suspicion, wondering why Sunday’s incident merited such a response. Poroshenko’s approval ratings have been plunging, and there were concerns that he would postpone a presidential election scheduled for March.

Just before the parliament met to vote, Poroshenko sought to allay those fears by releasing a statement revising his original martial law proposal from 60 days to just 30 days, in order to “do away with the pretexts for political speculation.”

Oksana Syroid, a deputy speaker of parliament, noted that martial law was not introduced in 2014 or 2015 despite large-scale fighting in the east. A state of emergency “would present a wonderful chance to manipulate the presidential elections,” she said.

NATO Secretary-General Jens Stoltenberg said Poroshenko assured him that martial law would not have a negative impact on the election.

Poroshenko’s call also outraged far-right groups in Ukraine that have advocated severing diplomatic ties with Russia. Hundreds of protesters from the National Corps party waved flares in the snowy streets of Kiev outside parliament and accused the president of using martial law to his own ends.

But Poroshenko insisted it was necessary because what happened in the Kerch Strait between Crimea and the Russian mainland “was no accident,” adding that “this was not the culmination of it yet.”

Russian coast guard ships fired on the Ukrainian navy vessels near the strait, which separates the Black Sea from the Sea of Azov, injuring six Ukrainian seamen and eventually seizing the vessels and their crews. It was the first open military confrontation between the two neighbors since the annexation of Crimea.

Ukraine said its vessels were heading to the Sea of Azov in line with international maritime rules, while Russia charged that they had failed to obtain permission to pass through the narrow strait that is spanned by a 12-mile bridge that Russia completed this year.

While a 2003 treaty designates the Kerch Strait and Sea of Azov as shared territorial waters, Russia has sought to assert greater control over the passage since the annexation.

Ukrainian Foreign Minister Pavlo Klimkin tweeted that the dispute was not an accident and that Russia had engaged in “deliberately planned hostilities,” while Russian Foreign Minister Sergey Lavrov blamed Kiev for what he described as a “provocation,” adding that “Ukraine had undoubtedly hoped to get additional benefits from the situation, expecting the U.S. and Europe to blindly take the provocateurs’ side.”

Klimkin told reporters in Kiev that the government is in talks with the Red Cross to make sure the captive seamen are treated as prisoners of war. Kremlin spokesman Dmitry Peskov did not say whether the Kremlin considers them prisoners of war.

At a U.N. Security Council meeting, U.S. Ambassador Nikki Haley urged Russia to “immediately cease its unlawful conduct” in the Black Sea. Anne Gueguen, the French deputy permanent representative at the U.N., urged the release of the sailors and the vessels.

The European Union and NATO called for restraint from both sides. NATO said Stoltenberg expressed the U.S.-led military alliance’s “full support for Ukraine’s territorial integrity and sovereignty, including its full navigational rights in its territorial waters under international law.”

German Chancellor Angela Merkel also spoke by telephone with Poroshenko to express her concerns and emphasize the need for de-escalation and dialogue, her office said.