World In South China Sea, a Display of U.S. Navy Strength — And a Message to Beijing
World 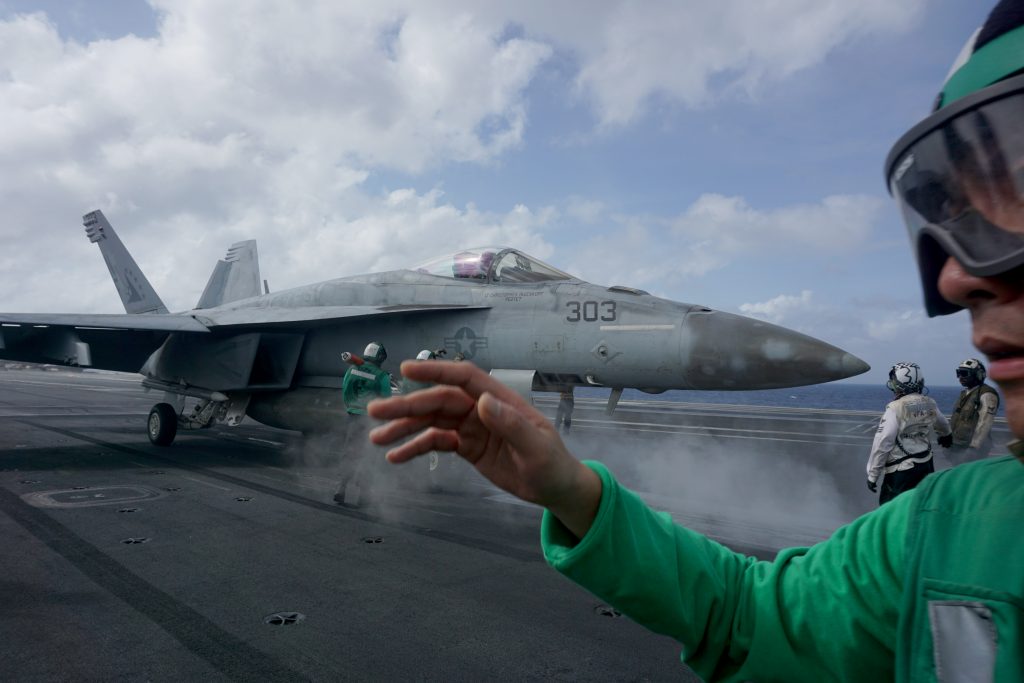 As fighter jets roared off the flight deck and darted above the South China Sea, visitors onboard the carrier USS Ronald Reagan raised their phones for the inevitable selfies.

Among those clicking souvenir images was a lieutenant-general from the Chinese People’s Liberation Army, who was part of a VIP guest list as the carrier moved through contested waters.

The carrier — which docked last week in Hong Kong in a good-faith gesture from Beijing — also offered a snapshot into challenges for the Pentagon in the Asia-Pacific, as China builds up its own naval prowess and ramps up efforts to solidify territorial demands.

The United States seeks to keep its place as the dominant naval power across East Asia, where Washington and its allies believe that Beijing is trying to reorder international rules and military alliances in place since World War II.

But Washington also has to contend with China’s fast-growing military reach. That includes investments to its navy and missile systems to directly counter American military might.

China has built a range of artificial structures and begun to militarize them. Western military analysts say China is now able to possibly position missiles that could potentially destroy American aircraft carriers and other warships.

China claims it has historic rights to these waters, a crucial waterway where one third of global trade flows.

The United States and its allies, meanwhile, view the South China Sea as a vital international maritime corridor. Nations bordering the sea, including the Philippines, look to the U.S. Navy to help defend their access.

The United States has historical alliances in the Pacific that offer some advantage. But the Belt and Road Initiative — a grand plan of investment and construction across Asia and beyond — is widely seen as a way to chip away at the U.S. bonds in the region by trading economic favors for influence.

Trade issues are expected to dominate planned talks later this week between President Donald Trump and Chinese President Xi Jinping on the sidelines of a summit of Group of 20 industrialized nations in Buenos Aires later this week.

But military concerns, including China’s expansion into the South China Sea, have raised alarm in Washington. Speaking at a regional summit in Singapore this month, Vice President Mike Pence said these seas do not “belong to any one nation” and reaffirmed American military commitment to the region — but analysts say this is getting harder to do as China builds up its own arsenal.

“There’s a need for the U.S. to recognize that China’s growing diversity and range of missiles is going to complicate anything we seek to do in any contingency, be it in the South China Sea, or with Taiwan or North Korea,” said Derek Grossman, a senior defense analyst who specializes in the Indo-Pacific at the Rand Corp.

A recent Rand study found the Chinese navy over the past two decades caught up to the United States by modernizing “extraordinarily quickly by any reasonable historical standard.”

“In basically every category, China has narrowed the gap (with the U.S.) significantly,” Grossman added.

A bipartisan committee created by Congress also concluded in a report that the United States has lost its military edge and could lose in a potential war with Russia or China.

In a speech Nov. 17, Adm. Phil Davidson, commander of the U.S. Indo-Pacific Command, identified China as perhaps the greatest challenge to the “long-term stability” of the region. He singled out Beijing’s infrastructure building across Asia as “insidious” debt-trap diplomacy and accusing China of intimidating countries in the region by militarizing these seas.

China, he added, has built a “Great Wall of SAMs” — surface-to-air missiles — that has the “potential to exert national control over international waters and airspace.”

These have been built on a series of artificial islands China has constructed in the South China Sea, where the Philippines, Vietnam and others also have claims of sovereignty, backed by international law.

China has rejected a 2016 ruling by an international court that invalidates its claims to the sea. At the same time, Beijing has long objected to this heavy American military presence in these waters.

As the Reagan and another aircraft carrier were conducting drills in off the coast of the Philippines last week, a spokeswoman for the Chinese foreign ministry said pointedly that military actions under the “pretext freedom of navigation” undermines the sovereignty of countries around the South China Sea.

“We have asked the U.S. side or those claiming that there are problems with the freedom of navigation in the South China Sea many times to produce a single piece of evidence to prove which ship or plane from which country has encountered problems,” Chinese foreign ministry spokeswoman Hua Chunying said on Nov. 16. “However, up to now, no one can give us a clear-cut answer.”

Aside from land missiles, China is developing its own aircraft carriers — a move directly aimed at competing with the United States, which has 11.

But it has a long way to go. The one Chinese aircraft carrier in service, the Liaoning, is currently under maintenance. A second is currently conducting trials, and a third is in the pipeline.

“We have been operating aircraft carriers for an awful long time; we’re pretty good at it,” Rear Adm. Karl O. Thomas, commander of the Reagan strike group, said in an interview.

“It will take (the Chinese) some time to get there,” he added.

“The U.S. Navy carrier has been a result of decades of experience, it is a gap that China can’t necessarily bridge within a short span of time and hone it to a level comparable to the U.S.,” he said.

The Chinese navy, he adds, has had no combat experience for three decades, and technology like their anti-ship ballistic missiles have not been tested.

The Chinese lieutenant general invited on board, Tan Benhong, the commander of the PLA garrison in Hong Kong, had an amicable exchange with his counterparts.

“We had a great meeting with them when they came on board,” said Thomas. “We have the opportunity to show our contemporaries how we operate our aircraft carrier.”

But just last month, a Chinese warship came just 45 yards within a U.S. destroyer as it sailed the Chinese-claimed Spratly Islands in the South China Sea, almost causing a collision.

“There are long-standing differences that China and the U.S. have on military activities in each other’s waters,” said Koh, who describes them as “structural.”

“I think it is quite clear that they aren’t able to resolve this in the coming time.”