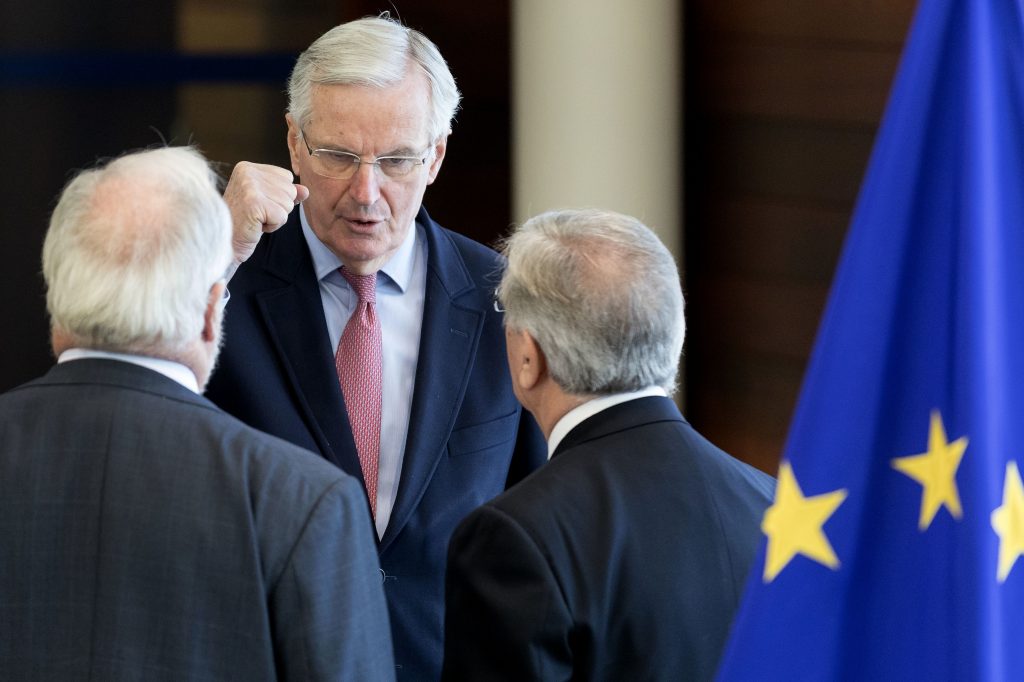 British Prime Minister Theresa May said Thursday that a good Brexit deal is within reach, after the European Union and her government agreed on a draft declaration outlining their future relations.

The 26-page text was agreed upon at a technical level by negotiators and endorsed Thursday by the European Commission, the EU’s executive arm, which is overseeing Brexit negotiations.

It paves the way for a weekend EU summit to rubber-stamp the deal.

“This is the right deal for the U.K.,” May said outside her Downing Street offices. “It delivers on the vote of the referendum. It brings back control of our borders, our money and our laws and it does so while protecting jobs, protecting our security and protecting the integrity of the United Kingdom.”

She said that British citizens “want a good deal that sets us on course for a brighter future. That deal is within our grasp and I am determined to deliver it.”

In a tweet earlier Thursday, EU Council President Donald Tusk — who is set to chair Sunday’s summit — confirmed that a draft political declaration on future ties “has been agreed at negotiators’ level and agreed in principle at political level.”

Tusk said he sent the draft to Britain’s 27 European partners and that it still requires “the endorsement of the leaders.”

EU heads of state and government are due to meet in Brussels on Sunday to approve the declaration and a separate divorce deal. May is set to return to Brussels on Saturday for more talks on the eve of the summit, including with Commission President Jean-Claude Juncker.

Representatives from all 28 EU countries are due to meet Friday to prepare for the summit, which is seen as a pivotal moment in the Brexit process.

May is facing widespread opposition in the British Parliament over the divorce agreement, which was agreed last week. That 585-page legal treaty deals with the terms of Britain’s departure, including what the country owes the EU.

Britain officially leaves the EU — the first country ever to do so — on March 29, 2019, but a withdrawal agreement needs to be sealed soon to leave enough time for the European Parliament and the U.K. Parliament to endorse it.

As opposed to the withdrawal agreement, the draft declaration on future ties is a political, not a legal, text.

“This declaration establishes the parameters of an ambitious, broad, deep and flexible partnership across trade and economic cooperation, law enforcement and criminal justice, foreign policy, security and defense and wider areas of cooperation,” according to the document.

It also talks about the close ties that have been cemented after 45 years of Britain’s membership of the EU as well as “the sizes of the two economies and their geographic proximity, which have led to complex and integrated supply chains.”

It notes that the “parties envisage having a trading relationship on goods that is as close as possible, with a view to facilitating the ease of legitimate trade.”

The actual legal text will have to be negotiated after Brexit on March 29, and that could well be even more complicated than what has come so far.

In a speech in Berlin before Tusk’s announcement, German Chancellor Angela Merkel underlined that “Britain should remain a partner, remain a friend.”

Though Britain “should have very close economic relations with us,” Merkel did underscore the difficulties that may arise in any attempt to keep services seamless.

“We have to say honestly that, in the services sector, we don’t have a great deal of experience with international free trade agreements,” she said. “But we want to see that as a future relationship.”

The European Commission, which has supervised Brexit negotiations, refused to comment directly on the declaration.

But spokesman Margaritis Schinas did confirm that “work is continuing” to resolve differences between London and Madrid over Gibraltar, the tiny territory at the tip of the Iberian Peninsula that was ceded to Britain in 1713 but is still claimed by Spain.

May said Thursday that she has spoken with Sanchez and that she is “confident” there will be a resolution on Sunday “that delivers for the whole U.K. family, including Gibraltar.”

May was due to address lawmakers Thursday and also held talks with Austrian Chancellor Sebastian Kurz, whose country holds the rotating EU presidency until the end of the year.