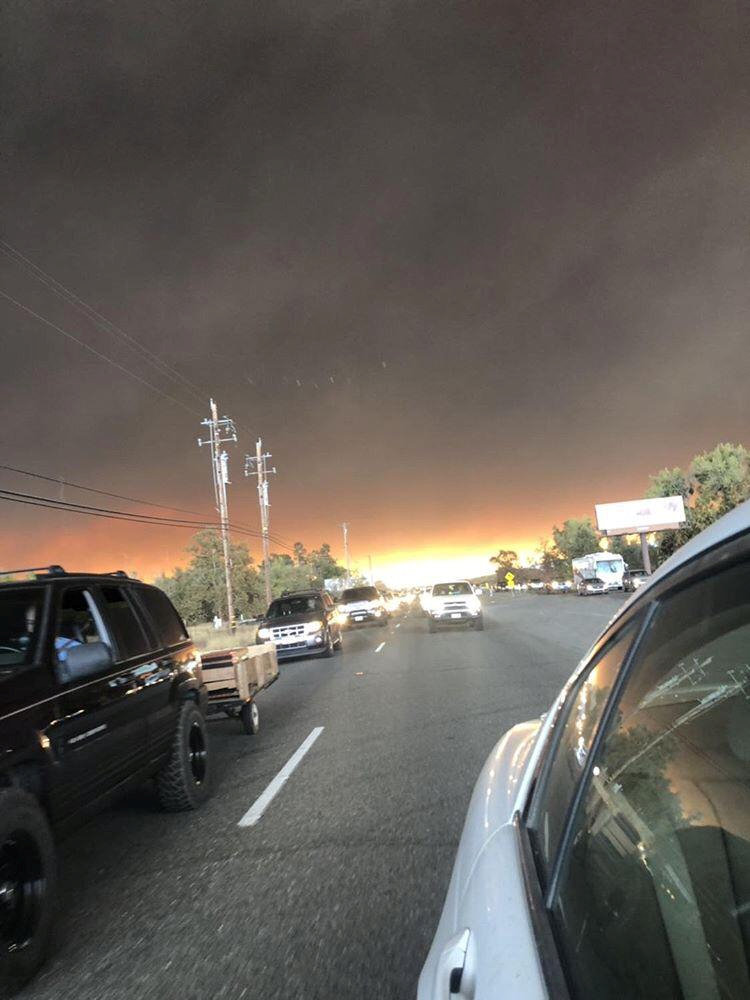 After a fast-moving fire swept into town a decade ago, burning more than 200 homes and trapping thousands of fleeing residents on gridlocked mountain roads, a grand jury called on officials to improve evacuation routes.

But six years later, the city decided to narrow a portion of the main road through town from four lanes to two as part of an effort in the downtown area aimed at boosting commerce as well as traffic and pedestrian safety.

Two other roads in the city were also narrowed, records show.

The so-called Skyway “road diet” slowed traffic, and a local civic group donated benches and landscaping to beautify the zone.

Nearly two weeks ago, Skyway was the scene of unspeakable horror when the worst wildfire in California history besieged Paradise. Up to 27,000 residents trying to escape the flames instead were stuck in traffic, the buildings around them burning. Some died in their cars when the fire roared over them.

The destruction — at least 81 people dead and nearly 700 missing — has placed intense scrutiny on the efforts to evacuate residents and raised questions about whether there was more that could have been done to get people out.

It’s far from clear whether the narrowing of Skyway — the largest of just four routes out of the foothill town — worsened the chaotic delays in getting out.

Mayor Jody Jones said Tuesday that the evacuation of Paradise, begun at 7:46 a.m., Nov. 8, was complete by 3 p.m. Residents who arrived at a shelter in Oroville said the 16-mile exodus took 21/2 hours, better than the three-hour evacuation in 2008 that sparked the Butte County Grand Jury’s investigation.

“I don’t believe that it really mattered,” Jones said of the changes made on Skyway. “I don’t think there’s any town in the world prepared with a roadway infrastructure that could evacuate their entire town all at once. They’re just not built to do that.”

Paradise received state funding to put other evacuation routes on “road diets,” California Department of Transportation records show. Travel lanes were reduced and bike lanes added to Pearson Road, a major cross street that became jammed during the fire evacuation. Travel lanes were reduced to make room for turn lanes on Clark Road, one of the four roads out of town.

But Paradise also received $1.2 million to add raised rumble strips on its main arteries, improve drainage, widen shoulders and upgrade traffic signals to improve safety, including battery backups to keep the systems running if the power went out.

The decision to narrow Skyway came amid safety and business concerns from residents. Some criticized it as an “expressway,” sending speeding traffic through the small downtown, depriving merchants, and imperiling any who tried to walk across. Traffic engineers told the city, “This situation has limited the town’s ability to realize its potential as a center of commercial and cultural activity.”

A Bay Area engineer drew plans to slow the road with concrete curbs that cut into the Skyway’s outer lanes, restricting it in large portions of the downtown stretch to two lanes — one in either direction — with a third center turn lane.

He warned only against a raised median. At least three lanes would be needed for evacuation route in case of fire.

“We did do a project to make it safer for pedestrians,” Jones said. “People were being killed just walking across the street.”

The narrowed section of Skyway, between Elliott and Pearson roads, runs along a stretch of gas stations, antique shops and real estate offices.

To make it more friendly to shoppers, six sets of curb cutouts encroach on two lanes once dedicated to traffic. The pedestrian-friendly curbs, called “bulbouts” by the engineer who drew up the Skyway project plans, are used commonly, including in Los Angeles.

A large portion of Paradise lies north of that downtown restriction, and residents would have had to pass through the traffic “calming” to escape the Nov. 8 fire. In the first hours of the evacuation, city police converted all lanes to outbound traffic to increase its capacity.

Among those helping direct fire evacuation traffic in that gridlock was Butte County Sheriff Kory Honea.

“There were thousands and thousands of cars coming down,” Honea said. “The gusts of wind that were coming your way, the smoke and the debris. I got there like 7 or 8 (a.m.), and it’s pitch black, its like the middle of the night. Ash and embers are raining down upon you and you’re trying to get people going.”

Honea said officers tried to direct the chaos, using radios to try to identify the blockages. “I realize how chaotic and scary that was … but you didn’t have people honking or trying to go around or push through. When we had a road block we would try to call ahead and say, what’s the problem? How do we fix it?”

Street images by Google show a much wider road in 2008. But it still became gridlocked and impassable when wildfire that year came close to Paradise. The 2009 Butte County Grand Jury noted the area is “especially prone to disastrous wildfires” and concluded “additional evacuation routes are necessary.”

City officials said they have worked to make improvements, including adopting protocols to convert two-way streets into one-way evacuation routes during times of crisis. And 70 people participated in a recent drill, rehearsing an evacuation down the town’s main thoroughfare at rush hour.

A forest road north out of Paradise was paved, providing what Butte County officials said would be an escape route for those living higher up the ridge. And local officials secured state grants to remove vegetation north of Paradise, to reduce fire risk.

Because of the evacuation problems in 2008, officials this time decided not to immediately undergo a full-scale evacuation, hoping to get residents out of neighborhoods closest to the fires first before the roads became gridlocked.

Emergency officials tried to stick with the plan, but the fire spread too quickly. Roads were blocked even before the evacuation order went out to additional neighborhoods.

On Tuesday afternoon, the narrow portion of Skyway was hard to miss.

A line of fire engines and utility trucks backed up along the roadway as crews headed home before sunset.