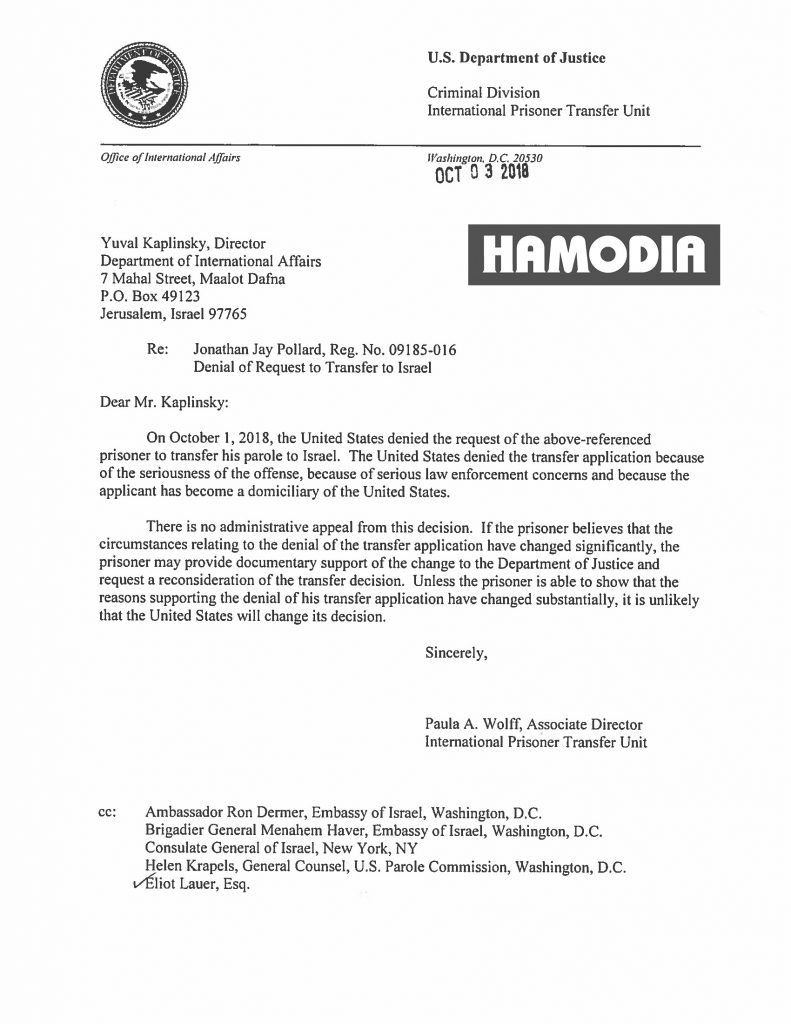 The U.S. Justice Department has rejected a request to allow Jonathan Pollard to serve the remainder of his parole in Israel, sources close to Mr. Pollard confirmed to Hamodia on Wednesday. The refusal of the request, which was made by Mr. Pollard’s attorney on his behalf in close coordination with the Israeli government, is only the latest chapter in a decades-long saga that has been widely described as travesty of justice.

Rabbi Pesach Lerner, executive vice president emeritus of the National Council of Young Israel and president of the Coalition of Jewish Values (CJV), who has ceaselessly championed Mr. Pollard’s cause for more than two decades, says he was very disappointed to learn of the refusal, but not shocked.

“Israeli Prime Minister Benyamin Netanyahu personally raised the issue of the transfer request during an official visit to the White House last March, and we were very hopeful that it would be approved,” Rabbi Lerner told Hamodia in an exclusive conversation on Wednesday. “But I can’t say that I was shocked. The Justice Department is still heavily staffed by Obama appointees, and they were the ones who made this decision.”

The denial of the request was made on October 1, but first became public on Wednesday.

Under a treaty between the U.S. and Israel, individuals serving a sentence in one country may request to serve the remainder of the sentence in their home country. If approved, the receiving country assumes responsibility for administering the transferred sentence. Mr. Pollard, who was released from prison in November 2015 after serving an unprecedented 30 years for passing classified information to an ally, Israel, is still languishing from broad and severe parole restrictions. These include wearing an oppressive GPS monitoring system, and a “curfew” that puts him under house arrest between 7:00 p.m. and 7:00 a.m. During the daytime, he is only permitted to travel in parts of Manhattan, and is even prohibited from visiting nearby Brooklyn. The restrictions also include the unfettered monitoring and inspection of his computers, as well as those of any employer who chooses to hire him, which has prevented him from being able to gain employment.

In the letter to the Israeli government explaining the decision, obtained exclusively by Hamodia, the Justice Department cited the “seriousness of the offense” and “serious law enforcement concerns.”

Mr. Pollard was arrested in 1985 and sentenced in 1987. At that time, a “life” sentence in the United States was defined as 45 years or more. He was released on parole in 2015, after serving two-thirds of his sentence. While the government has referenced a five-year limit to his current restrictions, Rabbi Lerner emphasized that this is only a “presumptive” date.

“All this means is that after five years they will do a review of his case. At that time, the same people who argued for the current punitive parole restrictions will be asked again for their opinion as to whether the parole and its restrictions should be continued. Since the original ‘life’ sentence won’t end until November 2030, these officials could very well ask for any number of additional years, up to another decade, to be imposed at that time,” Rabbi Lerner said.

“There is every indication that the same excuses that were used in the denial of Jonathan’s treaty-transfer request will be used again at the five-year mark to justify not only the continuation of the parole but also the continuation of its draconian restrictions.”

Rabbi Lerner pointed out that after he was released from prison, Mr. Pollard’s attorneys went to court to fight the parole restrictions.

“The government never provided any evidence as to what [classified details], exactly, Pollard allegedly remembered after 30 years in prison. The court simply accepted at face value the government’s vague generalizations about what it was that concerned them. It is obvious that the Justice Department – of which the Parole Commission is a part – feels that it must refuse the treaty request in order to justify its allegations made against Pollard three years ago, when it argued that the information he supposedly retained could do irreparable harm to American national security if divulged to Israel,” Rabbi Lerner said.

“The frightening part is that in order to defend the credibility of its original allegations, the government will likely feel obligated to maintain the myth of his posing an ongoing threat to U.S. security two years later, or else they would look like idiots. After all, if the information he supposedly retained when he left prison suddenly lost its value five years later, exactly how damaging was it in the first place? In order to be spared the embarrassing need to defend this question, the government will simply repeat what it said in the denial of the treaty-transfer request and argue for an extension of his parole – which would extend his parole and restrictions and limitations of where he can go, by ten years, until he finishes the full 45-year sentence.

“President Trump may well be a friend of Israel and the local Jewish community, but he hasn’t managed to clear out the anti-Israel and perhaps anti-Semitic so-called professionals in the Justice Department and various intelligence agencies left over from the Obama administration. The continuing mistreatment of Jonathan Pollard is clear evidence of this.”