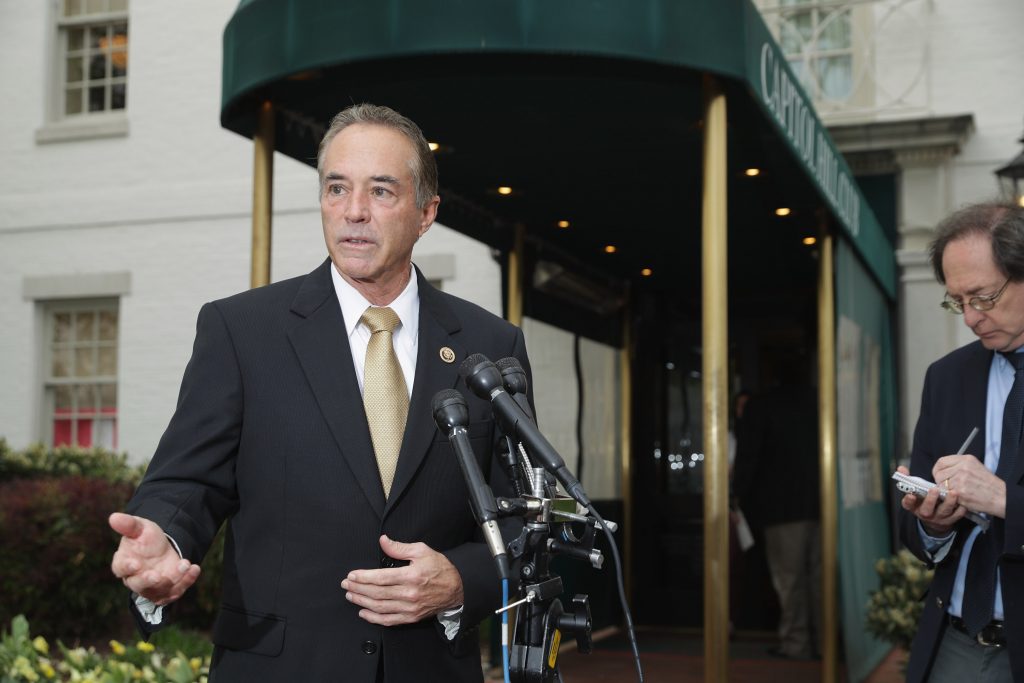 Rep. Chris Collins, R-N.Y., under indictment on insider-trading charges, declared victory Tuesday night in his bid to hold onto his Buffalo-area district.

“Congressman Collins has already returned to work and looks forward to continuing to do the work of the people of the 27th District,” Collins campaign spokeswoman Natalie Baldassarre said in a statement.

After a long day of tabulations at the Board of Elections in the district, officials indicated Democratic challenger Nate McMurray had not gained enough absentee ballots to outpace the incumbent.

McMurray garnered 3,279 absentee and emergency votes, while Collins garnered 2,422, according to the Buffalo News. But that margin was not wide enough to overtake the lead Collins had secured on Election Day.

All told, it appears Collins maintained his seat in the conservative district by just 1,384 votes, according to the paper.

“Congressman Collins will be re-elected,” Republican Erie County Board of Elections Commissioner Ralph M. Mohr told reporters, saying it would be “mathematically improbable” for McMurray to outpace Collins at this point.

The congressman’s apparent win comes despite an August indictment on felony insider-trading charges stemming from a bad investment in a small Australian biotech company. Federal prosecutors say Collins leaked sensitive information about a failed clinical trial to his son, another investor, days before the company’s stocked plunged to nearly zero.

The Associated Press and other news outlets have not yet called the race. The contest is one of three that are still too close to call two weeks after Election Day, after the AP called the race for the 4th District in Utah for challenger Ben McAdams over Republican Rep. Mia Love.

McMurray has not conceded. The town supervisor promised “more news soon” in a tweet Wednesday morning, and buoyed his supporters with some sass.

“Enough condolences, guys. Cheer up! You’d think I was indicted and going to jail or something,” he wrote.

Election officials stressed the historic nature of the race.

“This is about as close a congressional race as any of us can remember,” Democratic Erie County Board of Elections Commissioner Jeremy Zellner told Spectrum News in Buffalo.

Collins will make history in another way when he faces trial in February 2020. Congressional ethics experts say they believe the Collins case represents the first time a sitting member of Congress has been prosecuted for insider trading.