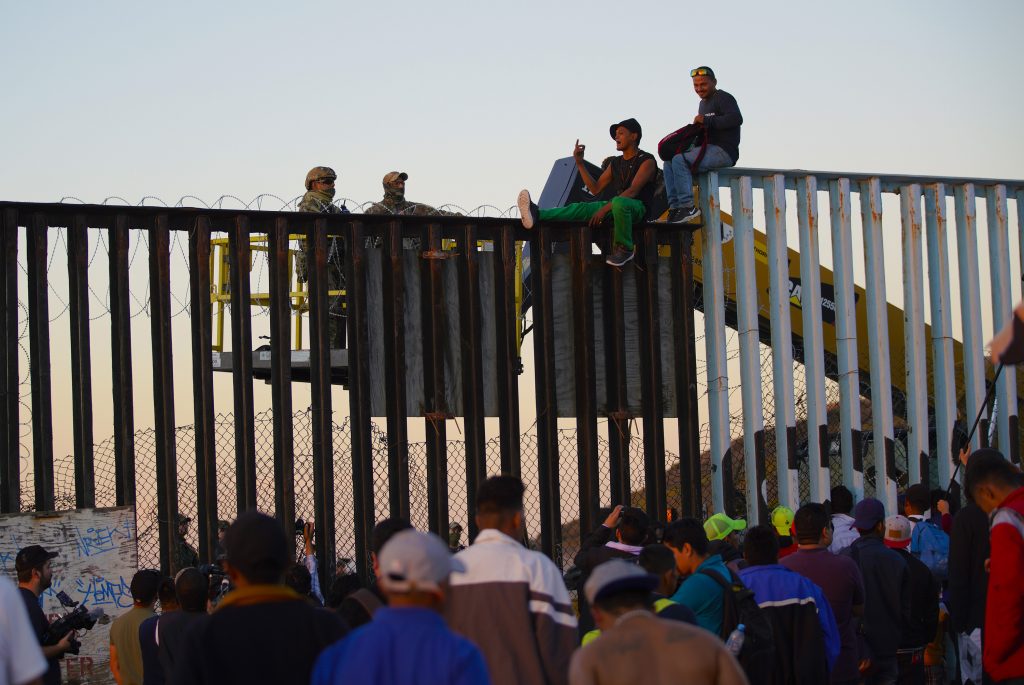 Nearly 6,000 U.S. troops rushed to the border with Mexico shortly before the midterm election could begin withdrawing this week, but Trump administration officials, worried about curtailing the mission too quickly, are delaying their departure.

The officials believe the active-duty troops may be needed to assist Border Patrol agents as caravans of migrants from Central America approach the border in an effort to seek asylum in the United States, a defense official said.

U.S. officials are discussing whether to grant troops authority to protect Border Patrol personnel in case they face violence from the migrants, according to CNN. The use of force would have to be “proportional” to the threat.

Troops along the border are currently barred from using force except for self-protection.

A decision to permit troops to provide security to the Border Patrol would represent a significant expansion of their mission.

It could also raise questions about whether the mission is in compliance with a U.S. law that prohibits active troops from engaging in domestic law enforcement functions.

The Pentagon had rejected a similar proposal in internal deliberations before the troops were originally deployed in late October, according to the official, who spoke about the deliberations in return for anonymity.

The first troops to be withdrawn are likely to be engineering units that have largely finished installing razor wire and building obstacles at border crossing points.

Pentagon officials previously have said that the orders sending troops to the border specified they were authorized until Dec. 15, unless the Department of Homeland Security requested an extension.

If an extension is approved, officials said, the goal is to have all the troops home by the end of the year.

The push to begin sending some home more quickly, first reported by Politico, comes from commanders who say there is no reason to keep the troops away from their families at Thanksgiving after their assigned mission has been accomplished.

Trump officials may fear that starting the withdrawal will intensify criticism that the deployment was politically motivated rather than a necessary use of military troops. Some lawmakers are vowing to open a congressional investigation of the operation when Democrats take control of the House in January.

President Trump ordered the deployment days before the November 6 midterm election in response to what he repeatedly warned was a looming “invasion” of migrants moving north through Mexico in a caravan.

Roughly 5,900 active duty troops were deployed along the border in California, Texas, and Arizona, making it one of the largest such deployments in decades. Most are unarmed and restricted from interacting with migrants.

Trump said at one point that as many as 15,000 troops might be needed to secure the border.

But critics said the president was politicizing the military and exaggerating the threat to rile up his supporters for political gain. Trump has largely ceased talking about the caravans since the election.

Hundreds of migrants have arrived in recent days in Tijuana. Reports of a possible attempt by some to rush illegally through the San Ysidro Port of Entry prompted the temporary suspension of operations there early Monday, officials said.

A withdrawal of troops this month probably would mean that they would leave before some of the migrant caravans have even arrived at the border.

In addition to engineering units, the Pentagon sent military police, logistics, and helicopter units, along with a small number of infantry, public affairs and other types of military specialists.

In a visit last Wednesday to the Texas border town of Donna, Defense Secretary James N. Mattis said that troops would be finished installing barriers and other initial tasks within a week to 10 days, although he said additional requests for help from the Department of Homeland Security were expected.