Target Sales Up 5 Percent in 3Q, But Earnings Miss Forecast 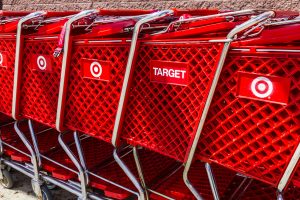 Target Corp. reported strong sales growth in the third quarter both in stores and online, and said it saw gains in all of its major sales categories. But earnings per share were lower than forecast, as the Minneapolis-based company has invested in its stores and back-room operations to enable it to improve shipping times, delivery options and fast in-store pick-up times. The company’s shares fell sharply on the news.

Adjusted earnings per share were $1.09 on sales of $17.82 billion, on the quarter that ended November 3. Analysts had expected the company to hit $1.12 and sales of $17.8 billion as consumer confidence is hitting its highest levels in a decade.

With consumers expecting instant gratification and convenience at a low price, Target began offering free, two-day delivery in November and will continue through the year-end shopping season, a move that forced competitors Walmart and Amazon to follow.

The company is into the final stage of a $7 billion, three-year plan to overhaul its stores and online operations where it has turned stores into order-fulfillment centers to speed up delivery and to reduce shipping costs.

Target expects fourth-quarter sales to rise 5 percent compared to last year, about in line with its third-quarter pace. It projected annual earnings per share to range from $5.30 to $5.50. The company is off its best quarter in 13 years.

“We plan to leverage our current momentum into 2019 when we’ll achieve greater scale across the full slate of our initiatives,” Target CEO Brian Cornell said in a statement.