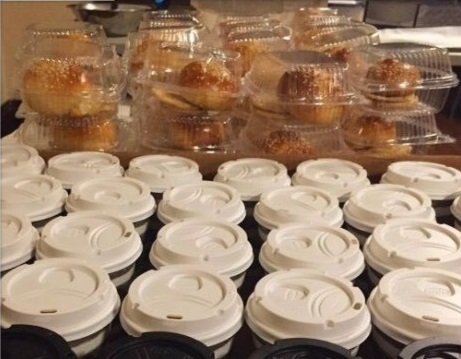 As wildfires continue to burn in northern California’s Butte County, large swaths of the area known for its rugged beauty have been transformed into a scorched and dangerous wasteland. The Camp Fire, so named after the road on which it began, has destroyed thousands of homes and its death toll continues to rise, with hundreds still unaccounted for.

One of the many who has been at the front lines of those trying to aid those displaced by the miles-wide blaze has been Rabbi Mendy Zwiebel, Director of Chabad of Chico — the region’s largest city.

“It has been total chaos” Rabbi Zwiebel told Hamodia. “We have thousands of people who all of a sudden lost everything.”

Chico narrowly escaped being evacuated, and has been saved from the fire itself, but, as it is located only a 15-minute drive from Paradise — a town that has been largely destroyed — large numbers of displaced residents have taken refuge in the small city.

Over the last ten days, the Zwiebels have hosted several families left homeless and largely bereft of their worldly possessions, and have been doing all they can to help people through a most difficult period.

“We’ve had a few people staying with us while they try to put their lives back together,” he said. “We are also preparing hot meals and providing emotional support for people we know who have lost their homes and are basing themselves out of Chico for the time being.”

Additionally, Rabbi Zwiebel has launched a fundraising effort to help support families through the present challenges they face. Many who have insurance may not see payments for some time, and several others did not have policies to cover their losses.

Butte County is home to many Jews, although the vast majority of them are unaffiliated. From those who have built up a connection with Chico’s Chabad house, the area’s only Orthodox institution, some 20 had lost their homes in the Camp Fire.

Even as Chico remained a safe haven for many, it has been beset by smoke that — for one day last week — gained it the inglorious distinction of having the world’s worst air quality. The air has been poisoned not only by smoke from burnt forests but from the fumes of the many buildings, fuel tanks and other items that went up in flames. Elderly people and children have been advised to remain indoors, and most others only venture into the streets with surgical-type face masks to filter the smoke-filled air.

Poor air quality was not only a challenge for those in Butte County, but winds have carried smoke and fumes nearly 200 miles south to the San Francisco Bay area. There too, far from the actual fires, the very act of breathing outdoors is not easily done.

“It’s been terrible for the last 10 days,” Jeff Morgan, co-owner of Covenant Winery, based in Berkeley. “It’s hard to believe that we’re so far away but the smoke settled over the bay, and it’s making it hard to breathe or work or do too much.”

There too, most people have become accustomed to venturing out only with face masks, finding the streets filled with what appears to be thick fog.

“In addition to being really annoying, we are all getting upper respiratory infections and coming down with colds. I have one,” said Mr. Morgan.

While it might complicate some of the rescue efforts, hopes were high that rain, predicted for the middle of the week, would extinguish the remaining fires and settle the pervasive smoke.

Mr. Morgan said that increasingly destructive fires have become a regular occurrence and an unwelcome aspect of life in many parts of California.

“We started the season with what was the biggest fire in California history and now we have a bigger one. It seems we are being beset by bigger and bigger ones every year, most likely due to climate changes,” he said.