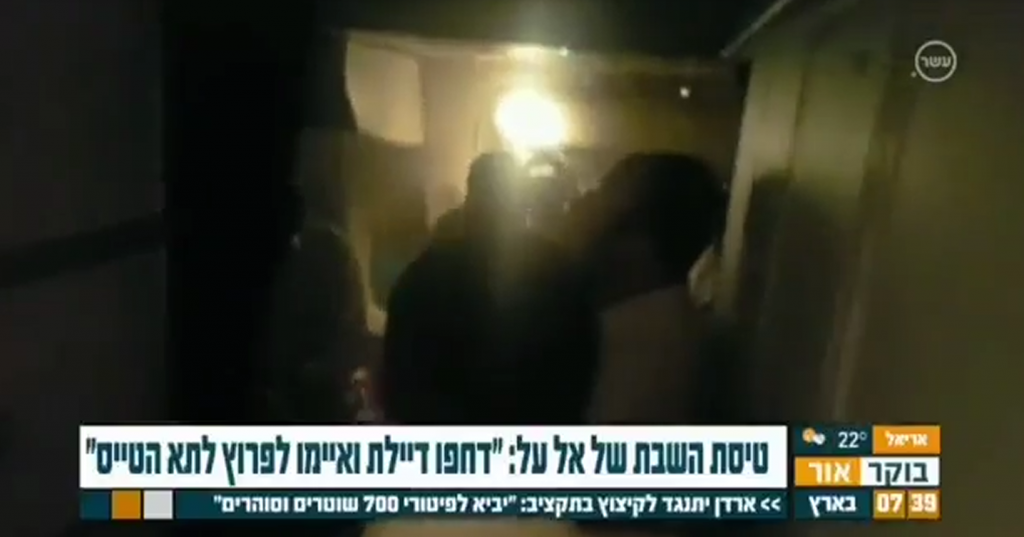 Two passengers had written on social media that religious passengers shouted, and acted violently toward, the flight crew. This version of the events that transpired on the flight was publicized by El Al and reported in Israeli secular media. But after Shabbos, other passengers – including a prominent journalist and a former MK – denied this version of the story, as a coverup for what they allege was dishonesty and misconduct by the crew. They say that there was shouting by passengers of all religious stripes, but no violence at all. Moreover, they say that the captain and crew attempted to deceive them throughout the flight, and that the delay in takeoff  – which ultimately forced the flight to land in Athens before Shabbos – was caused by El Al’s flight crew having arrived at the airport hours late for the flight.

Roni Meital, one of the passengers who alleged violence by religious passengers against the flight crew, posted a video in which voices can be heard shouting, but in the darkened cabin, it is difficult to ascertain the sources of the shouting. Yehuda Schlesinger, a journalist for Israel Hayom who was a passenger on the flight and strongly denounced the version of the flight promoted by Meital and El Al, posted his own video taken on the plane, in which chareidim can be seen clapping and singing Shabbos songs.

In a statement released to Israeli media following criticisms of the doctored video, Channel 10 said, “We regret that there was a technical error in editing the video clip,” and that it will apologize on the Tuesday morning show.

Channel 10 also said that “the video was but a short clip of a longer segment, which attempted to report and respect all sides” of the story.