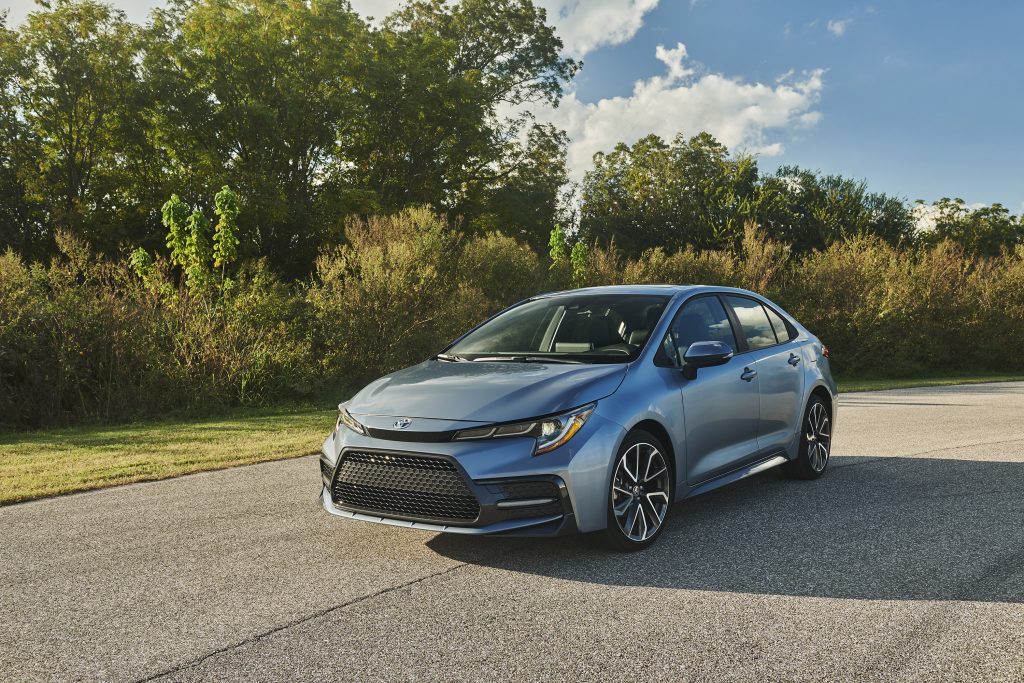 Proving that Toyota executives are committed to injecting their automotive appliances with a vitality that goes beyond dependability, America’s favorite Japanese automaker unveiled the 2020 Toyota Corolla sedan Thursday. Like the five-door 2019 Corolla Hatchback that debuted in March, the four-door is built using Toyota’s New Global Architecture and is styled to banish any memories of its benignly inoffensive predecessors that delivered the emotional fulfillment of a dishwasher.

Its stylish new look benefits from a front overhang that has been reduced 1.3 inches, and rear overhang that has grown by more than half an inch, helping alleviate the front-heavy look typical of front-wheel-drive vehicles. The Corolla’s shape remains familiar, but was massaged to appear lower and leaner, with gently flared fenders and anchored by dynamically styled LED headlamps; adaptive front lighting is optional. Its face has been updated to still appear energetic, but with a cleaner, more sophisticated edge. In the rear, the appearance is more detailed, yet still clean and uncluttered.

The good looks continue inside, where designers strived to endow the Corolla with what they call, “sensuous minimalism.” A high-resolution 8-inch infotainment touchscreen (7-inch on base L models) anchors the center of the instrument panel, nestled above a simple row of climate control buttons bookended by two rotary knobs. The screen also has two knobs –– one for power and volume, the other for tuning and scrolling – and a number of shortcut buttons stacked artfully on either side of the screen.

Beneath that is something rare in modern car design: open space in the center of the dashboard. The center console and instrument panel don’t physically connect. This lends a feeling of spaciousness, and gives the different elements a sculptural feel. The interior has an articulate grace that feels neither cheap nor sparse. Two-toning, topstitching and clever material choices evoke a premium feel. Like its hatchback sibling, the cabin is not merely captivating; it’s one of the best on the market. That’s quite a feat in this segment.

As if to accentuate that the Corolla is a car and not a crossover, its seating position has been lowered, as has the roofline. As for the seats, higher trim levels are finished with two-toning in what Toyota calls SofTex; you’ll call it vinyl or Naugahyde.

When it’s time to move, SE and XSE grades get Toyota’s 2.0-liter four-cylinder engine rated at 169 horsepower and 151 pound-feet of torque. Less-expensive L, LE, and XLE grades use the 139-horsepower 1.8-liter engine found in the previous generation Corolla. All engines mate to a six-speed manual or a continuously variable automatic transmission. Putting that power to the pavement is a MacPherson strut front suspension and multilink rear suspension attached to 16-inch wheels on LE and XLE grades, and 18-inch rubber on SE and XSE trims.

Toyota didn’t released pricing on the new Corolla. Expect the price to be released closer to the car’s on-sale date in the spring.

Having built a reputation for economy and reliability over 45 years, the redesigned 2020 Corolla adds a new wrinkle: sporting sophistication.