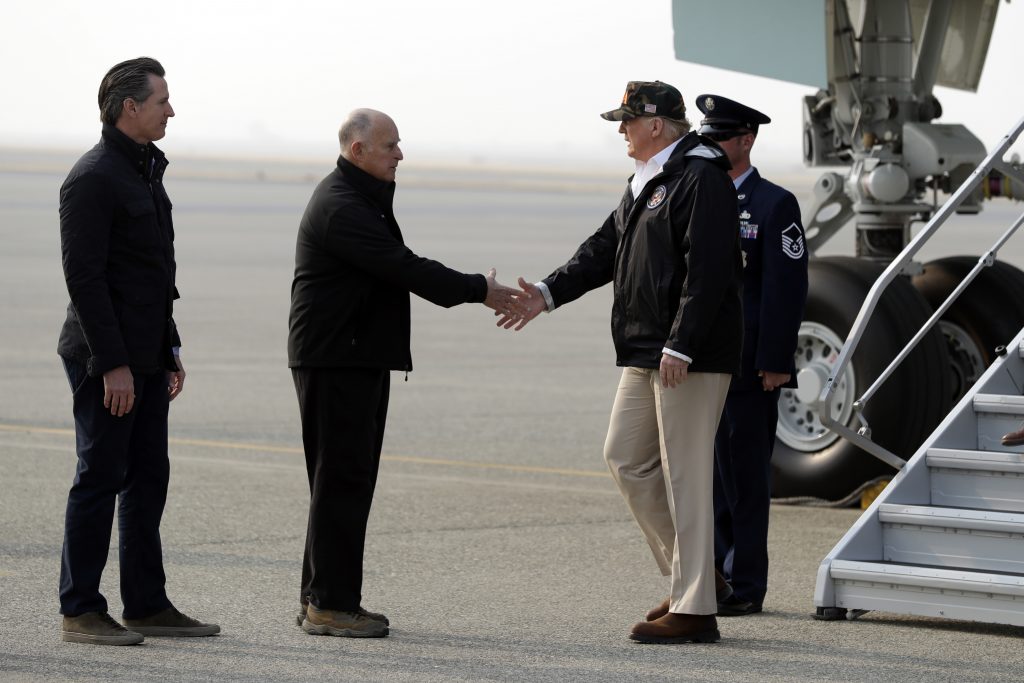 President Donald Trump arrived in Northern California on Saturday to see firsthand the grief and devastation from the deadliest U.S. wildfire in a century amid confusion over how many people remain unaccounted for.

Authorities confirmed a new death toll of 71 and say they are trying to locate 1,011 people, even as they stressed that not all are believed missing.

California’s outgoing and incoming governors, both Democrats and vocal critics of Trump, greeted him when he landed at Beale Air Force Base just north of Sacramento and got onto a helicopter. Gov. Jerry Brown and Gov.-elect Gavin Newsom welcomed Trump’s visit, declaring it’s time “to pull together for the people of California.”

The blaze that started Nov. 8 largely destroyed the town of Paradise, population 27,000, and heavily damaged the nearby communities of Magalia and Concow. It destroyed more than 9,800 homes and at its height displaced 52,000 people.

Trump also was expected to stop in Southern California, where a wildfire recently killed three people and a gunman shot a dozen people to death at a country music bar in Thousand Oaks on Nov. 7 before killing himself.

The fire zone in Northern California is to some extent Trump country. He beat Hillary Clinton by 4 percentage points in Butte County in 2016.

But Trump has stirred resentment among survivors for blaming the fire on poor forest management in California, making the comments two days after the disaster on Twitter and reiterating them the day of his visit.

More than 5,600 fire personnel were battling the blaze that covered 231 square miles and was halfway contained, officials said.

Firefighters were racing against time with winds up to 40 mph and low humidity expected Saturday night into Sunday. Rain was forecast for midweek, which could help firefighters but also complicate the challenging search for remains.

“It’s a disheartening situation,” Butte County Sheriff Kory Honea told reporters Friday. “As much as I wish we could get through this before the rains come, I don’t know if that’s possible.”

The number of people unaccounted for grew to more than 1,000 on Friday. But Honea acknowledged the list was “dynamic” and could easily contain duplicate names and unreliable spellings of names.

The roster probably includes some who fled the blaze and do not realize they have been reported missing, he said.

“We are still receiving calls. We’re still reviewing emails,” Honea said. “This is a massive undertaking. We have hundreds and hundreds of people working on this.”

Families searching for loved ones have scoured shelters and social media and say they understand the chaos of the situation, but the wait for information is agonizing.