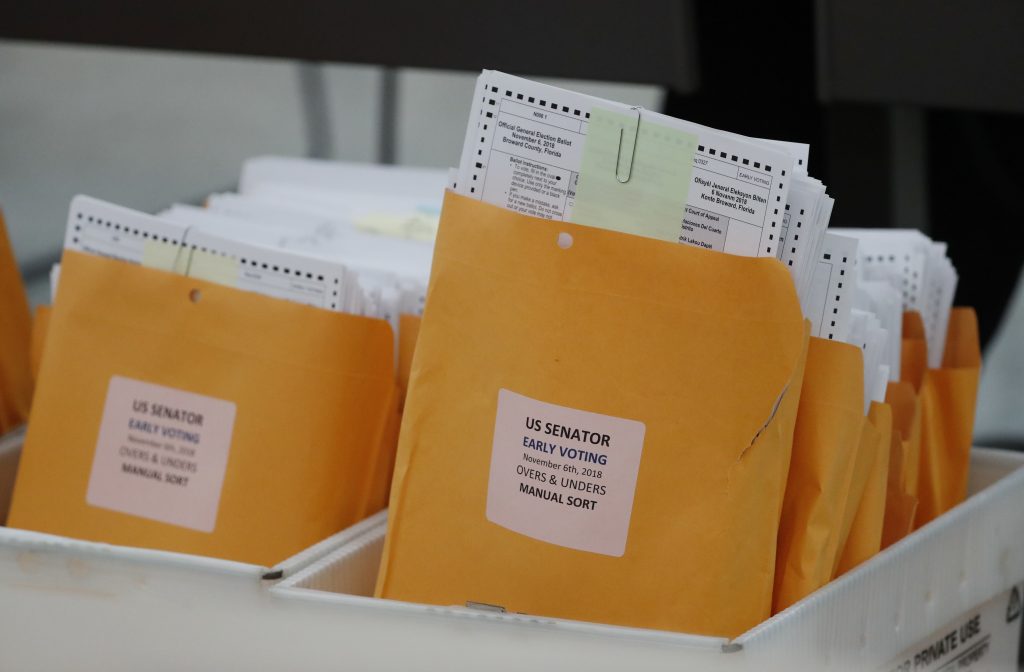 Volunteers gathered around folding tables Friday to begin a painstaking hand recount in Florida’s acrimonious U.S. Senate contest, with a goal of determining the intent of about 93,000 voters whose ballots for Republican Gov. Rick Scott or Democratic Sen. Bill Nelson could not be counted by machine.

The hand recount is required by state law whenever candidates are separated by 0.25 percentage points or less. Unofficial results showed Scott ahead of Nelson by 0.15 percentage points, or fewer than 13,000 votes out of more than 8 million cast.

In Broward County, officials relied on a color-coded system to tally some of the last ballots by hand.

Dozens of volunteers sitting behind the bins stacked on folding tables in a Broward County warehouse cheered loudly when they finished their hand recount Friday morning. Results were not immediately announced.

At the election supervisor’s office in Tampa, volunteers were joined by observers from both political parties at 12 tables as the recount started.

The ballots were in a locked wire basket on a rolling cart when they were delivered to the room. An elections office employee cut the lock off the basket, and the ballots were distributed to the tables, where teams of two volunteers examined each one.

The hand recount does not review all votes. It involves ballots that were not recorded by voting machines because voters cast either two votes for one race, which is called an overvote, or appeared to choose no candidate, which is an undervote. The idea is to figure out a voter’s intent.

Broward County — which experienced numerous problems throughout the election — had the most overvotes and undervotes of any Florida county — almost 31,000.

Just a day earlier, the county missed the deadline to submit its machine recount results by two minutes. But it finished its manual recount in just a few hours, which Elections Supervisor Brenda Snipes attributed to the large number of volunteers assembled for the task.

The contest for governor appeared all but over Thursday, with a machine recount showing Republican DeSantis with a large enough advantage over Democrat Andrew Gillum to avoid a hand recount in that race, which had a margin of 0.41 percent.

Gillum, who conceded on election night only to retract his concession later, said in a statement that “it is not over until every legally casted vote is counted.”

The overall recount has been fraught with problems. One large Democratic stronghold in South Florida could not finish its machine recount by the Thursday deadline because of machines breaking down. A federal judge rejected a request to extend the recount deadline.

“We gave a heroic effort,” said Palm Beach Supervisor of Elections Susan Bucher. If the county had three or four more hours, it would have made the deadline to recount ballots in the Senate race, she said.

Two election-related lawsuits were pending in federal court in Tallahassee.

On Thursday, the situation drew the ire of U.S. District Judge Mark Walker, who slammed the state for repeatedly failing to anticipate election problems. He also said the state law on recounts appears to violate the U.S. Supreme Court ruling that decided the presidency in 2000.

“We have been the laughingstock of the world, election after election, and we chose not to fix this,” Walker said at a hearing.

By the next election cycle, he said, “voters are going to want to have more in terms of assurance that their votes are going to be properly counted.”

In the meantime, Florida voters have until 5 p.m. Saturday to show a valid identification and fix their ballots if they haven’t been counted due to mismatched signatures.

State officials testified that nearly 4,000 mail-in ballots were set aside because local officials decided the signatures on the envelopes did not match the signatures on file. If those voters can prove their identity, their votes will now be counted and included in final official returns due from each county by noon Sunday.

Also Friday, Walker rejected a lawsuit that challenged Florida’s vote-by-mail deadlines. A veterans’ voting rights group and Democrats challenged the law that said ballots mailed inside the United States could not be counted unless they were received by 7 p.m. on Election Day. The groups said that was unconstitutional and asked that the ballots be counted as long as they are postmarked by Election Day and received within 10 days after the election.

Walker said those rules were in place for more than a decade and to change them now would “undermine the electoral process.”