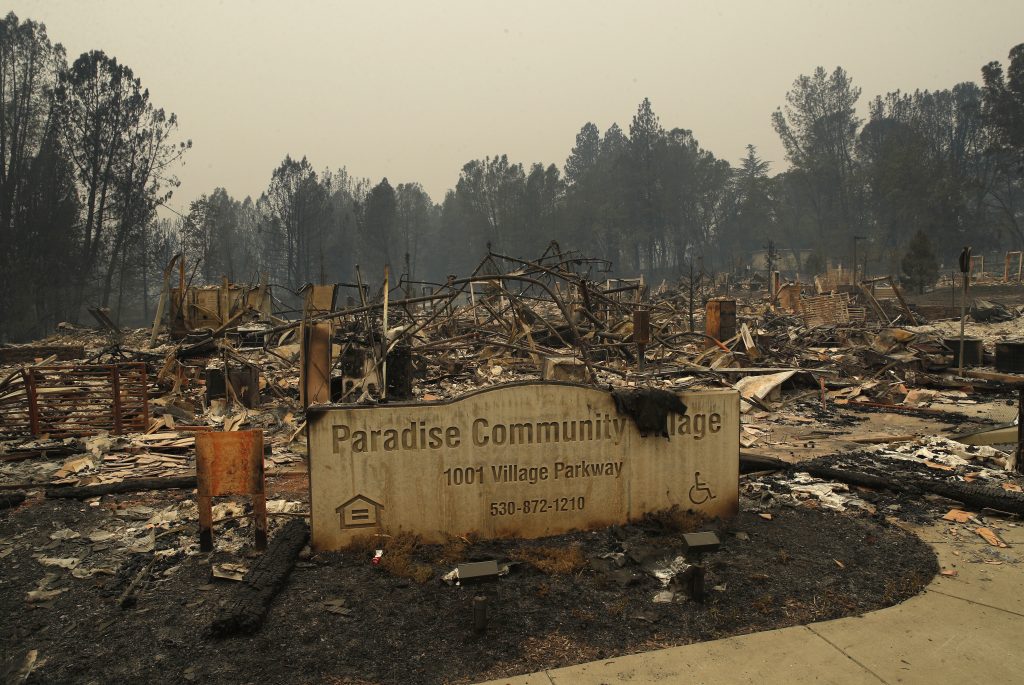 Family members and survivors of the deadliest wildfire in California history sought news on Friday on the 630 people missing a week after the fast-moving blaze reduced much of the town of Paradise to ash and charred rubble.

With nearly 12,000 homes and buildings burned, refugees from the fire have taken up residence in tents or their vehicles and filled evacuation centers to overflowing. Search teams, meanwhile, are combing through burned-out areas looking for bodies – or anything else that might carry human DNA.

The number of people unaccounted for after the fire has fluctuated all week and officials have warned that those numbers are almost certain to change day by day. In some cases, those unaccounted for have likely survived but not yet notified family or authorities that they are alive, or relatives may not yet have reported people missing. Poor cellphone coverage after the fire has also made communications difficult.

On Friday morning, the California Department of Forestry and Fire Protection, known as Cal Fire, said the death toll in the fire held at 63 overnight. The blaze, named the Camp Fire, was now 45 percent contained, up from 35 percent on Thursday, even though it had grown slightly to 142,000 acres.

The fire – which roared through Paradise, a town of 27,000 people in the Sierra foothills 175 miles north of San Francisco, on Nov. 8 – is among the deadliest to have hit the United States over the last century.

Authorities attribute the death toll partly to the speed with which flames raced through the town, driven by wind and fueled by desiccated scrub and trees.

Weather conditions now are helping the firefighting effort, Nick Pimlott, a Cal Fire engineer, told KRCR TV. He said the winds had died down, allowing local crews around Lake Oroville to the southeast of Paradise to construct fresh lines to contain the fire.

Many on the missing list are over the age of 65. Local officials and realtors have long sold Paradise as an ideal place to retire.

Brandon DuVall of Seattle said he last communicated with his retired father, Robert DuVall, in July after the father had bought a new pickup and camper. He received a call earlier this week that his father’s remains might have been found and now will go to California to provide a DNA sample.

Relatives of retired U.S. Navy veteran David Marbury, 66, are waiting to hear from him. No one has managed to speak with him since the wildfire began, and relatives’ phone calls have gone directly to his voicemail.

On Thursday, Marbury’s landlord confirmed to relatives that his duplex in Paradise had burned down. Sheriff’s officials told them his car was still in the garage.

“I really hope he’s still alive and we’re going to be able to see him,” Marbury’s niece Sadia Quint, 30, told Reuters by phone. “We just hope that he’s still with us.”

Some in Paradise were experiencing survivors’ guilt. “You’re like, ‘Why am I here?'” Sam Walker, a pastor at the First Baptist Church of Paradise, told WBUR radio. “‘Why is my family all here? Why are our churches still standing?’ I don’t know. My house is gone, like so many others.”

Thousands of additional structures remain threatened as firefighters, many from distant states, try to contain and suppress the flames.

There have been other smaller blazes in Southern California, including the Woolsey Fire, which is linked to three fatalities and has destroyed at least 500 structures near the Malibu coast west of Los Angeles. It was 57 percent contained.

Two electric utilities say they sustained equipment problems close to the origins of the blazes around the time they were reported.

President Donald Trump, a Republican, is due to visit the fire zones on Saturday to meet displaced residents. Critics say Trump politicized the fires by blaming them, without supporting evidence, on bad forest mismanagement by California, a largely Democratic state. Trump had threatened to withhold federal assistance.

Smoke from the Camp Fire has spread far and wide. Public schools in Sacramento 90 miles to the south, and as far away as San Francisco and Oakland, canceled classes for Friday due to poor air quality.

Many of those who survived the flames but lost homes stayed with friends or relatives or at American Red Cross shelters.

Some of Paradise’s older residents who had lost their homes were concerned about where they would live.

“I’m just very hopeful I can work something out for the future,” Norris Godsey, 82, told the San Francisco Chronicle at a church evacuation center in Chico. “If that’s not possible, I don’t know what I’ll do.”