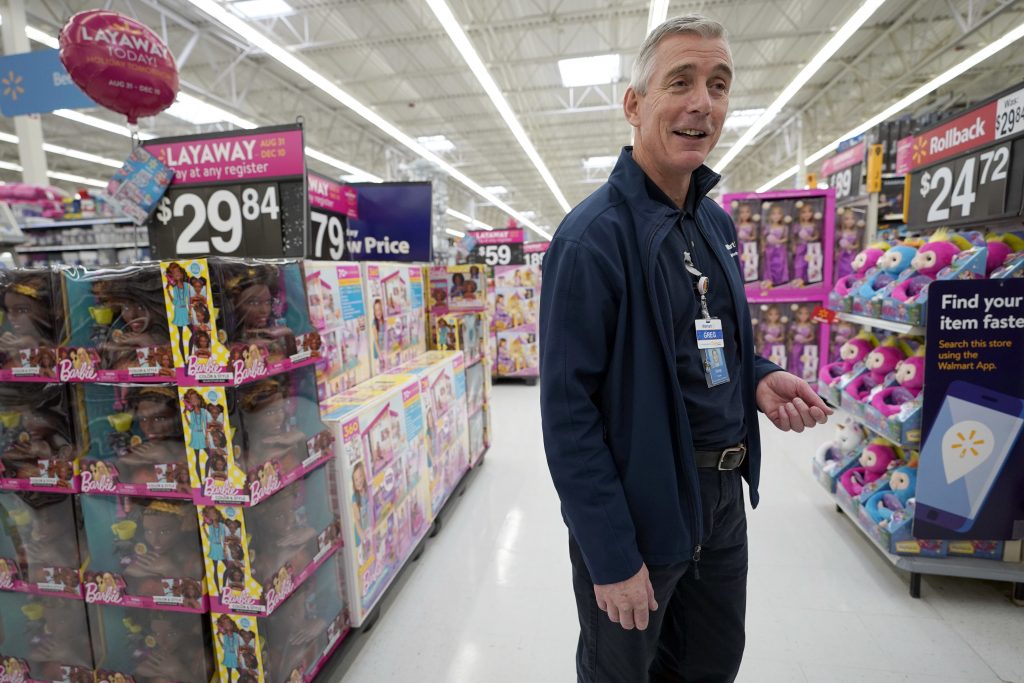 Walmart, armed with grocery and other online services, is proving it can do battle with Amazon.

The world’s largest retailer delivered strong third-quarter results Thursday, extending a streak of sales growth into its 11th straight quarter that showed it’s pulling shoppers online and in the store. It also raised profit expectations for the year heading into the year-end season.

Like other retailers, Walmart is benefiting from a strong job market and rising consumer confidence. Home Depot and Macy’s raised annual profit expectations this week. But they are also benefiting from the misfortunes of others. Toys R Us and Bon-Ton Stores have gone out of business, while the bankruptcy of Sears Holdings Corp. is creating more opportunities to grab sales. Meanwhile, J.C. Penney is still floundering, with shares plunging after the company withdrew profit guidance and lowered its sales expectations for the year.

Walmart sales were strong in such areas as fall seasonal goods, toys and fresh food. That helped sales at stores open at least a year rise 3.4 percent, a bit slower from the previous quarter’s 4.5 percent at Walmart’s U.S. division, which marked its best performance in more than a decade. The measure, an indicator of a retailer’s health, was helped by a 1.2 percent increase in customer traffic and a 2.2 percent increase in transactions.

Since buying Jet.com for more than $3 billion two years ago, Walmart has been expanding its online business by acquiring brands and adding thousands of items. It’s also been ramping up grocery delivery and pickup options. Grocery pickup is now offered at nearly 2,100 of its 4,700 U.S. stores, while grocery delivery is available in nearly 600 locations. Walmart has also revamped its website with a focus on fashion and home furnishings. That all helped to drive a 43 percent increase in online sales in the U.S. during the latest quarter. That was up from a 40 percent increase the second quarter period and a 33 percent increase in the first quarter.

A visit to a Walmart store in Houston last week showed generous offerings in year-end merchandise such as large interactive toy ponies and hot pink toy cars stacked high in aisles. Shoes are now unboxed and are hanging on racks to make it easier for shoppers to find them.

“We’re feeling confident going into this [year-end season],” said Walmart U.S. CEO Greg Foran during an exclusive interview and tour last week at the Houston store. “I think the standards, the flow of merchandise, our pricing are feeling better than it was a year ago.”

Walmart, based in Bentonville, Arkansas, is promising more to come. Under Foran, Walmart is creating a tech-powered shopping experience at its stores, while transforming them into efficient distribution hubs that can fill online orders to reduce shipping costs and speed up deliveries. To do that, Walmart is doing more extensive training for workers who are taking on new roles or redefined responsibilities while using scanning robots and other automation.

Walmart is deploying giant pickup towers that spit out online orders in hundreds of its stores. Customers can now also better find items in the store because of digital maps on their smartphone. Workers, armed with new apps on their mobile devices, are also able to manage routine tasks, freeing them to serve the customer or check them out in key areas of the store.

“We can provide a much better customer experience because we are in stock of the right item, at the right time and at the same time it is going to help us be much more precise,” he added.

Still, Foran acknowledges it’s facing stiffer competition from Amazon as well as other traditional chains like Target. Consulting firm Bain & Co. predicts that Amazon in the U.S. will outgrow the market and capture up to half of all e-commerce sales by the end of the year, making it even stronger than a year ago.

In fact, in the free shipping arena, Walmart found itself the laggard during the start of the year-end season. Target for the first time got rid of its $35 threshold for two-day delivery for the shopping season. That move was followed by Amazon, which announced earlier in the month that it was going to make two-day shipping available to all shoppers including non-Prime customers, without the $25 spending requirement.

Amazon is also expanding its cashier-less physical stores, pushing Walmart and others to speed up checkout, a source of frustration for many shoppers. In time for the shopping season, Walmart has rolled out a program that allows its staff to check out customers and provide receipts right on the spot in the busiest sections of the store. Foran told The Associated Press that it’s looking to bring back Scan & Go, which allowed shoppers to scan items while they shop with their own personal device or a Walmart device and walk out. It had been shelved twice after customers found it too clunky.

But the first big test this shopping season is Black Friday.

“It’s a proxy for stores. If you run good stores, people will want to go to them,” said Foran, who will be on a plane from 2 p.m. to midnight on Thanksgiving visiting stores and monitoring the sales.

The company on Thursday posted third-quarter earnings of $1.71 billion, or 58 cents per share. Adjusted earnings were $1.08 per share, which is 6 cents better than expected.

The world’s largest retailer posted revenue of $124.89 billion, about in line with forecasts.