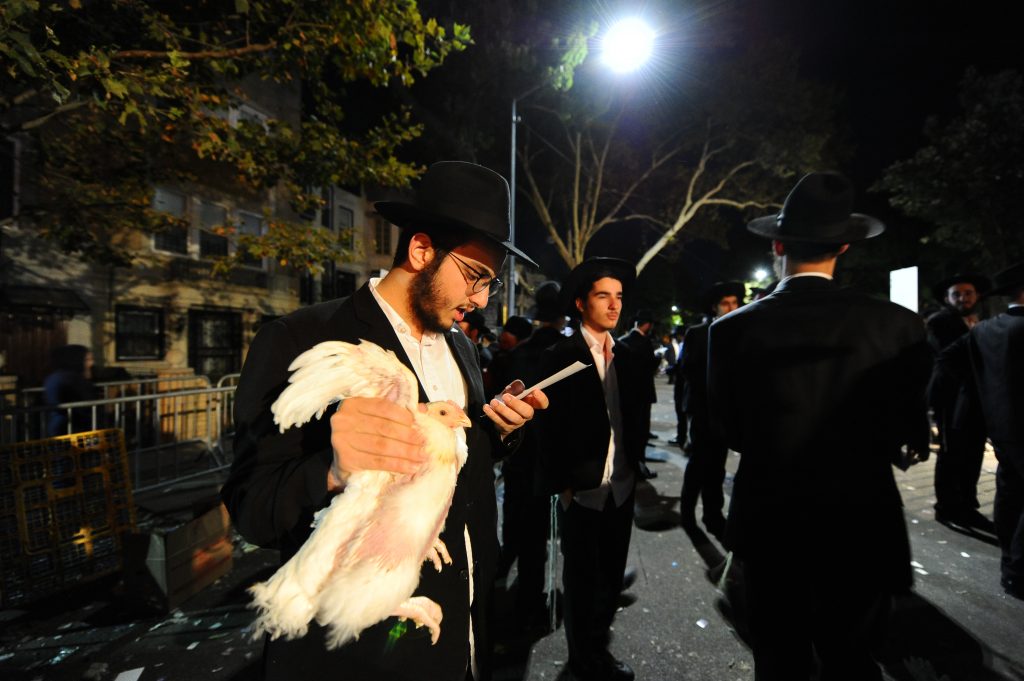 New York state’s highest court handed a victory to the Orthodox community in its latest legal standoff to preserve the right to perform the custom of kapparos using live chickens.

The present suit, brought by an “animal liberation” group, named the New York Police Department as well as the Department of Mental Health and Hygiene as defendants claiming they are failing to enforce certain health and animal protection codes by allowing kapparos to be performed in New York City. In a decision handed down Wednesday, the state’s Court of Appeals struck down the challenge saying that the police’s decision to allow kapparos to be performed was well within the normal bounds of discretion allowed to the department.

Rabbi Mordechai Biser, general counsel for the Agudath Israel of America, which submitted a supporting brief in the case, welcomed the ruling.

“We’re very pleased that the highest court has ruled against the plaintiff and that kapparos will be able to continue here in New York,” he told Hamodia.

Starting in 2015, a group known as the Alliance to End Chickens as Kapparos, has brought a series of legal challenges to the performance of the pre-Yom Kippur ritual. Initial attempts also named a list of over 20 Jewish institutions that facilitate kapparos, but after a lower court struck down the suit, the group pursued later legal actions only against city agencies. Subsequent actions have also called for temporary injunctions, typically filed shortly before Rosh Hashanah, calling for the practice to be halted while cases are pending. Courts have consistently denied these motions as well.

The plaintiffs have sought a “writ of mandamus,” a court order compelling other government bodies to enforce certain laws, they claim are being violated. Oral arguments in the case were held in Albany on October 17.

The present unanimous ruling upholds two lower court decisions denying the motion. The judges did not weigh in on whether any codes were in fact being violated, but said the Alliance was not seeking to compel the city to uphold the law, but rather “a particular outcome.” They added that the ways and means of law enforcement in such as case are up to the relevant agencies.

The Agudah’s brief, prepared by the First Liberty Institute and the law firm Vinson and Elkins, focused largely on the right of the Orthodox community to practice kapparos in accordance with the time-honored custom as a basic First Amendment protection. The court did not weight in on any issues pertaining to religious liberty, presumably as it was not deemed necessary to do so in order to dismiss the Alliance’s claims.

“We’re grateful that New York’s highest court rejected this effort to force government officials to ban a thousand-year-old religious tradition,” said Roger Byron, senior counsel to First Liberty. “The First Amendment protects the peaceful religious practices of all faiths. This is a victory for all Americans who value our constitutional freedoms.”

Nora Constance Marino, an attorney and animal-rights activist who has represented the Alliance in their attempts to stop the performance of kapparos, told Hamodia that her clients will “continue to explore other legal remedies.”

“It is disturbing that the city continues to turn a blind eye to 15 laws being violated,” she said, emphasizing that language used in the statutes her clients claim are being violated mandates enforcement.

“It remains plaintiffs’ position that it is the role of the judiciary, consistent with our system of checks and balances, to intervene,” said Constance Marino. “We are disappointed that the court did not exercise their power to right this wrong, or at least give plaintiffs the opportunity to develop the record.”

The Police Department did not return a request for comment from Hamodia.

The Alliance is an arm of the Virginia-based United Poultry Concerns, an organization that advocates against the consumption and use of fowl in many forms. In addition to supporting attempts to stop kapparos, they also run a yearly campaign against purchasing turkeys for Thanksgiving.

Each year, the group organizes protests and “vigils” at multiple locations where kapparos is performed, mostly in New York, but others in California and other states as well. On several occasions they have aggressively harassed people coming to perform the ritual as well as attempting — sometimes successfully — to abscond with chickens.

Lawsuits brought by the Alliance in California are still pending in both state and federal courts, but have so far lower courts there have issued similar dismissal orders to those in New York.

Rabbi Shea Hecht, whose family organization has facilitated kapparos in Crown Heights for decades was one of those originally named as a defendant and his site is often targeted with the largest protests. He said that the Alliances attacks in the first place were biased and hoped the ruling would be the end of several years of litigation.

“They know that they can’t shut down every restaurant that serves meat or every store that sells leather and fur, so they pick on us because they know we’re a soft target and the result is an attack on my religious rights We hope that now they’ll stop bothering us,” he told Hamodia. “This is an important win and the biggest winners are Jews who can go on fulfilling this minhag the way their fathers and grandfathers did.”