Technology Experts Chase the Cause of a Paralyzing Childhood Disease Spiking This Year
Health, Science & Technology 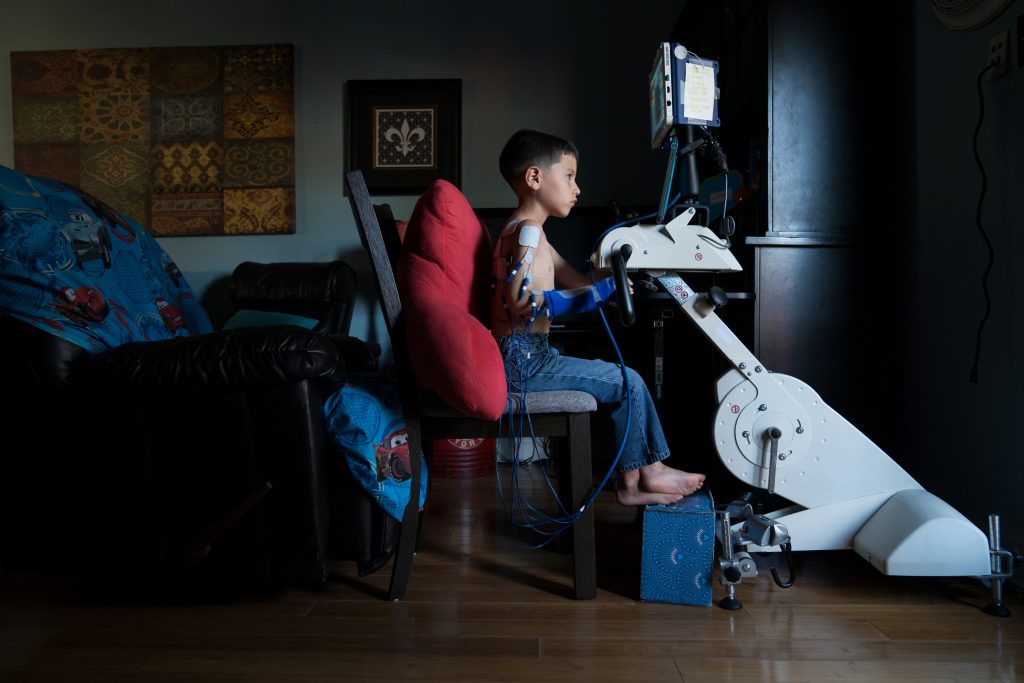 By the time Jourdan Loyola was finally diagnosed with a rare and baffling condition called acute flaccid myelitis two years ago, the 5-year-old could not move his neck, right arm or either leg. Unsure how to treat the unusual condition, which began with cold-like symptoms and progressed within days to paralysis, doctors in New Orleans scrambled to consult colleagues across the country before giving him steroids and a massive dose of disease-fighting antibodies.

His legs recovered, but his arm and neck remained weak. A nine-hour surgery to transfer nerves from his ribs to replace crucial nerves that power his arm muscles strengthened the limb. But now, at 7, he still can’t tie his shoes or wash his hair or write with his right hand.

His daily routine includes intensive physical therapy and electrical stimulation of his muscles that often causes skin rashes. Doctors told his parents that they don’t know whether he will ever get back full use of his right arm.

“They don’t have a time frame,” said Chelsi Loyola, his mother, who wonders whether earlier diagnosis and treatment might have helped. “To me, that’s so hard to hear. I just want him to recover.”

As AFM cases have surged this fall — the third spike since 2014 — federal health officials and clinicians across the United States have raced to understand the disease. On Tuesday, officials at the Centers for Disease Control and Prevention are expected to announce a new task force to study the condition and come up with fresh leads on what causes it and how to treat it.

In the meantime, parents of sick children are growing increasingly frustrated. Competing theories have emerged about what triggers AFM; without clear guidance, doctors are trying several different kinds of treatment. While some children have seen improvement, so far no treatment has been found to lead reliably to full recovery. Many will need intensive physical therapy for years. Some need a ventilator to help them breathe.

“It’s not that often we’re faced with something we’re still learning about,” said Michelle Melicosta, a pediatrician at the Kennedy Krieger Institute in Baltimore, which specializes in disorders of the brain, spinal cord and musculoskeletal system. “We just don’t always have the answer we wish we had. It makes it a little scarier for the family.”

AFM is caused by inflammation of the spinal cord that results in severe muscle weakness and paralysis. More than 400 confirmed cases, most of them in children, have been reported in the past four years, and one child with AFM died last year. Clinicians say the condition is underdiagnosed and underreported.

Though AFM has been reported occasionally for years, the CDC began noticing spikes in 2014. Cases have since surged every other year in the fall. In 2014, the CDC confirmed 120 cases. In 2016, there were 149.

This year, at least 80 cases have been confirmed from 25 states, with 139 more under investigation. A few weeks ago, the CDC began reporting the larger number of suspected cases alongside confirmed ones to alert both parents and physicians to the latest spike.

Several experts say there is a strong correlation between AFM and outbreaks of a common respiratory virus called enterovirus D68. Some enteroviruses are known to attack the spinal cord.

The CDC, however, is focusing on a different possibility: That AFM is caused not by a viral infection but by the patients’ own immune systems.

“It seems to be more of an autoimmune syndrome as opposed to a direct result of a virus,” said Nancy Messonnier, director of the CDC’s National Center for Immunization and Respiratory Diseases. She compared the condition to what happens in Guillain-Barré syndrome, a rare disorder in which the immune system attacks nerve cells, often after an illness such as a respiratory infection.

Most AFM cases begin in a similar fashion, with fever and cold-like symptoms, such as a cough and lethargy. Sudden weakness or paralysis can follow within hours or days.

“Lots of kids get respiratory illness and fever, but only a small proportion go on to develop AFM,” Messonnier said. “What we don’t know about is this black box in between. . . . We’re trying to open up that black box.”

Last week, the CDC held a teleconference with a group of experts who treat AFM and plans to release updated treatment guidance for doctors later this week. Separately, about 50 specialists who have diagnosed and cared for patients across the country have taken the unusual step of establishing an informal AFM working group.

But without a clear understanding of whether AFM is triggered by a virus or is an autoimmune disease, doctors say it’s difficult to know how to treat it. Some doctors, treating it as an active viral infection, may offer big doses of disease-fighting antibodies. But if AFM turns out to be an autoimmune disorder, it might be more appropriate to use steroids or a blood-filtering technique known as plasmapheresis, which removes harmful antibodies, said Anu Kalaskar, a pediatric infectious-disease specialist at Children’s Minnesota.

On Friday, another potential treatment was found to be ineffective: A study in the journal Neurology found that the antidepressant fluoxetine, which had inhibited enterovirus D68 in lab tests, did not improve muscle strength in children with AFM.

The one intervention shown to offer benefits to all patients is extensive physical therapy. Other than that, “we still don’t have good evidence on what is most effective,” said Kevin Messacar, a pediatric infectious-disease specialist at Children’s Hospital Colorado in Aurora who is advising the CDC.

Messacar is among the leading advocates of the enterovirus theory, arguing that rises in AFM cases have followed surges in cases of enterovirus D68. The CDC has not consistently found enterovirus D68 in cases of AFM, but Messacar and others say doctors need to look harder. The virus, which may be cleared from the body by the time muscle weakness appears, can be diagnosed only with special tests on nasal swabs and blood.

“It’s just not intuitive to look into the nose of someone who” presents with paralysis, Messacar said.

For the family of Cooper Allen, 13, of Littleton, Colorado, the past few months have been marked by uncertainty and fear. The eighth-grader was diagnosed in August and has a partially paralyzed left arm. His daily routine includes special exercises and electrical stimulation. He can bend his elbow and has full use of his fingers, but his shoulder and biceps are not working properly. He can’t lift his arm above his head. He can no longer wrestle, a favorite sport since he was 5. When his 5-year-old sister fell off a stool next to him, he wasn’t able to catch her.

She wasn’t hurt. But as his mother, Amber Allen, recalled, “It was one of the only times Cooper has cried.”

Cooper’s parents are considering one of the latest interventions being offered to AFM patients: nerve transfer surgery, a long-standing technique that reroutes nerves from one part of the body to the injured area. But timing is critical. Pediatric surgeons say the ideal window is six to nine months from the date of onset.

Jourdan Loyola got sick in August 2016, on the third day of kindergarten. He was seen by at least three clinicians as his cough and lethargy developed into severe neck pain. Clinicians at an urgent-care clinic, a hospital emergency room and his pediatrician prescribed antibiotics. He was hospitalized for two months.

“The fact that three doctors had seen this child before he became paralyzed just baffles the mind,” said his mother, Chelsi, an emergency room nurse.

The youngster now follows an extensive physical therapy program, with hours of daily exercises at his home on the outskirts of New Orleans. He and his mother travel for regular visits to Kennedy Krieger. They will spend his eighth birthday, which happens to fall on Thanksgiving, at the Baltimore facility.

Jourdan can bend his right arm at the elbow now and raise it about 30 degrees. It’s still visibly thinner than his left. “But just to see it fatten up, oh my G-d,” she said.

On a recent afternoon at home, Jourdan pedaled with his arms for 30 minutes on a special bike that measures how hard his right arm (which he nicknamed “Gimpy”) is working. Electrodes covering his arm sent pulses to 12 muscles.

With two minutes left, his right shoulder sagged from fatigue. His mother pushed it back against the chair so his arm could get the proper workout.

“Mama!” he yelled out in pain.

“Come on, one minute left,” she said.

“Come on!” she urged, not letting up. “Make Gimpy do all the work.”

With 30 seconds left, he pedaled hard and finished with a burst of speed.

Stretches and weights followed. Then he and his older brother Joseph played baseball in the driveway. Wearing a portable muscle stimulator, Jourdan gripped a bat with both hands and swung hard, his left arm guiding the weak right. He hit several balls in a row. One almost struck a car parked on the street.

“Good drive!” his mother yelled as he turned to her with a grin.

“High-five! High-five with Gimpy,” she said.

She didn’t want to miss any chance to work his arm.