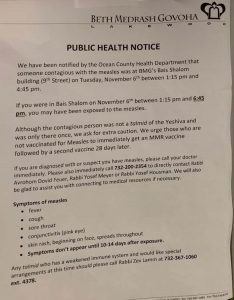 A day after more cases of measles were confirmed in Lakewood, a sign posted by Beth Medrash Gevoah warned its talmidim and others who have been in its buildings of possible exposure to this highly contagious virus.

The poster says that an individual who has now been diagnosed with the illness was in the Beis Shalom building between Clifton and Madison Avenues on Tuesday afternoon, November 6. The person was not a talmid of the yeshivah, but according to the Ocean County Department of Health, he was there between 1:15 p.m. and 4:45 p.m.

Due to the airborne nature of the virus and that fact that it lingers in the air, the sign cautions, anybody who was in the building between 1:15 p.m. and 6:45 p.m. might have been exposed.

The posting urges anyone who has developed symptoms such as fever, pinkeye, or a cough and has reason to suspect that it is measles should contact the appropriate medical authorities. The Yeshivah adds that anyone who has not yet been vaccinated should receive the MMR (measles, mumps, rubella) vaccine as soon as possible, followed by the second dose 28 days later.

The outbreak, which has spread from Eretz Yisrael where cases number more than 1000, was first discovered in the Orthodox community in Rockland County after Sukkos, and has since spread to several other population centers. The first cases in Lakewood were confirmed a little more than three weeks ago. Yesterday, several more cases were confirmed; the town’s total number of affected individuals is now 11.

The Ocean County Department of Health has formally declared the situation an outbreak and encourages schools not to allow any non-vaccinated students on their premises.