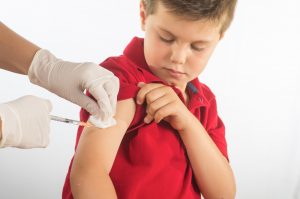 Three weeks into Lakewood’s measles outbreak, reports of new cases have stabilized, as record numbers raced to receive vaccinations, and more schools have taken steps to insist that all students are immunized from the potentially dangerous virus.

Some privately operated schools in Lakewood have for some time insisted on vaccinations as a pre-requisite for admission, but as news of the outbreak spread, several more told parents that under the present circumstances they could not risk having unimmunized students in the school. The decision followed the advice of a letter signed by more than 30 of the town’s pediatricians that unimmunized children not be allowed into schools for the duration of the outbreak.

Late last week, as a sixth confirmed case of the virus was reported, the Ocean County Health Department (OCHD) issued guidance that it “supports” and “highly encourages” the exclusion of non-vaccinated children from schools and day care centers as a means of containing the outbreak.

“Slowly but surely we’re getting there,” the administrator of a cheder who requested anonymity told Hamodia. “I called the two parents in the school who had exemptions and told them that we can’t let their kids come to school until their get their shots. We’re working with them and one already got the shots.”

The administrator’s experience is mirrored by several other reports that many parents who had previously claimed a “religious exemption” from state vaccination requirements had agreed to immunize their children under the threat of exclusion from schools.

According to reports, more than 2,500 individuals were vaccinated over the past two weeks, some in local doctors’ offices and many others at CHEMED health center or through the Ocean Health Initiative, which offered free MMR shots for all of last week.

Many Lakewood schools had followed earlier advice from the OCDH to only eliminate un-immunized children in the event that someone connected to a student or staff member was diagnosed. Yet fear of the potential harm that the airborne virus, which is particularly dangerous to young children and expectant mothers, led many to insist that schools take stronger measures.

Several chadarim and girls’ schools changed their policy and agreed to eliminate all un-immunized students after several dozen teachers refused to return to work unless that step was taken.

“Based on Dr. [Reuven] Shanik’s advice and the demand from most of the tzibbur, a lot of schools are sending home kids who didn’t get the vaccine,” said a spokesman for Igud haMosdos. “A lot of schools have kids with medical conditions and they have to do what they have to, to protect them.”

As of Tuesday morning, there had been no new diagnoses, but there are several more suspected cases that have not yet been confirmed. Symptoms, which include high fever, runny nose and a cough usually only appear a week or two after the virus has been contracted. Three to five days afterwards, if one is infected, the measles rash will typically appear on the body.

An outbreak is declared over once no new cases have been reported for 21 days.