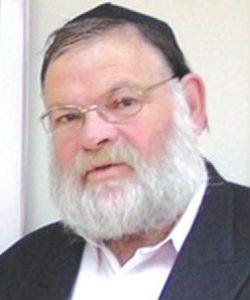 Shock and grief met the news on Friday morning of the sudden passing of Rabbi Avraham Aharon Rosentahl, z”l, the head of the Telz-Stone city council, and a prominent Sadigura chassid who was close to both the previous and current Sadigura Rebbes. Rabbi Rosenthal passed away suddenly of cardiac arrest at the age of 71.

Reb Avraham was born on Chol Hamoed Sukkos 5708 in Yerushalayim. His father, Rabbi Chaim Shimon Pinchas, z”l, and his mother, a”h, both descended from prominent families in the city, including the followers of the Baal Shem Tov on one side and the followers of the Gra on the other side, who came to Eretz Yisrael. They were also descended from Harav Nachum of Shadik, zy”a, and Harav Yechiel Michel of Zlotchov, zy”a. Reb Avraham was raised in a home saturated with Torah and chassidus, humility and chessed, and these imbued him with values for life.

Rabbi Rosentahl would often speak of his grandfather, the mekubal, Harav Yisrael Moshe Rosentahl, zy”a, who was known as “Warshaver,” for the name of the city where he had come from. In his humility, he refused the request of Harav Shmuel Salant, zy”a, to serve as a dayan on his beis din at the age of 31. Harav Yisrael Moshe was very active on behalf of the poor of Yerushalayim, and traveled to Poland for them even when times for his own family were very difficult and they barely had a roof over their heads. He was deeply respected by the Gedolim of Poland, especially the Sfas Emes of Ger, zy”a.

In Rechovot, Reb Avraham became close to the Rebbe, Harav Dovid Moshe of Kretchnif, zy”a. He began his public work in the city and became the personal assistant of Harav Shlomo Kook, zt”l, the chief rabbi of Rechovot. In this capacity he worked extensively for Torah and Yiddishkeit in the city.

After the tragic passing of Rav Kook in 1977, Reb Avraham moved to the developing town of Kiryat Ye’arim, and served as the director of Yeshivas Telz, under the leadership of Harav Mordechai Gifter, zt”l.

In 1996, he was chosen to head the local city council, a job he held for the next 22 years. Throughout that time, he worked tirelessly for Torah and chessed, turning the little town into a thriving bastion of Torah that offered quality of life and comfortable living standards. He worked to develop kollelim and to provide them with support. Yeshivos, shuls and mikvaos were all established through his efforts, yet he did not want publication. He always rejected efforts to praise him and accord him credit or honor.

In elections held a week and a half ago, he was elected to serve again as city council head.

On Thursday night, he went into sudden cardiac arrest at about 2 a.m. Extensive efforts to revive him were futile and he passed away.

Reb Avraham is survived by his wife, shetichyeh, who was a devoted helpmate in his many activities throughout their life together; his brother, Reb Moshe of Kiryat Sanz; and three daughters, Mrs. Chinkis, Mrs. Ralbag, and Mrs. Waldenberg.

The levayah departed from Kiryat Yearim. Hespeidim were delivered by his sons-in-law, Reb Menachem Chinkis; Rabbi Emmanuel Ralbag, Ra”m in Yesivas Me’or Eliyahu of Telz-Stone, and Rabbi Amiram Waldenberg, Ra”m in Yeshivas Be’er Yitzchak of Telzstone, and by Rabbi Tzvi Yoskovitz, in the name of the mispallellim of the Bais Knesses Chassidim, which he founded and nurtured for many years.

At the Shamgar Funeral Home in Yerushalayim hespeidim were delivered by the Rosh Yehsivah, Harav Nachum Rogoznitzky, shlita, and relatives, Rabbi Yisrael Chinkis and Rabbi Yosef Chinkis, Rosh Yeshivas, Knesses Yaakov in Yerushslayim, who all bemoaned the great loss. He was buried on Har Hazeisim, leaving behind his sterling reputation and good deeds.