Israel New Segment of Highway 6 to Open This Week
Israel 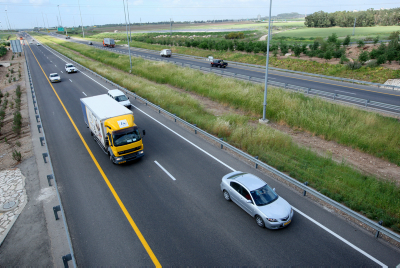 A new segment of Highway 6, the Cross-Israel Highway, is set to open on Wednesday. The new segment will bring the highway closer to the Haifa area, and is expected to significantly ease traffic on some of the major highways in the region that are generally choked with traffic. The new segment, between Yokne’am and Tel Kashish, will feature a 1.7 kilometer tunnel.

The new segment presages the final segment of the highway, which is now under construction, reaching further north to the Somekh Junction, east of Haifa. That segment is expected to open in the latter half of 2019, and when it does, drivers will be able to travel 188 kilometers from Be’er Sheva to Haifa, without any stoplights.

The new segments will not be operated by Derech Eretz, which is responsible for the rest of the highway, but by the Six North company – meaning that drivers who want to subscribe to get discounts similar to those on the rest of the highway will need to sign up with the new company, and install an additional toll pass device that will be automatically read as they drive through the new segments. Prices for subscribers on the toll road are approximately half of the toll cost for non-subscribers. In addition, the operators of the northern segments of the road will institute different toll rates depending on the time of day, with the highest toll price to be charged during rush hours.

“We are opening the segments ahead of schedule, after intensively examining its safety,” said Danny Shenbach, chairperson of the Cross Israel Highway Company. “We are working to open the next segment as well. The new segments will make travel between the north and the center of the country much faster, and ease traffic congestion for residents of the north,” he added.