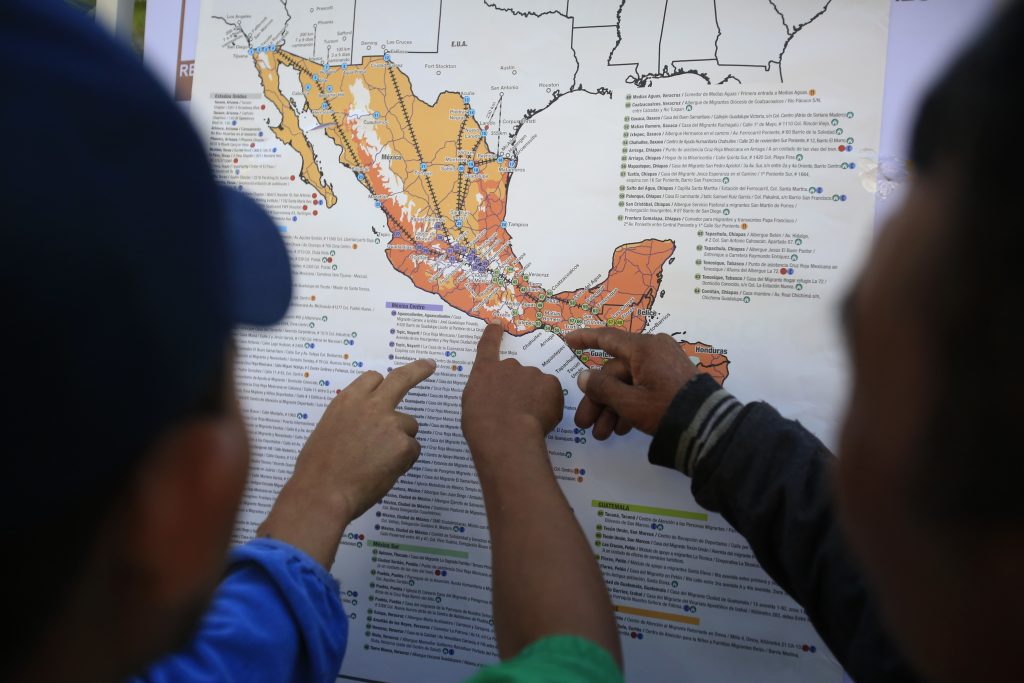 Thousands of Central American migrants were back on the move toward the U.S. border Saturday, after dedicated Mexico City metro trains whisked them to the outskirts of the capital and drivers began offering rides north.

At the Line 2 terminus, migrants began making their way to a main highway to resume walking and hitchhiking with the tacit approval of Mexican officials.

Near a major toll plaza about 19 miles north of the city, Mexico state police and human rights officials helped load men, women and children onto eighteen-wheelers and asked passing buses and trucks if they would carry migrants.

Maria Yesenia Perez, a 41-year-old who left La Ceiba, Honduras, nearly a month ago with her eight-year-old daughter, said she was prepared to wait to gain entry at the U.S. border.

“I decided to come [with the caravan] to help my family,” she said, before she and her daughter were hoisted onto the back of a semitrailer.

Perez is now one of roughly 4,000 migrants who plan to proceed to the city of Queretaro — a state capital 124 miles to the northwest — and then possibly to Guadalajara, Culiacan, Hermosillo and eventually Tijuana on the U.S. border.

Migrants like her carried tiny knapsacks with bare essentials in Mexico’s tropical south, however, their belongings swelled noticeably after a multi-day stop in Mexico City.

Many are now hauling bundles of blankets, sleeping bags and heavy clothing to protect against colder temperatures in the northern part of the country. Some left the capital with bottles of water and clear plastic bags of bananas and oranges for the long trek. Others were given juice and sandwiches from volunteers as they set out.

The caravan became a campaign issue in U.S. midterm elections and President Donald Trump has ordered the deployment of over 5,000 military troops to the border to fend off the migrants.

Many migrants say they are fleeing rampant poverty, gang violence and political instability primarily in the Central American countries of Honduras, Guatemala, El Salvador and Nicaragua, and they have now been on the road for weeks.

The longest leg of the journey still lay ahead.

On Thursday, the U.N. rejected a demand by caravan representatives for buses to the border, saying its agencies were “unable to provide the transportation demanded by some members of the caravan.”

Mexico City is more than 600 miles from the nearest U.S. border crossing at McAllen, Texas, but the area around the Mexican border cities of Reynosa, Matamoros and Nuevo Laredo is rife with crime gangs and the migrants consider it too risky.

Migrants are now taking a still perilous, but somewhat safer and longer route to Tijuana in Mexico’s far northwest, across from San Diego.

Mexico has offered refuge, asylum or work visas to the migrants, and its government said 2,697 temporary visas had been issued to individuals and families to cover them while they wait for the 45-day application process for a more permanent status.

But most vowed to continue to the United States.