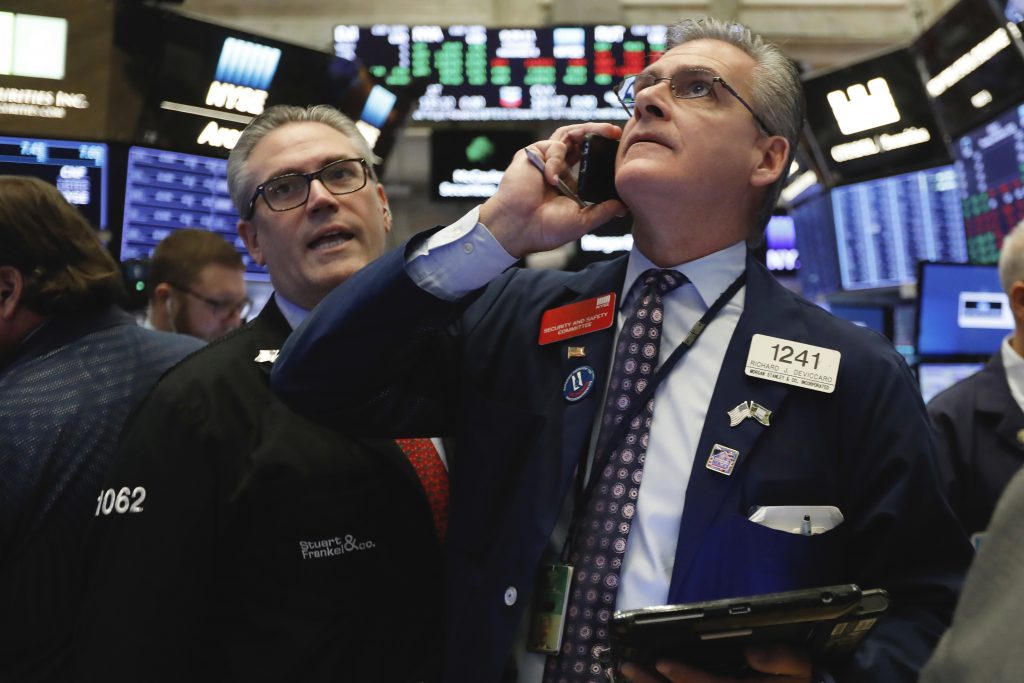 Stocks in the U.S. are slightly lower Thursday afternoon after a big rally the day before. Technology and internet companies are slipping after chipmaker Qualcomm gave a disappointing revenue forecast for the current quarter. Banks are rising as the Federal Reserve wraps up its latest meeting. Stocks have surged over the past week as the market recovered from its October swoon, and they jumped a day ago following the U.S. midterm elections.

Stocks climbed Wednesday after the midterm elections generally went the way investors thought they would. The Democrats took control of the House of Representatives while the Republicans held on to a majority in the Senate. That means that politics appears that much less likely to crowd out the performance of the strong U.S. economy.

COMM ON: Chipmaker Qualcomm had a stronger-than-expected fourth quarter, but investors were startled by its forecasts for the current period. It’s projecting revenue of $4.5 billion to $5.3 billion, far below the $5.6 billion analysts expected, according to FactSet. Its stock lost 7.2 percent to $58.65.

Apple stopped making royalty payments to Qualcomm following a dispute between the companies, and later decided to stop using Qualcomm modems in some of its products. Qualcomm said both of those changes have hurt its results.

BONDS: Bond prices were steady. The yield on the 10-year Treasury note remained at 3.23 percent. The Federal Reserve will conclude its latest meeting Thursday and it’s not expected to raise interest rates, but traders will examine the central bank’s statement for signs about its plans for the economy. The Fed has been steadily raising rates over the last three years and is expected to increase its benchmark rate again in December.

Banks climbed as long-term interest rates remained near highest levels of this year. Bank of America gained 1.7 percent to $29.04 and U.S. Bancorp rose 1.1 percent to $53.15. The financial sector rose Wednesday, but not as much as the rest of the market.

High-dividend stocks fell. NextEra Energy lost 0.6 percent to $172.56 and timberland real estate owner Weyerhauser dipped 1.7 percent to $27.03. Those stocks climbed in October, as the rest of the market dropped, because investors consider them safe options, but they’ve faded recently as stocks stabilized and high-growth companies started to do better.

HOME WRECKED: D.R. Horton, one of the largest homebuilders, fell 5.7 percent to $35.44 after its earnings and sales fell short of Wall Street forecasts. The company said rising home prices and mortgage rates are affecting demand. That exact combination has been weighing on home sales and the stocks all year. Other homebuilders were mixed. PulteGroup fell 1.6 percent to $24.69 but NVR added 1.7 percent to $2,340.

WYNN LOSES: Wynn Resorts dropped 12.2 percent to $100.06 after the casino operator said its business in Macau has slowed down recently.

U.S. crude oil traded at around $76 a barrel in early October, its highest price in almost four years. It’s dropped almost 20 percent since then as government fuel stockpiles have expanded and U.S. issued waivers to a number of countries, allowing them to continue importing oil from Iran in spite of new sanctions on that country.

MONSTER MASHED: Monster Beverage slid 3.3 percent to $54.04 after it said Coca-Cola is developing two energy drinks that could compete with Monster’s products. The two companies have a partnership, and Monster said it believes Coca-Cola is not allowed to market the new products under that deal. It said Coca-Cola won’t start selling the drinks until April while the companies take the dispute to arbitration.