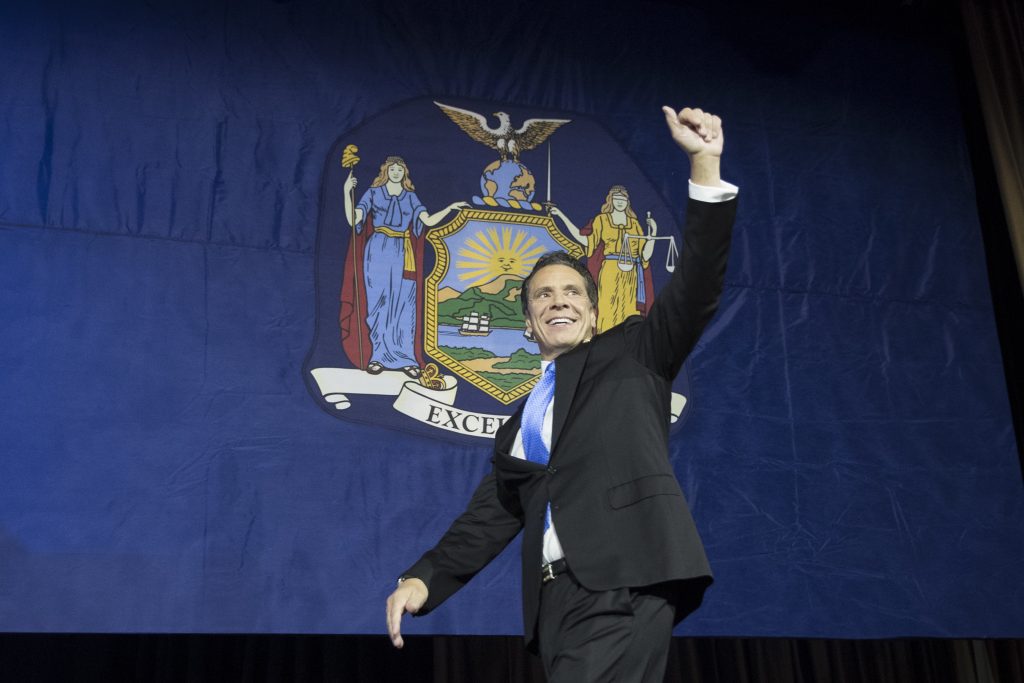 Key takeaways from the 2018 election in New York state:

DEMOCRATIC HOUSE GAINS: Democrat Max Rose defeated U.S. Rep. Dan Donovan, unseating the only Republican member of New York City’s congressional delegation. Rose is an Army veteran who was wounded in Afghanistan in 2013. He beat the odds in defeating Donovan in a district that covers Staten Island and a small part of Brooklyn. The district voted for Trump in the last election.

In the Hudson Valley, Democrat Antonio Delgado ousted freshman Republican U.S. Rep. John Faso. Delgado, who is black, won despite Republican ads calling him as a “big-city liberal” and claimed he denigrated women, police and American values during a brief rap career years ago. Delgado is a corporate lawyer and former Rhodes scholar who campaigned on universal access to Medicare, creating jobs and eliminating tax loopholes for the rich.

TOO CLOSE TO CALL: The closely watched congressional battle in central New York between Republican U.S. Rep. Claudia Tenney and Democratic challenger Anthony Brindisi wasn’t decided Wednesday morning. Each candidate had roughly half the vote with some remaining ballots still to be counted.

Further west, the contest between Republican U.S. Rep. Chris Collins and Democratic challenger Nate McMurray was also tight early Wednesday. Collins claimed victory, but McMurray’s campaign demanded a recount. Collins had dropped out of the race earlier this year after he was indicted on federal insider trading charges, but later got back in the race. He has pleaded not guilty.

MORE CUOMO: Cuomo’s re-election puts him in the company of Al Smith, Nelson Rockefeller, George Pataki and his own father, the late Mario Cuomo — all elected to at least three terms.

STATE SENATE: While votes are still being counted in some races, Democrats claimed victory in the state Senate, saying they expect to have a strong majority of the chamber’s 63 seats, thanks to big wins on Long Island.

Republicans conceded the loss of what was their last grasp on power in state government. Democrats will now control the Assembly, the Senate and all four statewide offices.

“While tonight’s results are disappointing, the Senate Republican Conference will continue to be a strong and important voice in Albany,” Republican Senate Leader John Flanagan said. “When we need to push back, we will push back. And where we can find common ground, we will always seek it.”

Sen. Andrea Stewart-Cousins of Yonkers is now in line to lead the Senate when the Legislature reconvenes in January.

“We will finally give New Yorkers the progressive leadership they have been demanding,” she said in a statement.

SIMCHA & SIMCHA: In Brooklyn, state Senator Simcha Felder easily won re-election. Felder, a Democrat who caucuses with the Republicans, ran on the Democratic, Republican, Conservative and Independent lines. While there were two token opponents running against him — Councilmember Jumaane D. Williams running on the Working Families Party and Reform Party candidate Luis Rivera — neither actually campaigned for the State Senate position.

Simcha Eichenstein was elected to the state Assembly, replacing the retiring Dov Hikind. Eichenstein, who ran unopposed, will become the first Chassidic statewide official in the United States when he takes office in January.

“At a time when we are seeing such vitriol and such hate on the national level, led by someone who is supposed to be a voice for all Americans, I am proud to stand here as a New Yorker who knows that it’s our diversity, our strength, our courage and our determination that makes us great,” she told supporters Tuesday.

OTHER NEW FACES: Democrat Joseph Morelle defeated Republican Jim Maxwell in the race to succeed the late U.S. Rep. Louise Slaughter in a district centered around Rochester. Democrat Alexandria Ocasio-Cortez will represent portions of Queens and the Bronx after defeating Republican Anthony Pappas.

New York City Council Speaker Corey Johnson demanded the resignation of the city’s Board of Elections director while many voters took to Twitter to ask lawmakers to approve for election reforms to authorize advance voting and make it easier to register to cast a ballot.